Assad's forces have killed tens of thousands and have allegedly used chemical weapons. Toppling him could wipe out the country’s Christians. Is it worth it?
Kevin P. Emmert|September 13, 2013 08:00 AM 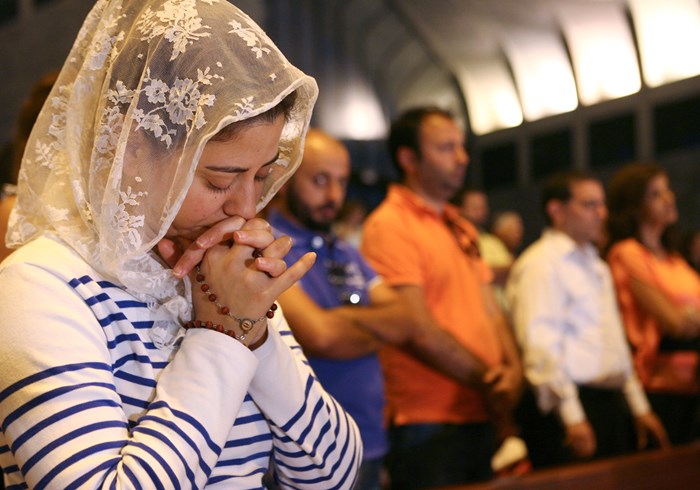 Compared to Christians in other countries in the Middle East, Christians in Syria have fared well under the protection of President Bashar al-Assad. But many have been threatened and killed by Islamist rebels amid Syria's recent political unrest. Now more than 450,000 Christians have fled their homes during more than two years of war.

Observers are generally united in thinking that an American attack on Syria would lead to increased persecution for Christians in the country, who make up 8 to 10 percent of the population.

As one Lebanese bishop told Al-Monitor, "Hear my words and take notes; the US strike on Syria has no guaranteed results whatsoever, neither on the military level nor on the political level or any other. The only certain and inevitable result is that the launch of the first rocket on Syria by NATO will be the end of Christians in this country. They will either be slaughtered or displaced."

Geoff Tunnicliffe, head of the World Evangelical Alliance, wrote to the White House and the United Nations that it's at least enough to argue against all U.S. military action. "There is a major consensus amongst the Christian leaders in this region that any military intervention by the United States will have a detrimental effect on the situation, and in particular for Christians in Syria," he said. "Christians have already been threatened in Syria by some of the opposition indicating that a post-regime Syria will be Muslim, and Christians will not be welcome."

Likewise, Eric Metaxas argued in a Breakpoint radio commentary this week that American Christian opposition to intervention is driven by concern for Syrian Christians. He approvingly quoted the Catholic Patriarch of Syria saying that "Salafist fundamentalist armed gangs of thugs … are far more dangerous even than destructive chemical weapons."

Daniel Heimbach, professor of ethics at Southeastern Baptist Theological Seminary, supports this sort of lobbying. "If the White House isn't concerned for a significant minority that we care about, then Christian leaders need to speak up to ensure the government is thinking about them," he said. "It is always appropriate to consider the harm that would be done to a minority, no matter how they are identified. Sometimes the interests of a minority might be against the common good. But I would argue that in this situation, that is not the case."

Indeed, exactly what outcome would benefit the common good is a matter of strong debate among Christian experts outside Syria.

"If America does nothing, it's quite possible that the civil war will spill over into Lebanon and Iraq—not to mention that thousands more will die," said Bryan McGraw, associate professor of politics at Wheaton College. "If we aid the rebels, it seems likely that we'll end up helping people who might be worse than Assad."

But others are more optimistic. Daniel Bell, professor of theology and ethics at Lutheran Theological Southern Seminary and author of Just War as Christian Discipleship, said Western Christians shouldn't presume that Syrian Christians would be wiped out if America performed a military strike. "Is this a confession that the church would and could do nothing to intervene in the face of genocide?" Bell said. Maybe so, he conceded: "The modern church's track record in the face of genocide is not particularly inspiring."

Still, how much should the U.S. shape its foreign policy around the interests of a religious minority? McGraw, a political theorist who specializes in religion and democracy, says the fate of Syria's Christians should at least play a role in the debate. "It's perfectly appropriate for Christians to highlight the plight of Christians in Syria and encourage American foreign policy to take that plight into account," he said. "But in just the same way that we shouldn't press for a domestic law that privileges Christians over against other groups (for example, Muslims), so too our foreign policy shouldn't be shaped to favor Christians as Christians. Instead, we should press the American government to use its considerable global influence to encourage governments around the world to do what they're supposed to do: maintain order and secure some reasonable sort of justice."

Robert Joustra, assistant professor of international studies at Redeemer University College and editorial fellow at Review of Faith & International Affairs, agrees. "It's important that America's interventions are perceived to be interventions that are pursuing broad-based solutions of justice, not just cherry-picking co-religious issues," he said.

Preston Sprinkle, author of Fight: A Case for Christian Non-Violence, said he opposes a military strike in large part because it would hurt the Christian church in the region. But it would hurt most others in the country, too. "Any U.S. intervention will result in a wave of violence, destruction, and death," he said. "The church should not only be concerned with the lives of innocent Syrians along with innocent Syrian Christians, the church should also follow the counterintuitive demands of their King and be concerned with all people—innocent and enemy alike—who still bear the image of God."

Gregg Frazer, professor of history and political studies at The Master's College, also advocates nonviolence—and also thinks Christians don't have to choose between supporting Syria's church and Syria's populace. "First, I do not believe that our Lord wants us to use military power or force of any kind to spread his light," he said. "Second, I do not believe that the plight of Syrians is our call to make. Third, I do believe that God is sovereign and cares more for Syria's Christians and non-Christians than we ever could. So, at the risk of seeming trite, I recommend fervent prayer that the will of the sovereign God be done."

Paul Rowe, associate professor of political and international studies at Trinity Western University, agrees. "Our thinking should not be guided by temporal questions of 'what is best' for Christians, but by more eternal questions of doing justice and loving mercy while walking humbly with God (Mic. 6:8)," he said. But that Syrian Christians should also be thinking about their present political allegiances. "Christians throughout the Middle East are called to serve their societies, and sometimes this comes at a great cost. It does Syrian Christians little good to stand by as their country is subjected to massive injustice. Because Christians across the Arab world are prosperous, middle class, and often a central part of the business class in Middle Eastern societies where their political influence is otherwise limited, they usually bear the worst costs of conflict when it comes. But they have suffered and continue to suffer just as their compatriots do under dictators."

Christians and their compatriots will suffer more under the rebels, said David Koyzis, a political scientist at Redeemer University College in Ontario. "It would be unconscionable to sacrifice a minority community for the supposed welfare of an entire nation," he said. "In fact, an Islamist Syria would be in no one's interest. Facilitating the coming to power of a regime that targets religious minorities would be an egregious violation of justice."

Facilitating a regime that uses Christians for its own ends is an egregious violation, too, said Bell: "The very idea that Christians would sacrifice others to a brutal dictator because that dictator might privilege Christians is an embarrassment to the gospel and it suggests—I hope and pray, falsely suggests—that Syrian Christians are far from being the light to the world. After all, what are Christians doing in the good graces of a brutal dictator?"

Bell isn't critical of Christians only in Syria: "Why have churches not been in serious conversation with our Syrian sisters and brothers years and decades before this regarding the repressive regime in Syria (and elsewhere)? It is our inaction that places us in a situation where many of us feel pressure to commit 'imperfect action.' This situation should prompt Christians to reconsider how we let our political imaginations and action be determined by the world's options and the world's arms."

The plight of local Christians "is one of the toughest issues in the Syrian situation," said Peter Feaver, professor of political science and public policy at Duke. "Ironically, over the last two decades the U.S. has gone to war most often in defense of oppressed Muslim groups—sometimes attacking regimes that had treated their Christian minorities comparatively better. The Muslims we came to the aid of were indeed victims, and helping them defend themselves was a noble and moral act. But one of the unintended consequences (for instance in Iraq) has been greater suffering by Christian groups in that area. This is a great tragedy and we, as a country, should be disturbed by it and moved to do more on behalf of suffering Christians around the world."

Joustra agrees, noting that the ongoing tragedy in Syria has created opportunities for the global church to respond to the Syrian refugee crisis—an estimated two million refugees have fled Syria, and approximately four million are displaced within Syria.