How LifeWay's unexpected findings compare to other assessments of Armageddon.
Jeremy Weber|September 13, 2013 04:25 PM 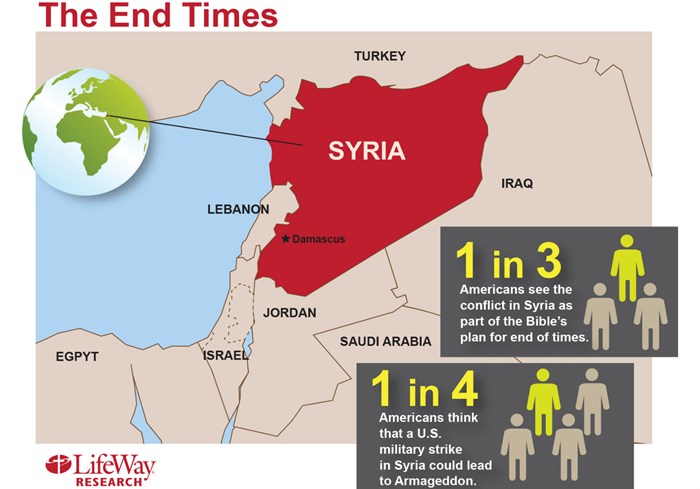 Should the United States bomb Syria? Your answer might depend on your eschatology (whether Christian or Muslim).

LifeWay Research noticed how the Syrian conflict has prompted discussion of the End Times (i.e. dispensationalism) unlike previous debates over American intervention in foreign affairs. So it did a survey and found some surprising results:

Almost one in three Americans see Syria's recent conflict as part of the Bible's plan for the end times.

One in four think that a U.S. military strike in Syria could lead to Armageddon.

One in five believes the world will end in their lifetime.

Ed Stetzer (now joined by Bob Smietana, previously at TheTennessean) explores the full results—inlcuding that women (36%) are more likely than men (28%) to link Syria and the Bible—in a post worth reading. But for comparison:

Barna recently found that "41 percent of all U.S. adults, 54 percent of Protestants, and 77 percent of evangelicals believe the world ...