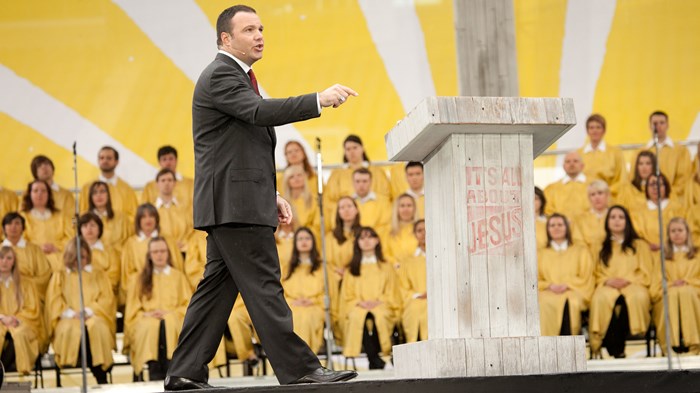 Mars Hill Church pastor Mark Driscoll in a letter to his congregation Friday apologized for controversial comments he made in an online discussion forum in 2000.

In Mars Hill's Midrash forum, posts from which resurfaced and circulated this week, Driscoll posted blunt and emotional comments critical of feminism, same-sex sexual behavior, and "sensitive emasculated" men, all under the pseudonym "William Wallace II."

"While the discussion board itself was a bad idea, my decision to attack critics who were posting there (I did so by posting under the character 'William Wallace II') was an even worse idea," Driscoll said in his letter Friday, provided to CT. "I was wrong to respond to people the way I did, using the language I used, and I am sorry for it and remain embarrassed by it."

In his 2006 book, Confessions of a Reformission Rev, Driscoll acknowledged and apologized that he posted to the forum under the pseudonym in response to postings from "emerging-church-type feminists and liberals."

"I went on the site and posted as William Wallace II, after the great Scottish man portrayed in the movie Braveheart, and attacked those who were posting. It got insane," he said in the book. "This season was messy and I sinned and cussed a lot, but God somehow drew a straight line with my crooked Philistine stick. I had a good mission, but some of my tactics were born out of anger and burnout, and I did a lot of harm and damage while attracting a lot of attention."

In his Friday apology, Driscoll noted that, in his 2006 book, he used the forum posts as an example of "something I regretted and an example of a wrong I had learned from."

"The content of my postings to that discussion board does not reflect how I feel, or how I would conduct myself today," he told his church members Friday. "Over the past 14 years I have changed, and, by God's grace, hope to continue to change. I also hope people I have offended and disappointed will forgive me."

Several bloggers, including frequent Driscoll critics Warren Throckmorton and Wenatchee the Hatchet, posted links to "William Wallace II" comments over the past week. The discussion also surfaced in a 541-member Facebook group for Mars Hill critics, where it garnered more than 150 comments. Members of that group have planned a "peaceful protest" for Sunday at Mars Hill's Bellevue campus, where Driscoll preaches in person.

The Seattle P-I reports that former members of the church plan to carry signs reading "Question Mark" protesting claims that Driscoll does not know the identities of his critics because they have chosen to remain anonymous. On the event's Facebook page, 25 people have indicated they will attend.

CT's previous reports on Mark Driscoll, the provocateur pastor seeing success in Seattle, include: how Tyndale Publishers defended Driscoll in a dispute last fall over whether the pastor had plagiarized in his 2013 book A Call to Resurgence; how the pastor paid a marketing company more than $200,000 to push his 2012 book Real Marriage to the New York Times bestseller list in a move his church later called "unwise," but not "uncommon or illegal"; and how Driscoll this past March retracted the book's bestseller status and announced a hiatus from social media. CT also interviewed Driscoll and his wife Grace about the marriage book.