A few countries give China, where a campaign to de-Christianize city skylines continues, some competition.
Kate Tracy|August 5, 2014 12:22 PM 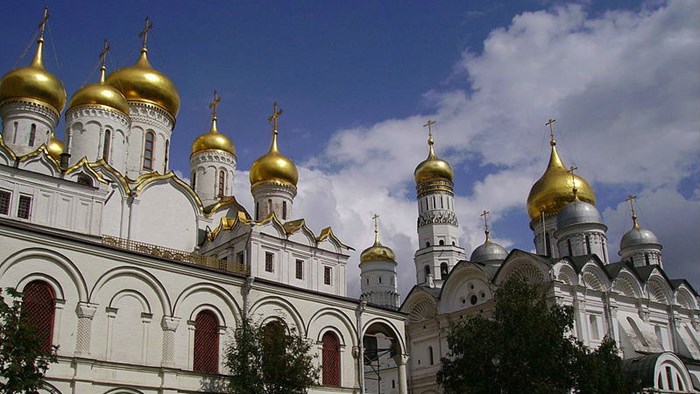 Inside the Kremlin, Russian President Vladimir Putin plans to rebuild two monasteries and a church torn down by Stalin about 85 years ago. But as Russia rebuilds churches with one hand, with the other it's been knocking them down.

While a campaign in China to de-Christianize city skylines has drawn the most international attention this summer, Pew Research Center recently calculated the world's 34 countries with the most government destruction of religious property (as of 2012). Three countries topped the list, with 100 or more incidents: China, Russia, and Tajikistan.

Overall, government damage to religious property occurs most often in the Middle East and North Africa, while in the Asia-Pacific region, 16 of 60 countries had government infringement on their property, according to Pew.

Some countries are systematic, others sporadic. Tajikistan, for example, topped the 2012 list because its government shut down more than 100 mosques due to improper documentation.

Open Doors has also calculated the destruction of Christian property in light of religious violence around the world. Between the months of November 2012 and March 2014, the persecution watchdog found that 3,641 churches and Christian properties were destroyed.

The four hardest-hit countries: Nigeria (with 1,539 cases, Egypt (with 829 cases), Pakistan (with 217 cases), and Syria (with 207 cases). Syria and Egypt lined up in Pew's second-tier ranking of countries with 10 to 99 cases of religious property damage, while Nigeria and Egypt were in Pew's third-tier ranking, with one to nine cases reported.

Conversely, Tajikistan ranks No. 45 among the 50 countries where it's hardest to be a Christian, while China ranks No. 37 and Russia does not rank.

Open Doors's tally includes houses and Christians' personal property, as small factions often create chaos by targeting Christian property. One unexpected discovery of the group's survey of religious violence was that South American countries such as Colombia and Mexico—countries that don't even rank among the top 50 worst places of persecution—have high rates of church property damage. Colombia had 177 cases and Mexico had 36 during the latest reporting period.

According to Ronald Boyd-MacMillan, chief strategy officer for Open Doors, this indicates that religious violence is more a product of state factions, rather than the overall state itself. "Violence—while it is an important form of persecution—is also used to try to create a deeper form of persecution, creating a situation where the apparatus of the state is used to control and dominate the church," he said. 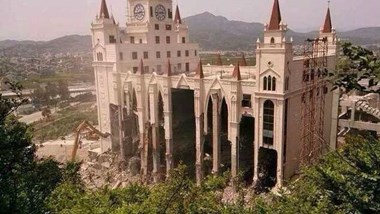 The other countries rounding out Open Doors' top 10 list for religious violence were the Central African Republic, India, Kenya, and Iraq, all with less than 100 incidents of Christian property destruction.

CT recently reported on how China has been lifting high the cross (right off 60-plus churches) in cities where Christians are concentrated, including the destruction of an eight-story megachurch. Such incidents continue: Church members managed to prevent police from removing one cross, though dozens of people were injured.

One Chinese pastor even locked himself in the tower of his church this July on a hunger strike against the destruction of churches. Zhan Yingsheng, pastor of the Salvation Church, claimed in an open letter that Chinese subordinates compete with each other for the number of crosses they get taken down, in order to gain favor from their superiors. 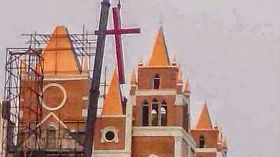 "Whenever I see this, my heart bleeds," he wrote. "That's why I've decided today to go live in the clock tower under the cross of the church to pray and to fast with my Bible and hymns."

Meanwhile, Sudan also gained some attention for its crackdown on churches in light of the closely watched apostasy case of Meriam Ibrahim. CT noted how the African nation recently reaffirmed its church-building ban as well as demolished a few existing ones. However, Sudan ranks low on Pew's list, with only one to nine incidents of religious property damage in 2012.

CT regularly reports on church demolitions and attacks, including a devastating church bombing in Peshawar, Pakistan, and a grenade attack on Kenya churches. Conversely, CT also noted how one of Europe's poorest countries was building a new church every three days.