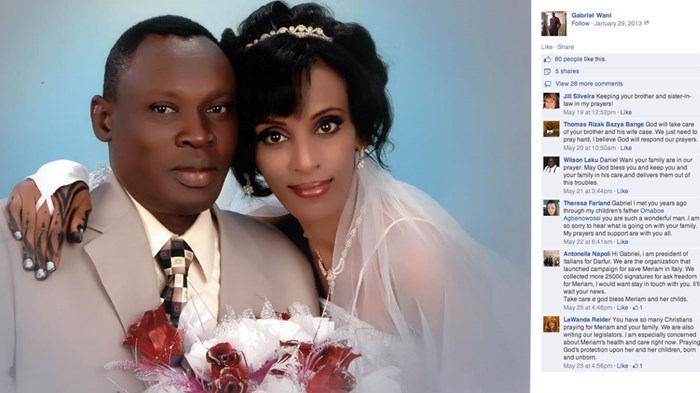 Update (June 2): Many media outlets circulated the BBC's report this weekend that Sudanese authorities would soon free Meriam Ibrahim from prison. However, CNN reported that her fate remains a decision for the appeals court, and Sudan's foreign ministry later explained the same, claiming an official's words were misinterpreted.

Update (May 29): A second Sudanese Christian woman has been arrested for apostasy, reports Morning Star News (MSN), which first broke the story of Ibrahim's plight. MSN explores the parallels between Ibrahim's case and that of 37-year-old Faiza Abdalla, who has yet to be convicted.

As advocates for the Sudanese mother sentenced to death for not renouncing her Christian faith topped more than 1 million, Meriam Yahia Ibrahim Ishag gave birth early this morning to a baby girl in a Khartoum prison hospital wing.

So reports Christian Solidarity Worldwide (CSW), as well as her lawyer Elshareef Ali to the BBC. The 27-year-old mother sentenced to death for apostasy named her little girl Maya, according to The Telegraph.

Sudanese authorities are allowing Ibrahim two years to nurse her daughter before they will carry out the death sentence. Ibrahim's lawyers lodged an appeal last week, according to CSW.

Meanwhile, advocates decry the actions of the Sudanese government in convicting Ibrahim of apostasy and adultery, punishable by hanging and 100 lashes. So far, more than 620,000 actions have been taken via Amnesty International to appeal Ibrahim's death sentence. A Change.org petition has gathered more than 414,000 signatures, while the American Center for Law and Justice (ACLJ) has gathered more than 236,000 signatures.

The Sudanese Embassy in Washington, D.C. released a statement:

This case remains a legal issue and not a religious or a political one. It is unwise and dangerous to politicize the issue at hand to spur religious tension between the two peaceful faiths with similar foundations. Notably, It is important to emphasize that freedom of choice is the cornerstone of both Islam and Christianity.

Her husband, Daniel Wani, who is wheelchair-bound and suffers from muscular dystrophy, immigrated to New Hampshire with his brother, Gabriel, in 1998. He became a U.S. citizen in 2005, reports the New Hampshire Union Leader. However, Daniel has been in Khartoum for the past year in support of his wife and son.

The U.S. embassy released its own statement May 15, the day Ibrahim appeared before the court and refused to recant:

We are deeply disturbed over the sentencing today of Meriam Yahya Ibrahim Ishag to death by hanging for apostasy. We are also deeply concerned by the flogging sentence for adultery. We understand that the court sentence can be appealed.

We continue to call upon the Government of Sudan to respect the right to freedom of religion, a right which is enshrined in Sudan's own 2005 Interim Constitution as well as international human rights law.

We call on the Sudanese legal authorities to approach this case with the compassion that is in keeping with the values of the Sudanese people.

Additionally, four U.S. senators have officially condemned Sudan's charges against Ibrahim: Marco Rubio from Florida, Jim Inhofe from Oklahoma, Chris Coons from Delaware, and Bob Menendez from New Jersey. In a U.S. Senate resolution, they encouraged the State Department and the United States Agency for International Development "to continue their support for initiatives worldwide that support religious freedom." They call on the Sudanese government to include protection for religious freedom in a new constitution that President Omar Hassan al-Bashir pledged in January to write.

"We also urge you and President Obama to reappoint an Ambassador at Large for International Religious Freedom, whose primary purpose is to monitor, prevent, and respond to this exact type of incident," the letter stated.

U.N. human rights experts have condemned the death sentence and its rejection of international law.

"According to international law," they said, "The death penalty may only be imposed for 'the most serious crimes', if at all. Choosing and/or changing one's religion is not a crime at all; on the contrary, it is a basic human right."

Details surrounding why Ibrahim's half-brother and half-sister filed suit against her in the first place have emerged from the Daily Mail.

Here is the Government of Sudan's full statement:

The Embassy of the Republic of the Sudan in Washington DC has noticed with regret some of the official statements and media coverage on the case of the Sudanese citizen Mariam Ibrahim Yahia; as some of them have mistakenly accused the government of Sudan of violating human rights by depriving Mariam of her civil rights as a Sudanese citizen. In this regard, the Embassy would like to confirm the following:

The official records of the Government of Sudan indicates that the real name of the lady mentioned in this case as Mariam Ibrahim is actually ' Abrar Elhadi Muhammad Abdallah Abugadeen' and there is no official record shows that her name was changed to Mariam Ibrahim Yahia. Abrar was born in um Shagrah in Algadarif state on Jan. Ist. 1986 to Muslim Sudanese parents and the claim that the mother is an Orthodox Christian from Ethiopia is untrue.

There was no Government agency behind the case; rather her immediate family had reported their daughter as missing, later and after she was found and claimed that she is Christian, the family filed a case of apostasy against her.

The ruling of the judge was made at the primary court after hearing all parties involved since February 2014, and it is subject to be implemented in at least two years if confirmed by three levels of courts which are: Appeal Court, Supreme Court and finally the Constitutional Court. The Judiciary System in Sudan is independent, and the Sudanese Judges are qualified and dignified.

This case remains a legal issue and not a religious or a political one. It is unwise and dangerous to politicize the issue at hand to spur religious tension between the two peaceful faiths with similar foundations. Notably, It is important to emphasize that freedom of choice is the cornerstone of both Islam and Christianity.

While reaffirming the commitment of the Government of Sudan to all human rights and freedom of beliefs, the Embassy of Sudan in Washington DC would like to thank all those who have raised their concern and sympathy on this issue.