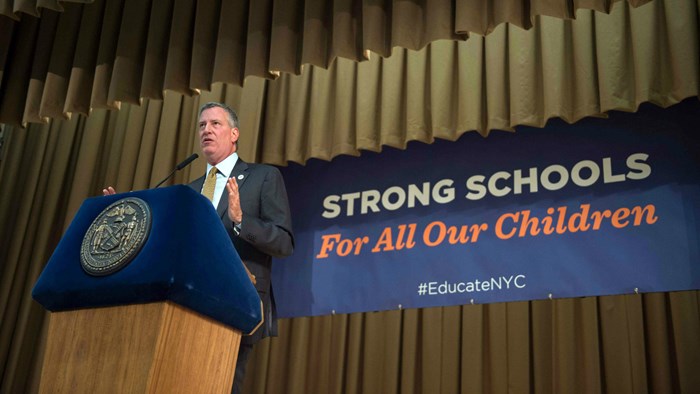 Update (Feb. 2): In response to the NYC mayor's office, the lead church in question (Bronx Household of Faith) has also filed a brief, arguing that religious groups shouldn’t be the only community groups barred from meeting in public schools.

“The Department did not need to open its facilities for after-hours nongovernmental uses, but it did. Now it must abide by constitutional rules forbidding express discrimination against religious expression and practices in otherwise permissible uses,” the brief said.

“The city’s arguments in defense of this policy cannot withstand constitutional scrutiny,” Alliance Defending Freedom attorney Jordan Lorence added in a statement. “Evicting churches and the help they offer the people in their communities through their worship services in otherwise empty buildings on weekends helps no one. Violating the First Amendment, as New York City is doing, hurts everyone.”

When Bill de Blasio campaigned against Joe Lhota in 2013 to become mayor of New York City, he promised to reverse a highly contested city policy that prohibited churches from renting public schools for worship services. In response, religious voters helped de Blasio trounce his opposition with 73 percent of the vote.

But after de Blasio took office in January 2014, he didn’t make the change, even though it could be done executively.

“I stand by my belief that a faith organization playing by the same rules as any community non-profit deserves access,” de Blasio said in a press conference last April. But five months later, the policy was still in place, and the Bronx Household of Faith petitioned the US Supreme Court to overturn an appeals court’s ruling that the city’s ban is constitutional. De Blasio’s press secretary toldWorld at the time that his “position on this issue has not changed.” Yet the mayor made no move to change the policy.

This month, de Blasio’s administration filed a legal brief in opposition to the Bronx Household of Faith’s petition, arguing in favor of the city’s policy. “[It] does not involve any government-imposed prohibition, restraint, or burden on religious exercise,” the brief stated.

Prohibiting worship services is “viewpoint neutral,” the New York City Board of Education argued. It is reasonable because churches renting public school space are receiving a “substantial subsidy” from the government (since they don’t have to rent more expensive retail space), and because worship services in public schools foster the “perception of ‘state-sponsored Christian churches,’” the brief said.

Because public schools are a “limited public form” as opposed to an “open public forum,” they are allowed to “impose restrictions on speech that are reasonable and viewpoint-neutral,” the brief said.

As of April 2012, about 100 congregations were seeking permits to hold worship services in city schools, the city said.

“The City brief argued its case using a somewhat obscure twist to a recent Supreme Court decision to allowing a town council in upstate New York to have mostly Christian clergy to offer opening prayers because few other clergy of a different religion live in the area," wrote Tony Carnes, editor of A Journey Through NYC Religions, in breaking the news. "The city said that the New York City public schools can prohibit worship services ‘simply because all religions do not hold them.’” (CT covered that upstate case, Green v. Galloway, and offered an opinion from a constitutional law scholar here.)

The Journey team partnered with a Colgate University class to survey NYC passersby if they thought worship in public schools was a violation of church/state separation. Two-thirds said it was not.

De Blasio has otherwise been friendly to church-state interaction.

The mayor has been urging religious schools to host the state-sponsored pre-kindergarten programs he fought for since public schools don’t have enough capacity. Religious schools can teach religious texts if they are “presented objectively as part of a secular program of instruction” as part of one’s culture, city officials said.

In addition, de Blasio announced the city was giving $8 million to faith-based and community groups for afterschool programs for middle-schoolers.

“With thousands of new seats added for our City’s youth at diverse non-public schools and community centers citywide, more of our parents and families can rest assured their children have positive alternatives during a key period of their lives,” de Blasio said. The 18 school-based programs are all faith-based. (The 31 center-based programs are not.)

CT has reported on the legal wrangling over NYC public school space, including protests of New York pastors (one started a hunger strike). Tim Keller called the attempt to oust churches "unwise." CT also editorialized on the issue, and Ed Stetzer explained on his CT blog three reasons why schools should still rent to churches.