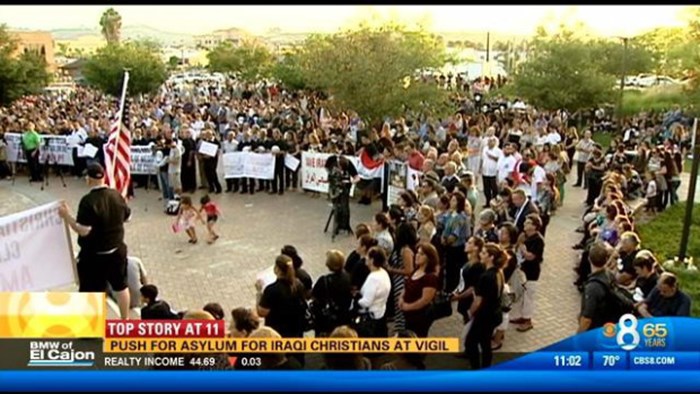 The Chaldeans have been held for more than six months in detention by Homeland Security. They were arrested earlier this year for using false documents to enter the United States from Mexico, according to the San Diego Union-Tribune.

Five other Iraqi Christians will be tried for immigration fraud. Seven detainees have already been deported.

The Iraqi Christians told US officials that they were fleeing persecution at home. However, most had already been granted safe haven by Germany, Sweden and other European countries before coming to America.

“Asylum is for emergencies only,” Ginger Jacobs, a San Diego attorney, told the Union-Tribune. “There are many, many people fleeing Iraq for bona fide emergency reasons. But if somebody is able to live as a citizen in a country like Germany or the United Kingdom or Australia, then they don’t necessarily deserve an emergency remedy such as asylum.”

The Chaldean detainees are being held in a San Diego detention center run by US Immigration and Customs Enforcement.

A number of activists and churches from nearby El Cajon, California, have protested the treatment of the detainees. About 60,000 Chaldeans live near El Cajon, making it a natural draw from asylum seekers.

The city is a destination for an underground railroad operated by Mark Arabo, founder of the Minority Humanitarian Foundation, a nonprofit that seeks safe passage for Iraqi Christians fleeing ISIS.

For a reported cost of $25,000 a family, Arabo’s organization helps Iraqis flee to Mexico and then enter the US.

Arabo told a local television station that his group has helped transport about 300 Iraqi Christians to San Diego. He said that Iraq no longer issues visas for travelers to the US, so there’s no way for Iraqi Christians to flee their country legally.

“The underground railroad wasn’t our first choice. It was our last choice,” Arabo told the Union Tribune.

“I would not leave people in the hands of smugglers,” said Besma Coda, chief operating officer of Chaldean & Middle-Eastern Social Services, told the Union Tribune.

The 15 Chaldeans in California aren’t the first to run afoul of immigration laws in recent years.

Robert DeKelaita, a prominent Chaldean immigrant, was arrested in 2014 for allegedly falsifying asylum requests, according to a federal indictment.

DeKelaita, an immigration attorney, has helped hundreds of Iraqi Christians apply for asylum, according to The Christian Science Monitor.

"These are my people. I don't even have to ask them what they've been through," he told the Monitor in 2008.

"My heart is really wedded to the idea that they should be safe and secure in their own homeland in Iraq," DeKelaita told the Los Angeles Times in 2008. "What I'm doing is temporary. That's how I justify it to myself--that they will one day all go back home safely to their homeland."

DeKelaita has denied any wrongdoing.

So far, supporters have raised $4,401. They’ve also produced a five-minute video explaining DeKelaita’s side of the story.

His trial has postponed till 2016.

CT has covered the legal challenges that Christian refugees face when seeking asylum in the US.

In 2013, employees of 10 New York law firms were charged with immigration fraud after they coached asylum seekers to make up fake stories of religious persecution.