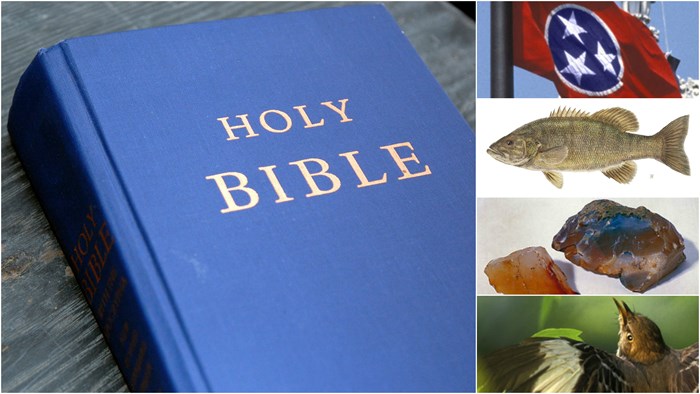 Image: Steve Snodgrass / Flickr | TN.gov
The Bible will not join these other Tennessee state symbols.

Tennessee’s bid to become the first American state to make the Bible its official book came to an end today, after lawmakers failed to override the governor’s veto.

The bill acknowledged the Bible’s “historical and cultural” importance to the Volunteer State, including economically: “… printing the Bible is a multimillion-dollar industry for the state with many top Bible publishers headquartered in Nashville, including Thomas Nelson, Gideons International, and United Methodist Publishing House.”

The state House and Senate passed the motion, but Governor Bill Haslam vetoed it last week. After nearly two hours of discussion on Wednesday, representatives failed to amass enough votes to override him.

Haslam, who is a Christian, explained that not only would the bill violate the establishment clause of the First Amendment, but that it “trivializes the Bible, which I believe is a sacred text.”

“If we believe that the Bible is the inspired word of God, then we shouldn’t be recognizing it only as a book of historical and economic significance,” he wrote to Tennessee’s speaker of the house. “If we are recognizing the Bible as a sacred text, then we are violating the Constitution of the United States and the Constitution of the State of Tennessee by designating it as the official state book.”

As part of CT’s Under Discussion series, we asked several experts to weigh in. Is it worth finding a lowest common denominator (such as historic or economic significance) with non-Christians in order to gain the Bible more honor in the public square? Or is “neutering” the Bible of its sacred status too high a price to pay for more prominence?

Here’s how experts weighed in:

“I think this veto is disappointing in that it will not allow the Bible’s impact on our culture and society to be more widely recognized. It seems to me that the idea of protecting the sanctity of the Bible is being used to escape taking a stand for the self-evident but politically charged positive role of the Bible in society.”
~Carl Moeller, CEO, Biblica

“While I respect the spirit behind the governor's decision, we can at the same time acknowledge the Bible’s historic importance and cultural influence without diminishing its spiritual value. There is no question that the Bible has informed centuries of literature, government, philosophy and social behavior, both here in the United States and around the world. Part of ensuring the continued place of the Bible in American life is highlighting its contributions to many different aspects of our society, most importantly our individual spiritual lives.”
~Roy Peterson, president and CEO, American Bible Society

“Focusing on the Bible’s historical and cultural significance doesn’t necessarily trivialize it. Public schools, for example, can and should teach students about those aspects of the Bible in order for them to understand our culture. My problem with designating it the ‘official’ state book, however, is that it’s false to claim that the state is making that designation simply because of the Bible’s historical/cultural significance. Declaring an ‘official state book’ (unlike declaring a state flower or bird) is inevitably making a statement about the truth and the moral authority of the book. I don’t think it does us any credit as Christians to deny that. And declaring the Bible ‘official[ly]’ correct is an establishment of religion. Again, that’s quite different from teaching in public schools about the Bible and its influence on our culture.”
~Tom Berg, law professor, University of St. Thomas School of Law (Minnesota)

“Honoring the Bible for its historical and economic impact desacralizes the Bible—it denies the sacred. Historical and economic impact is not why anyone cares about the Bible, and not why the legislature passed the bill. It’s an official government statement that the Bible is principally important for something quite different from why Christians think it is important. Nor does this maneuver find a lowest common denominator with non-Christians. They don’t take comfort from the legislature honoring the Bible for a reason they could in theory agree with. They just see the legislature as telling an obvious lie. Here come the Christians again, using government to promote their religious beliefs, and with a cover story that no one believes for a minute. ‘Thou shall not take the name of the Lord thy God in vain.’ And probably not his scriptures either. When government promotes the Bible or any other ritual or symbol of Christianity, either it does so for a serious religious reason, promoting the truth of Christianity and by unavoidable implication, the falsity of other faiths, or it takes that book, ritual, or symbol in vain.”
~Douglas Laycock, law professor, University of Virginia Law School

CT previously asked a similar question on whether memorial crosses should be considered secular not sacred symbols.

Recent Under Discussion topics include:

Should Christians Give Money to Ministries Deep in Debt?

Should Churches Dim the Lights for Worship?

Should Unaccredited Bible Colleges Be Allowed to Grant Degrees?

Does My Local Church Have Authority to Declare That I Am Not a Christian?