Here's how 1,000 Protestant clergy disagree on the rapture, the Antichrist, and other points of eschatology.
Bob Smietana - Facts and Trends|April 26, 2016 09:22 AM 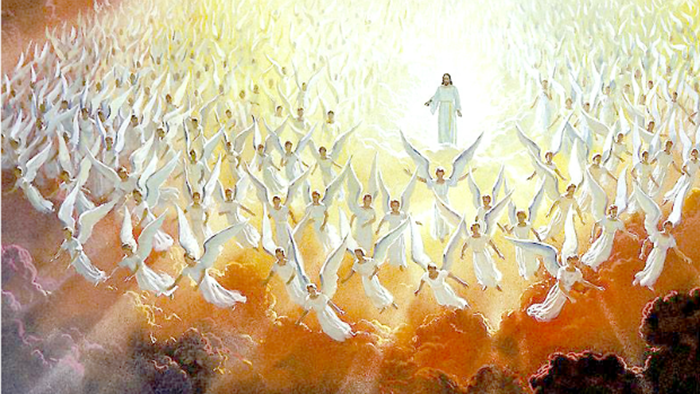 Most Protestant pastors believe Jesus will return in the future. But few agree about the details of the apocalypse.

A third of America’s Protestant pastors expect Christians to be raptured—or taken up in the sky to meet Jesus—as the end times begin. About half think a false messiah known as the Antichrist will appear sometime in the future.

A surprising number think the Antichrist has already been here, or isn’t on his way at all.

Those are among the findings of a new telephone survey of 1,000 Protestant senior pastors and their views on end-times theology from Nashville-based LifeWay Research, sponsored by Charisma House Book Group.

End-times theology remains popular with churchgoers, says Scott McConnell, vice president of LifeWay Research. But it’s not an easy topic to preach about.

“Most people want their pastor to preach about the Book of Revelation and the end of the world,” he says. “But that’s a complicated task. Pastors and the scholars they cite often disagree about how the end times will unfold.” 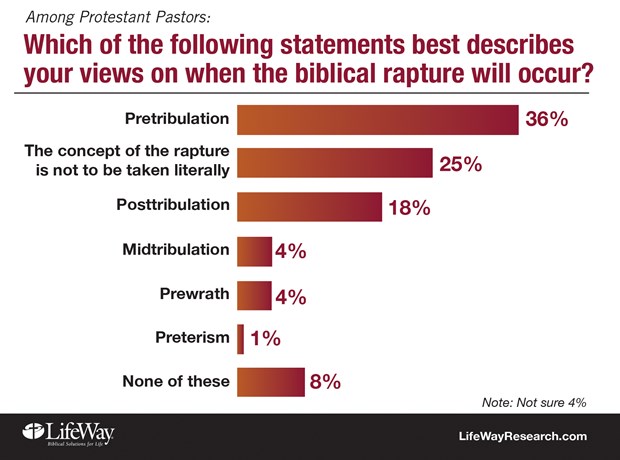 No consensus about the rapture

About a third (36%) of Protestant senior pastors believe in the kind of pretribulation rapture familiar to pop culture. In that scenario, Christians disappear at the start of the apocalypse. Those left behind suffer great trouble or tribulation.

Among pastors, 1 in 4 say the rapture is not literal. Almost 1 in 5 think the rapture happens after the tribulation (18%). A few believe the rapture already happened (1%), or that it will occur during the tribulation (4%), or before the wrath of God is poured out on the earth (4%). Others don’t agree with any of these views (8%), or aren’t sure what will happen (4%).

Mainline Protestant pastors (36%) are more likely to say the rapture isn’t literal. Pastors who hold this view include about half of Lutherans (60%), Methodists (48%), and Presbyterian/Reformed pastors (49%). Few Baptist (6%) or Pentecostal pastors (less than 1%) hold this view.

Evangelicals overall (43%) are more likely to believe in a pretribulation rapture.

Education and age also play a role in how pastors view the rapture. Pastors with a master’s degree (33%) or a doctorate (29%) are more likely to say the rapture isn’t literal than those with no degree (6%) or a bachelor’s (16%). 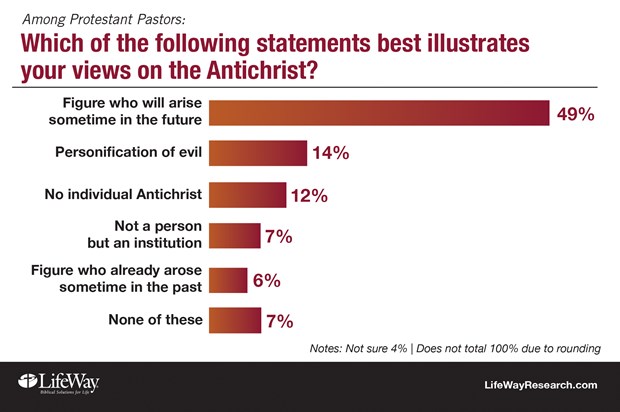 Most expect the Antichrist, disagree on timing

About half of pastors (49%) say the Antichrist is a figure who will arise in the future. Others say there is no individual Antichrist (12%), that he is a personification of evil (14%), or an institution (7%). Six percent say the Antichrist has already been here.

Baptists (75%) and Pentecostals (83%) are most likely to see a future Antichrist. Lutherans (29%), Methodists (28%), and Presbyterian/Reformed pastors (31%) are more likely to see the Antichrist as a personification of evil.

Education also played a role in how pastors see the Antichrist. Two-thirds of those with no college degree (68%) or a bachelor’s (63%) believe in a future Antichrist figure. Fewer than half of those with a master’s (39%) or a doctorate (49%) hold that view.

Pastors also disagree about the details of the millennial kingdom.

One in 10 (11%) believe in postmillennialism—the idea that the world will gradually become more Christian until Jesus returns.

Most pastors were split by denomination:

Billy Hallowell, author of the upcoming book The Armageddon Code: One Journalist's Quest for End-Times Answers, said the research quantifies the prevalence of different end-times theories.

“I’m hoping the data opens a discussion about preachers’ eschatological beliefs, why they hold those ideas, and how congregants and faith leaders can better understand the biblical texts,” he said.

McConnell says it’s not a bad thing that pastors disagree on the details of the apocalypse. Most agree on the main teachings about the Second Coming. The rest of the details don’t affect the day-to-day life of most Christians.

“The big picture of Revelation is clear—Jesus returns, people must be ready, evil is defeated,” he says. “With the rest of the details, there is room for disagreement.”

The phone survey of Protestant pastors was conducted Jan. 8-22, 2016. These questions were sponsored by Charisma House Book Group. The calling list was a random sample stratified by church size drawn from a list of all Protestant churches. Each interview was conducted with the senior pastor, minister or priest of the church called. Responses were weighted by region to more accurately reflect the population. The completed sample is 1,000 surveys. The sample provides 95 percent confidence that the sampling error does not exceed plus or minus 3.1 percent. Margins of error are higher in sub-groups. The full survey report is available at LifeWayResearch.com.