Can more Bible reading make the presidential election more civil if Trump’s favorite verse is ‘an eye for an eye?’
Sarah Eekhoff Zylstra|April 29, 2016 11:03 AM 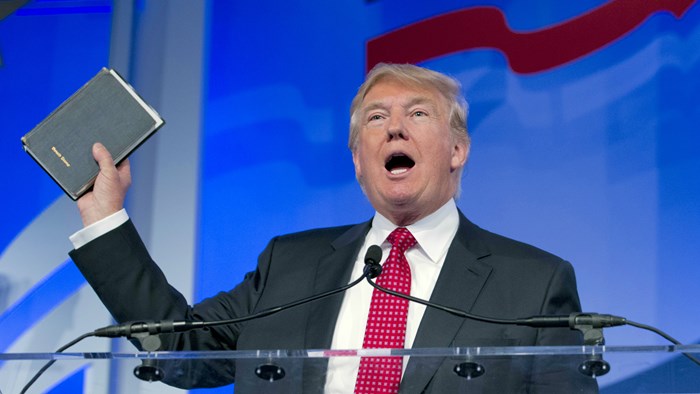 Starting Sunday, the entire Bible will be read aloud in 90 hours on Capitol Hill. Hundreds will make their way to the 27th annual reading at the US Capitol, where 100 English and foreign language versions of the Bible will be available.

Former presidential candidate Ben Carson recently told reporter Rita Cosby that his advice to Republican frontrunner Donald Trump on handling his temper was to “read the Bible and pray and learn how to put yourself in other peoples’ shoes.” (Trump recently said his favorite Bible verse is “an eye for an eye.”)

But not even regular Bible reading could make Trump and other presidential contenders more civil, believe 44 percent of Americans.

That’s an increase from 40 percent last year, according to the 2016 State of the Bible report from the American Bible Society (ABS), conducted by Barna Group.

Only 51 percent of Americans said politics would be more civil if politicians read the Bible regularly, down from 56 percent last year.

Only practicing Protestants (those who identify as Protestant, attend church at least once a month, and say their faith is very important to them) thought the Bible was especially needed this year: 86 percent said politicians would be more civil if they read their Bible regularly, up from 81 percent in 2015.

Less likely to think regular Bible reading would make politicians more civil were practicing Catholics (63%, down from 70% last year) and non-practicing Christians (43%, down from 54%).

Nearly three-quarters of practicing Protestants (72%) said the Bible should have a larger impact on society, down from 74 percent last year.

Just under a third of Americans (30%) and about a quarter of practicing Protestants (24%) believe the Bible has just the right amount of influence in public society.

CT covered the highlights of the 2015 State of the Bible report, as well as the rise of Bible skeptics in the 2014 ABS report and which Bible translation is the most popular. (Hint: It isn’t the NIV.)

ABS and Barna also partner on picking America's most Bible-minded cities. CT examined how ABS's study compares to other rankings.