The Gambia’s president has declared it so. Not everyone is convinced.
Morgan Lee|February 18, 2016 11:31 AM 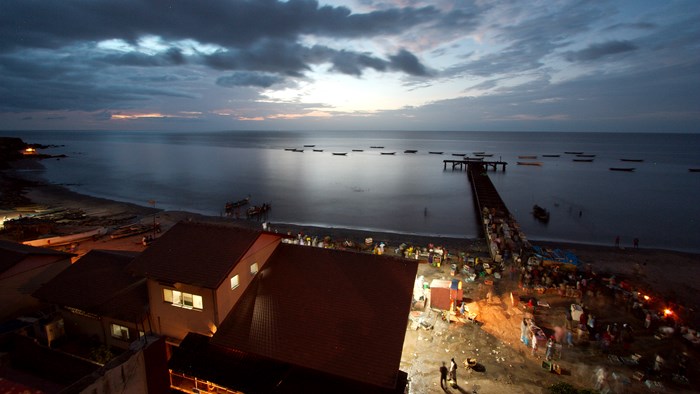 Today, the river nation of The Gambia is celebrating its 51st year of independence. Is it doing so as Africa's second official Islamic state?

"Accepting Allah's religion as your religion and as your way of life is not negotiable," said President Yahya Jammeh in December. He said declaring his country an Islamic state was "in line with the country's religious identity and values."

Gambia’s opposition leader objected to the announcement, arguing that Gambia is a secular state, and a change must be constitutionally confirmed.

"You cannot make such a declaration without going through a referendum," said National Reconciliation Party leader Hamat Bah.

"This is an affront to the Constitution of the Gambia, which is based on secular traditions and does not entertain the establishment of any religion as a state religion," said one response.

The Gambia Supreme Islamic Council organized a 300-person conference earlier this month. Attendees—which included representatives from the vice president's office—defended the president's declaration and called for peace among Muslims and between Muslims and those of other faiths.

Jammeh hastened to reassure the Christian minority that this did not jeopardize their freedom to practice their faith.

"Let me make it very clear: that does not mean Christians cannot worship in their way of life,” he said. “Christians should be given their own respect; the way they celebrate Christmas or whatever will continue. In our relationship with all the rest of the religions, nobody has the right to interfere with their way of life."

There will be no dress requirements as a result of this status, the president said.

“I have not appointed anybody as an Islamic policeman," Jammeh said. "The way women dress is not your business; you are Muslim she is a Muslim; you should not tell her how she should dress, it is not your business, in the next world you cannot defend her.”

But just weeks after his declaration, Jammeh issued an executive order banning all female civil employees from having their hair uncovered at work.

Female staff were "no longer allowed to expose their hair during official working hours" and should "use head tie and neatly wrap their hair," the memo said.

The directive lasted just over a week, and drew the ire of opposition and pro-democracy groups.

"The decision is abandoned," Jammeh said in a statement to state radio, adding that women are his "best friends" and his "sisters” and that he was concerned for "their well-being in all circumstances."

"Consequently, this decision that makes them unhappy has been lifted," he said, saying that the ban had "nothing to do with religion."

Jammeh said the decision to declare the country an Islamic state was a response to the current reality in Gambia, a British colony until 1965.

"As Muslims are the majority in the country, Gambia cannot afford to continue the colonial legacy," he said.

Bounded by the overwhelmingly Muslim Senegal, Christians make up about 5 percent of Gambia’s 1.7 million population. More than half of this group is Catholic, while Protestants make up 1.5 percent of the total population, according to 2010 data from the Pew Research Center’s Global Religious Futures project.

Jammeh has been in power since his coup in 1994, and has a “deplorable human rights record and rampant corruption” which lost him Western support, said Human Rights Watch’s Jeffrey Smith.

"As such, he is desperately attempting to foster a closer and more lucrative relationship with the Arab world,” Smith told Al-Jazeera. “By couching his decision in terms of 'fighting colonialism,' we can see that he is trying to cozy up with other parts of the world that harbor anti-West sentiments."

“There are so many countries in Africa that have a Muslim majority, yet they are not Islamic states,” wrote Mendy in an op-ed, naming Senegal, Mali, Somalia, Algeria, Tunisia, and Egypt as examples.

In Morocco, where Gambia’s First Lady is from, more than 99 percent of the popular is Muslim, yet it isn’t an Islamic state, he said.

“Having a majority should not validate claiming ownership of a whole,” he said.

Jammeh's decision could be a ploy to divert attention away from the country's tanking economy, suggested Adolphus Washington, who studies African politics. Or it could be another way for the president to hold onto power.

"For instance, if The Gambia were to adopt a structure akin to Iran's Islamic Republic in which the Supreme Leader is the single most powerful official, Jammeh could seek this position, giving him even more dominance over executive, legislative and judicial branches of government as well as the military and media," wrote Washington.

Gambia was not listed on Open Door’s 2016 World Watch List, and is described as a “religiously tolerant country” in the religious freedom watchdog’s 2014 report on the world's hardest places to be a Christian.

“Not only is the constitution secular, the present government has so far defended its position on religious tolerance with unwavering commitment,” Open Doors stated. When one Islamist group tried to veil girls at Roman Catholic schools and another beat up girls and women for not dressing to Islamic requirements, “the government came down hard on those involved,” Open Doors stated.

In November, Jammeh banned female genital mutilation because it was not commanded in the Qur'an.

“Yet, Islamic extremism as a persecution engine is present in the country,” Open Doors stated. “Non‐violent measures are taken to Islamize the country, particularly the educational system/institutions, public institutions, media, and marriage/family.”

In 2003, the Cato Institute identified Gambia as one of 46 countries that discriminates against non-Muslims because of its severe limits on free expression and assembly, penalties for apostasy and blasphemy, ban on advocating for secularism, and Islamic religious privilege.

In 2007, Philip Yancey wrote about Lamin Sanneh, a Gambian-born Yale historian and missiologist, and his take on colonialism’s legacy:

Strangely enough, Sanneh points out, from the Muslim perspective "colonialism did more to aid Islam than all jihads put together." Queen Victoria's representatives in Africa saw local imams and muftis as a socially stabilizing force and built up their power, even to the extent of passing laws against conversion to Christianity.

CT previously interviewed Sanneh about his conversion, Muslim-Christian relations, Anglican troubles, and the future of Christianity. CT has also spoken with him about his book, Abolitionists Abroad: American Blacks and the Making of Modern West Africa, a story of the freed slaves who brought Christ—and liberty—to West Africa.