Survey studies how American Protestants are engaging the refugee crisis, and why many are not.
Bob Smietana - Facts and Trends|February 29, 2016 09:25 AM
Image: Steve Jeter / World Vision
Churches Are Twice as Likely to Fear Refugees as to Help Them

When it comes to helping refugees, Protestant churches and their pastors are often separated by faith and fear.

Most pastors say Christians should lend a hand to refugees and foreigners, and most believe caring for refugees is a privilege.

But pastors also say their churches are twice as likely to fear refugees as they are to help them, according to a new survey from LifeWay Research.

“Pastors believe Scripture tells Christians to care for refugees and foreigners,” said Ed Stetzer, executive director of the Nashville-based organization. “Yet many admit their church is not involved in such ministry.”

The telephone survey of 1,000 Protestant senior pastors, conducted in January, was sponsored by World Relief and World Vision. [Many of its findings appear in CT’s March cover story on why Christians in Iraq and Greece see hope on the refugee highway.]

About 20 million people worldwide—including 4 million refugees from Syria alone—are refugees, according to World Relief, which has resettled refugees for decades. The United States plans to resettle 85,000 refugees in 2016, including 10,000 from Syria.

Researchers found widespread support among pastors for the idea of helping refugees. 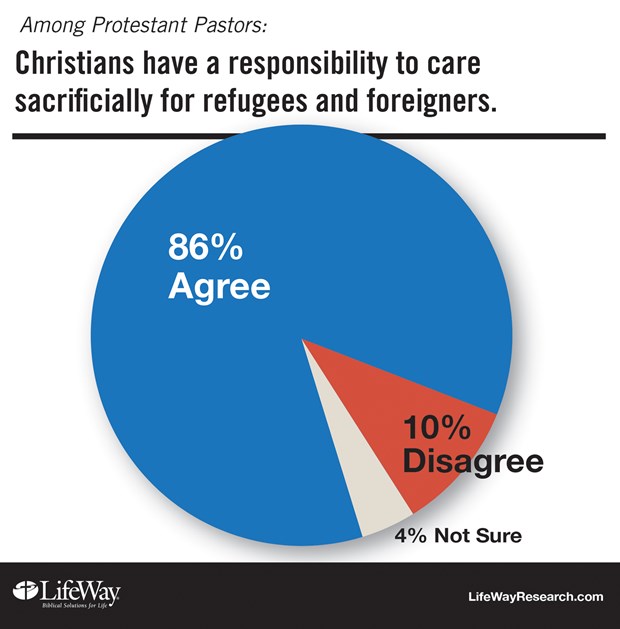 More than 8 in 10 (86%) agree that Christians should “care sacrificially for refugees and foreigners.” Only 1 in 10 disagree.

While 80 percent of pastors consider it a privilege to care for refugees, about 1 in 8 (13%) disagree.

Two-thirds (67%) say the United States can balance national security interests with compassion when assisting refugees. About a quarter (28%) are skeptical. Six percent are not sure.

Among pastors, 1 in 5 (19­­%) say their church is he­­lping refugees overseas, and 1 in 3 (35%) have addressed the Syrian refugee crisis from the pulpit. More than 4 in 10 (44%) believe there is a sense of fear in their church about refugees coming to the United States. 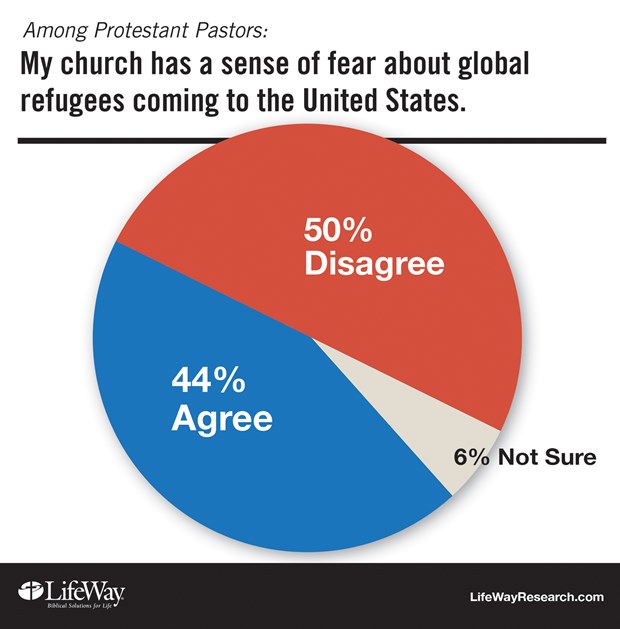 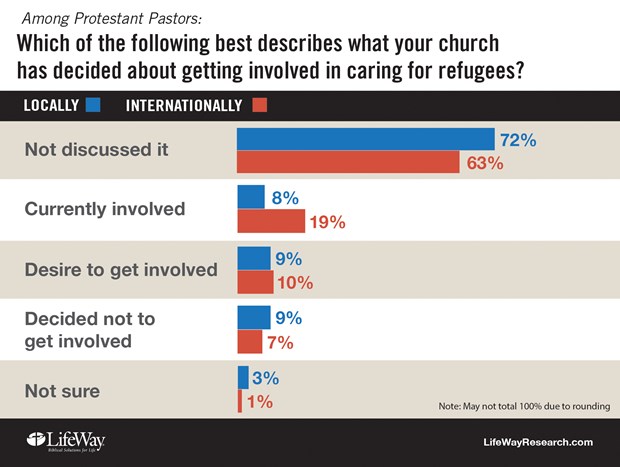 “It’s encouraging to see the American church understands God’s call to serve and care for refugees and foreigners, but what’s needed now is action,” said Richard Stearns, president of World Vision. “This is a test of the relevance of the church in our world.”

Pastors from different denominations disagree about how to respond to refugees, according to LifeWay Research.

About half of Baptist (56%) and Pentecostal (50%) pastors say there’s a sense of fear in their church about refugees coming to the United States. So do a third of Lutheran pastors (33%) and about 3 in 10 Presbyterian pastors (29%).

White pastors (46%) are most likely to say their congregations are fearful of refugees than pastors of other ethnicities (33%). They are also more likely to have discussed the Syrian refugee crisis from the pulpit (37%) than other pastors.

More churches may get involved with helping refugees in the future, according to LifeWay Research.

Nine percent of pastors say their churches want to get involved in helping refugees locally. A similar number (10%) wants to assist refugees overseas.

“This important research affirms that church leaders broadly agree our faith compels us to care sacrificially for refugees, but also finds that relatively few congregations are actively engaged in doing so,” said Stephan Bauman, president of World Relief.

Methodology: LifeWay Research is a Nashville-based, evangelical research firm that specializes in surveys about faith in culture and matters that affect churches. The telephone survey of Protestant pastors was conducted January 8-22, 2016. The calling list was a stratified random sample drawn from a list of all Protestant churches. Each interview was conducted with the senior pastor, minister or priest of the church called. Responses were weighted to reflect the geographic distribution of Protestant churches. The completed sample is 1,000 phone interviews. The sample provides 95 percent confidence that the sampling error does not exceed plus or minus 3.1 percent. Margins of error are higher in sub-groups.