2014 was the world's worst year for the persecution of Christians in the modern era. Until 2015 surpassed it.

The 2016 World Watch List (WWL) from Open Doors analyzes how African countries now outnumber Mideast countries on the list, affecting far more Christians numerically (though not as severely). Christian martyrdoms and destruction of churches nearly doubled during the "Year of Fear," yet only 4 of the top 10 persecuting countries rank among the 10 most violent ones. Meanwhile, the spread in severity among top persecutors shrank by half, and five countries that would have qualified for last year's list did not make this year's list because the minimum threshold of persecution is up 50 percent since 2014.

The annual list studies pressures on private, family, community, national, and church areas of life, plus levels of violence, in order to rank the top 50 countries where "Christians face the most persecution." [Full list below.]

"Open Doors USA predicted that while Christians faced the worst persecution in modern history in 2014, the worst was yet to come," the organization stated. "The prediction was sadly fulfilled in 2015—the persecution of Christians increased on every continent."

More than 7,000 Christians were killed for their faith last year, up drastically from 4,344 in 2014 and 2,123 in 2013. Those numbers don’t include North Korea or parts of Iraq and Syria, where accurate numbers are hard to obtain, Open Doors said. All three of those countries are among the WWL's top five persecutors.

In addition, 2,400 churches were damaged or attacked worldwide, more than twice the number in 2014.

Violent Islamic extremism was the main culprit, "with its rise being the lead generator of persecution for 35 out of the 50 nations on the list," stated Open Doors. "Its two hubs are in the Middle East and sub-Saharan Africa, regions where persecution has risen to a level akin to ethnic cleansing."

The report agrees with the US State Department assessment in October, which pointed to the "new phenomenon" of non-state terrorism as the biggest threat to minority Christian communities.

In addition to death and destruction, Islamic extremists caused the displacement of thousands of Christians. Syria’s largest Christian city, Aleppo, saw its Christian population shrink from 400,000 to 60,000, while more than 1 million refugees fled from the Horn of Africa and the Middle East to Europe, Open Doors said.

"Governments became more fearful of Islamic extremism and responded by either (a) boosting nationalism as a counter-force or (b) tightening regulations and increasing surveillance over all religious expression," the report said. In addition, "Muslims throughout the world are becoming more Islamic out of fear that extremists may take over their areas and that [ISIS] sleeper cells may wake."

And as organizations such as ISIS, Boko Haram, or al-Shabaab push out existing governmental structures, the lack of organized law enforcement leads to "minorities suffering at the hands of violent groups," the report said.

North Korea remained the No. 1 perpetrator of persecution in 2015, as it has since the WWL began 14 years ago. Up to 70,000 Christians are in labor camps there, Open Doors said. One of them is Toronto megachurch pastor Hyeon-Soo Lim, who was sentenced to life in prison this year after making hundreds of humanitarian trips to the poverty-stricken country. [One North Korean escapee shared his testimony with CT.]

The WWL data is taken from reports from November 1, 2014, to October 31, 2015. The annual list is audited by the International Institute for Religious Freedom.

"Persecution of Christians is more than just physical violence," it stated. "It’s a complex, multifaceted phenomenon that involves many aspects such as various forms of cultural marginalization, government discrimination, hindrances on conversion, hindrances on participation in public affairs and restrictions on church life."

The authoritarian Eritrean regime "has consistently supported the rise and spread of radical Islam in the Horn of Africa," Open Doors said. Of the 15,000 Eritrean refugees resettled in the US in the past 12 years, 85 percent were Christians.

"Evangelical and Pentecostal Protestants routinely are tortured and pressed to recant their faith," wrote Robert George and Thomas Reese, members of the US Commission on International Religious Freedom (USCIRF), for the Christian Science Monitor.

"The country has become uninhabitable," one refugee told Open Doors. After receiving a 500-page report on Eritrea’s abuses last summer, the UN Human Rights Council extended its inquiry for another year, focusing on whether the "systematic, widespread, and gross violations of human rights" may add up to "crimes against humanity."

Open Doors noted that "16 of the 50 countries on the 2016 WWL are African, outnumbering the 14 countries from the Middle East and Persian Gulf. When the list is expanded to 65 countries, a further nine African nations are added." Analyst Ronald Boyd-McMillan said, “In numerical terms at least, though not in degree, the persecution of Christians in this region dwarfs what is happening in the Middle East.”

India ranked among the top 20 for the first time, thanks to Hindu extremists emboldened by the new government of Narendra Modi.

Only 4 of the 10 countries with the worst persecution levels overlapped with the most violent countries, according to Open Doors. Nigeria and Pakistan topped the violence list, followed by Iraq, Syria, Myanmar, Central African Republic, Egypt, Mexico, Sudan, and India.

While lower on the list, countries in Central Asia "saw a sharp deterioration in their religious freedom" last year. Tajikistan (No. 31, up from No. 45) and Azerbaijan (No. 34, up from No. 46) were two of this year’s "significant risers," Open Doors said.

Uzbekistan (No. 15) and Turkmenistan (No. 19) are also listed as countries of particular concern by the State Department, along with North Korea, Iran, Eritrea, Myanmar (Burma), China, Saudi Arabia, and Sudan.

Last year, Mauritania was the bottom country on the WWL, scoring a 50. On this year's list, however, five countries—including Mauritania again, plus the Democratic Republic of Congo, Nepal, Sri Lanka, and Chad—received a score of 50 or higher and did not make the list. Open Doors noted that the 50th country on the 2013 list registered 35 points, while No. 50 on the 2016 list registered 53 points—a rise of almost 50 percent.

The news isn’t all bad, reported World Watch Monitor. After a dictatorial Buddhist president was defeated in Sri Lanka, state-sanctioned violence seems to be decreasing. Many of the 120,000 Christians who fled from ISIS are now safely harbored in Kurdish Iraq. Mexican pastors are effectively praying against drug lords, a Muslim security guard sacrificed himself to stop suicide bombers approaching a church in Pakistan, and Muslims and Christians are cooperating with each other in refugee camps in Jordan and Lebanon.

And in the biggest apology ever for Christian persecution by other Christians, 145 global church leaders met in Albania last year and said they were sorry for having abused each other.

“There is an Indian saying, ‘Children only throw stones at a ripe mango tree,’” WWM said. “And persecuted Christians the world over will often say, ‘We are persecuted because we are doing something right, and this persecution shows we are ripe fruit for Christ.’”

World Watch Monitor also offered an infographic with every country's score and ranking over the past three years.

CT covered the 2015 WWL, which found the greatest number of religious freedom violations against Christians worldwide in recent memory. The 2014 WWL found that twice as many Christians were killed for their faith in 2013 as in 2012.

Among other coverage of persecution and international religious freedom in 2015, CT reported how Libya’s martyrs witnessed to Egypt, how the video of a 10-year-old forgiving ISIS went viral, and why there were only 53 Christians among America’s 2,184 Syrian refugees. CT also covered why the US deported Iraqi Christians, why Christians are fleeing one of Africa’s oldest and largest Christian homelands, and how the government continued to "de-Christianize" the skyline of China’s Jerusalem. 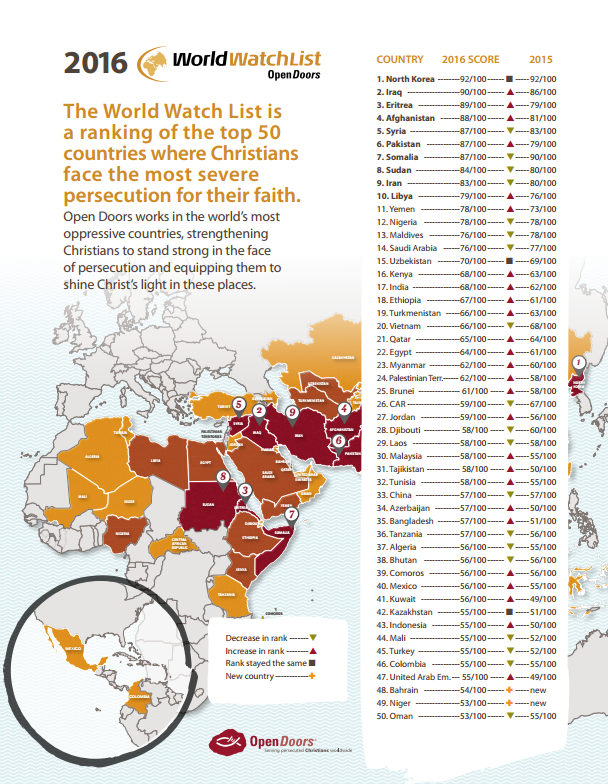