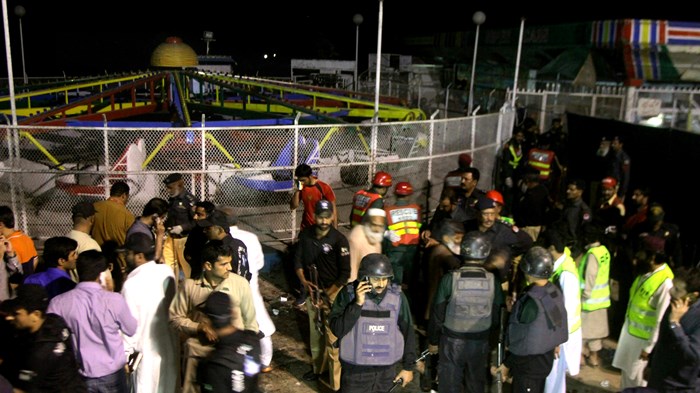 Update (Mar. 28): While a Pakistani Taliban faction claims it targeted Christians in Sunday’s attack on the children’s area of a major park in Lahore, a large number of non-Christians also died.

The final tally remains unclear, but approximately 14 of the victims were Christians while the majority have been identified as Muslims, according to the Associated Press (AP) as well asThe Washington Post. Morning Star News reports the Christian fatalities may be closer to 45.

At least 29 of the overall deaths were “children enjoying an Easter weekend outing,” according to Reuters, while the number of people wounded has surpassed 300.

“Many of these are believed to be Christians as it is a common tradition for families to go to a local funfair to celebrate the birth of Christ after their Easter devotions,” reports the British Pakistani Christian Association. It says 29 of the victims were Christians.

Peter Jacob, a Lahore-based Christian human rights activist, said the Christian community took precautions in the week leading up to Easter Sunday and that government forces had provided security to major Christian neighborhoods in the city. But witnesses said the park was a soft target, with scant security on Sunday evening.

Meanwhile, Islamist supporters of Mumtaz Qadri continued a second day of protests in Pakistan’s capital. They demanded that imprisoned Asia Bibi [see below for more details] also be hanged, reports the Associated Press.

The Post offers a strong summary of the plight of Pakistan’s Christians. The BBC offers an explainer, as does the AP. NPR examines Pakistan’s struggle to stop militants.

CT recently reported how many persecuted Pakistani Christians flee to Thailand, only to face fresh troubles as refugees and risk being sent back home.

The Taliban-linked attack in Lahore comes one year after two suicide bombers from the same Taliban faction targeted Lenten services in the city’s largest Christian neighborhood. While the final death toll of Christians and non-Christians remains to be tallied, today’s attack will likely be the deadliest assault on Pakistan’s Christian minority since the symbolic bombing of Peshawar’s All Saints Church in 2013.

The Easter incident made Pope Francis’ Easter appeal for peace amid global terrorism all the more poignant.

One of Lahore’s largest parks, Gulshan-e-Iqbal is “a popular site for members of Lahore's Christian community, many of whom had gone there to celebrate the Easter weekend holiday,” reports Reuters. The evening crowd was “unusually large” because of Easter, an official told Pakistani newspaper Dawn.

A faction of the Pakistani Taliban, Jamaat-ul-Ahrar, took credit for the attack and said it deliberately “targeted the Christian festival of Easter,” reports the Wall Street Journal.

The attack was Pakistan’s deadliest overall “since the December 2014 massacre at an army-run school that left 143 people dead, most of them children, and marked a devastating new turn in militant violence against Pakistani civilians,” reports the Los Angeles Times. (Xinhua has more details, as doesThe Express Tribune.)

Five years ago, Punjab governor Salmaan Taseer—one of the most prominent supporters of Bibi and critics of the blasphemy laws which sentenced her to death—was assassinated by his bodyguard. In October, Pakistan’s Supreme Court upheld the conviction of the bodyguard, Mumtaz Qadri, and sentenced him to death. In February, Qadri was hung.

The execution was good news for Pakistani Christians—who are often the target of the country’s blasphemy laws—and their advocates. However, the execution led an estimated 10,000 of Qadri’s supporters to protest, marching into the capital city of Islamabad.

“Sunday was the 40th day since Mr. Qadri’s execution, a mourning observance called Chaliswan in Pakistan, and drew his supporters into the streets of a number of cities,” reportsThe New York Times (NYT).

“It was very difficult to imagine if Pakistan would be able to follow the due course of justice, but the country has shown its will," Qadri prosecutor Saif-ul-Malook told World Watch Monitor after the bodyguard’s death sentence was carried out. "The execution has strengthened the fight against extremism.”

Malook also represents Bibi—whose formal name is Aasiya Noreen—after she was sentenced to death for blasphemy after an argument over a cup of water. Two years after Noreen was first accused of breaking the country’s blasphemy laws, Taseer, leader of Pakistan’s largest province, began speaking up on her behalf. Months later, he was assassinated.

After the Supreme Court upheld Qadri’s conviction last fall, Christians expressed tentative optimism in the face of a blasphemy boom.

“This is just the beginning,” said Rufus Solomon, a Christian politician, told Morning Star News. “The Supreme Court decision is a very strong sign that the state is trying to recover the space it ceded to violent extremists.”

In its judgment against Qadri, the Supreme Court warned against the misuse of blasphemy charges.

Few believed that the government would actually go through with Qadri’s death sentence. Despite the verdict and execution, public sympathies appeared to lie with Qadri.

For killing Taseer, clerics declared Mr. Qadri a ghazi or warrior. A mosque in Islamabad was named after him. Support for him among the 500,000-strong armed forces was so strong that the army chief at the time told foreign ambassadors that he was unable to issue a condemnation.

“The government is doing its best to keep Noreen safe,” the official said. “Only her husband is allowed to meet her in jail, and she has been told to cook her own food to prevent any attempt at poisoning her meals. All guards deployed for her security have been carefully vetted by intelligence agencies and other security outfits to ensure that they are not extremists in their belief.”

The government will not bow to pressure from Islamist extremists, he said. “[Qadri’s] hanging is a message to all those who take the law into their own hands in the name of religion.”

In related news, Pakistani Catholics have begun collecting testimony to declare Shahbaz Bhatti, a Christian politician and outspoken critic of the country’s blasphemy laws, a martyr. He was assassinated two months after Taseer.

Open Doors’s 2016 World Watch List ranks Pakistan No. 6 among countries where it’s hardest to be a Christian. Last year during Lent, suicide bombings at two churches in Lahore’s Youhanabad neighborhood sparked violent protests from Christians angry at their government’s lack of protection. Christian leaders later publicly asked for forgiveness. (One year later, advocates are still dismayed that no one has been held accountable.)

Lahore's Joseph Colony suffered a mob attack in March 2013. Elsewhere in the province of Punjab, a village mob burned alive a Christian man and his pregnant wife in November 2014. In 2009, eight Christians were killed by mob violence in Gojra.

CT has regularly reported on Pakistan, its blasphemy laws, and resulting major incidents of persecution.