The new permanent ESV echoes the example of the KJV.
Sarah Eekhoff Zylstra|September 9, 2016 10:45 AM 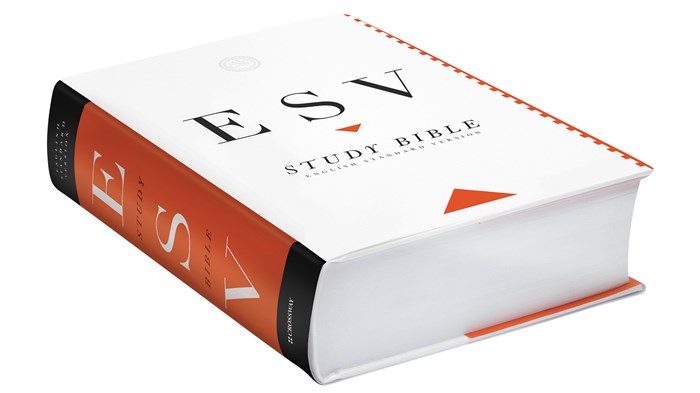 A popular Bible translation is now literally the unchanging Word of God.

The English Standard Version (ESV) received its final update this summer, 17 years after it was first authorized by Crossway, its publisher.

The translation oversight committee changed just 52 words across 29 verses—out of more than 775,000 words across more than 31,000 verses—for the final “permanent text” edition. The board then voted, unanimously, to make the text “unchanged forever, in perpetuity.”

The ESV is following the example of a much older—and surprisingly popular—translation.

“The text of the ESV Bible will remain unchanged in all future editions printed and published by Crossway—in much the same way that the King James Version (KJV) has remained unchanged ever since the final KJV text was established almost 250 years ago (in 1769),” Crossway stated on its website.

One difference: While the ESV copyright is held universally by Crossway, the KJV copyright held by the Crown of England is only valid in the United Kingdom. So modified versions of the KJV have been popping up in the United States and elsewhere for several hundred years. (CT has explored whether copyrights help or hurt Bible translation.)

That won’t happen with the ESV, which, like the KJV, aims to be an “essentially literal,” or word-for-word, translation. Other translations focus on finding and translating each passage’s thought or meaning.

Two of the ESV’s final changes were in Genesis, and evoked a slightly more complementarian reading.

The translation committee also changed “epileptic” to the broader “those having seizures” twice in the Gospel of Matthew.

Other slight changes included switching “mind” and “heart” to “heart” and “soul” in 1 Kings and 2 Chronicles, and reversing “rescued” and “delivered” in Psalm 18:48.

“In making these final changes, the Crossway board of directors and the translation oversight committee thus affirm that their highest responsibility is to ‘guard the deposit entrusted to you’ (1 Tim. 6:20)—to guard and preserve the very words of God as translated in the ESV Bible,” Crossway wrote.

By most counts, the ESV is the third most popular Bible translation in America, after the KJV and the New International Version (NIV). More than 100 million printed copies have been distributed since the ESV was first published in 2001, including 30 million last year.

About 8 percent of American adults, and a surprising 15 percent of millennials, prefer it, according to the 2015 State of the Bible report from the American Bible Society and Barna Group.

The ESV has become the third most requested translation for those doing Google searches for Bible verses, according to an analysis by OpenBible.info. 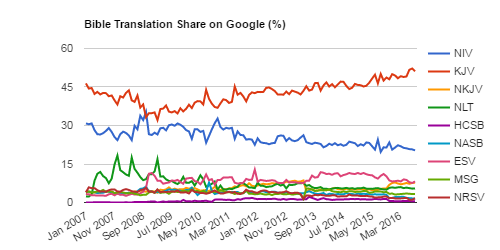 This chart estimates the monthly share of Google searches for Bible translations.

The ESV also holds its own among members of the National Association of Evangelicals (NAE), according to a 2014 survey of NAE leaders. 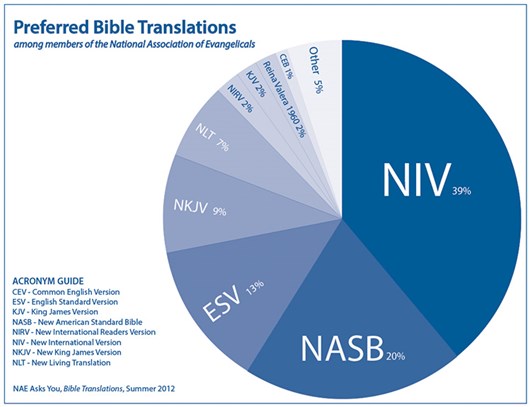 “People who love the ESV Bible can have full confidence in the ESV, knowing that it will continue to be published as is, without being changed, for the rest of their lives, and for generations to come,” Crossway wrote.

1 of 2
This chart estimates the monthly share of Google searches for Bible translations.
expand