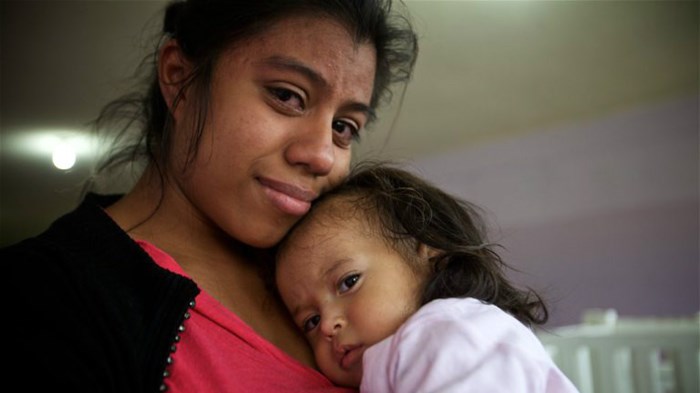 Image: Ronnie Mosley
This teen mom in Guatemala is unable to live at home due to violence.

Earlier this month, a fire at an orphanage outside of Guatemala’s capital caught international attention. Forty children died of carbon monoxide poisoning and burns; the tragic event drew worldwide condemnation.

But the aftermath of the fire has given hope to those who work with the Central American country’s orphans. As the government turns to evangelicals for help, it seems the tragedy may spark the breakthrough many have been praying for.

In some ways, the tragic blaze—set intentionally by children locked in the overcrowded facility—was not unexpected by evangelical experts. In 2006, Orphan Outreach founder Mike Douris told the Guatemalan government that the orphanage’s design wasn’t a good idea.

The government went ahead and built it anyway—another link in a chain of wrong moves. For decades, Guatemala has had some of the worst child welfare practices on the planet.

In 2015, the country had the second-highest rate of child murders in the world. Of the crimes against children that get reported—including murder, rape, kidnapping—most go unpunished (88%). An estimated 2 in 5 children are malnourished. Among indigenous children, that rises to 4 in 5. Tales of overcrowding, abuse, and malnutrition leak out of orphanages like the one near the nation’s capital, Guatemala City, where dozens died in the recent fire.

The infamous orphanage, the Virgen de la Asunción, was built for 400 children but housed about 750. Inside, orphans were physically and sexually abused by staff and by other children. There were complaints about water leaks and poor food quality. Only 3 of the 64 security cameras in the building were working.

The conditions resemble fellow public orphanages, which house about 1,200 children in Guatemala. At least three times as many live in private orphanages (about 4,000), but that’s still a small fraction of the 370,000 orphans that UNICEF estimates live in the country. Since Guatemala has no foster care system and very few domestic adoptions, virtually every child removed from a neglectful or abusive situation is sent to an orphanage. Many more live on the streets.

“The public orphanages generally have too many kids and not enough funding,” said Douris, an evangelical leader who has been working in Guatemala since 2001. “So you have numerous children in places that are massively understaffed. The directors just do the best they can with what they have. They can request more staff and more money, but it doesn’t get allocated.”

When Guatemala’s then-First Lady showed Douris the map of Virgen de la Asunción before it was built, he told her it was a bad idea. “They were mixing all the populations [such as children detained for criminal behavior, taken from abusive families, or abandoned],” he said. “We already knew how bad public orphanages were, and we knew the mixing of the populations wasn’t going to be handled well. It was a recipe for disaster.”

He was right; Virgen de la Asunción has been one disaster after another. One employee is on trial for rape; another has already been convicted. Between 2012 and 2016, 45 instances of abuse were reported. Last fall, the orphanage was ordered to begin moving children back home or to other shelters in preparation to be shut down. It wasn’t the first time a shutdown was recommended; and it also wasn’t the first time nothing happened in response. The secretary of social welfare, Carlos Rodas, appealed the decision. Without anywhere else to go, the children stayed.

On the evening of March 7, some of the children rioted, heading up to the roof and threatening social workers with dismantled bunk beds, Rodas told reporters. A number of them—reports vary between 60 and 85—jumped from the roof to the wall to the trees, then took off.

Police recaptured most of them, and between 50 and 60 girls were locked in a classroom. Neighbors heard them yelling for pills or a knife to commit suicide. After six hours, the girls set fire to a mattress in an attempt to force someone to open the door.

The fire spread from one foam mattress to another; survivors allege that the police who were guarding them did nothing to help. When the doors were finally opened, 19 bodies of girls aged 13 to 17 were pulled from the rubble. Over the next few days, 21 more died from injuries.

Then, the Guatemalan government finally promised change. “It's obvious that our system must be thoroughly and decisively reformed,” Guatemalan president Jimmy Morales told reporters. Morales is an evangelical—and a former comedian—in a country that’s 95 percent Christian.

So maybe it’s no surprise that the people he’s asking for help are also evangelicals.

“The day of the fire, I got a text from one of the advisers for the First Lady,” Axia de López, an adoption advocate in Guatemala and the daughter-in-law of influential megachurch pastor Jorge López, told CT. The adviser asked if she’d be willing to meet the next day.

She was. So were members of World Vision, Buckner International, and International Justice Mission. They talked to the government about adoption and foster care, though López cautioned against leaping into the latter. “The country is not ready for it. You’ll have more trauma and heartbreak if we don’t have good professional support for the families.”

The conversation was encouraging. “They are actually listening to us,” she said.

They’re also taking action. Virgen de la Ascunsion was immediately shut down. Rodas was arrested, along with his deputy secretary and the orphanage’s director, and charged with homicide, breach of duties, and mistreatment of minors.

Rodas had only been in place for three months; deputy secretary Anahy Keller was a television producer with no experience caring for children.

And that’s a big part of the problem, Douris said. In Guatemala, each presidential election signals an entire staff overhaul as the new leader passes out positions to his friends. Rodas was Morales’ fourth secretary of social welfare since he took office in January 2016.

“It’s a lot of people with no experience put together with not enough money to do it,” Douris said.

This time around, though, Morales chose two Christian women with experience. Cándida Rabanales was the director of Save the Children, and spent the last 20 years working with Guatemalan children. Her second in command, Flory Herrera, has 27 years of experience working with orphanages in the family model. That’s the type of residential care that Douris recommends, where a few children live in a home with house parents. Many private Christian orphanages already operate under this model.

“She has practical experience, so the potential that some good things will come out of this is very high,” Douris said. “But the problems are so significant and deeply rooted that it is going to take a long time to be able to make the system work better.”

Besides competent people in the department of social welfare, Guatemala needs more options for its abandoned, abused, and neglected kids, Douris said. He’s looking for the church to be a major player in changing Guatemala’s stance toward vulnerable children.

“The government will never have enough money to address the need. So it has to be the private sector that gets involved, and the church is a big part of that,” he said. “I think significant progress has been made with churches becoming educated as to their role and what they can do to help.”

López is a big part of that. Her husband is an associate pastor at Fraternidad Cristiana, a church that sees about 15,000 visitors each weekend. She’s also a popular speaker in her own right.

In 2014, López and her husband adopted their first daughter. One year later, in one of her most popular blog posts ever, she announced they had adopted a second daughter.

“It sent shock waves” because she has two biological children, while Guatemalan couples only adopt if they can’t have their own children, she said. Even then, the process is kept quiet and the child adopted is nearly always an infant. When López introduced her second daughter to her neighbor, the woman “literally scratched her head.”

In 2009, just 253 orphans were placed with Guatemalan families. Two years earlier, Americans had adopted 4,726 Guatemalan children. Guatemala’s international adoption program had to be shut down in 2008 because children were being sold to or kidnapped for American couples. At one point, the nation made more money on its babies than on anything else—save bananas.

“We will be those people who get weird looks and who hear ‘and you what?’” López wrote. “Do not be frightened by us … I am not brave; I only know the Caller. There is no risk in obeying him. The biggest risk I see is to spend my life on things that do not glorify his name.”

Last year, López started a support group for adoptive families at her church; about 20 families come, though half are American missionaries. “I’ve seen a rise in adoption in our own church, slowly but surely,” she said. “We are starting to see people ask about it.”

She’s been on the radio and on television speaking about adoption. “It’s gone beyond our church, and we’re so thankful for that.”

But when a donor offered to run a huge advertising campaign encouraging adoption, López turned it down. The system can’t handle it yet. “If we had 100 families calling [the social welfare office to adopt], they’d be frustrated,” she said.

The country needs baby steps: Government employees who know about working with children. A functioning foster care system with support systems in place. Orphanages that look more like homes than warehouses. And support for families so they don’t have to give up their children in the first place. (UNICEF estimates that of the 132 million orphans in the world, only 10 percent have lost both parents. Guatemala is no exception.)

“We are praying that this whole crisis puts a greater spotlight on the reality,” López said. “I want adoption normalized, but we also recognize that the greatest need is not necessarily adoption but reunification, prevention, and mentorship, because a lot of the families don’t feel equipped or able to take care of their children. … I’d love the church to be a factor.”

“On March 8th, a fire was started at a government shelter that ended up taking the lives of 40 young girls and has come to dramatically impact the lives of thousands more,” wrote David McCormick, a Canadian missionary running a family-style orphanage in Guatemala.

“Guatemala has just exposed one of its darkest spots, and I pray that the light would shine not only as a fleeting flicker in response to the crisis, but as a lasting beam of life.”