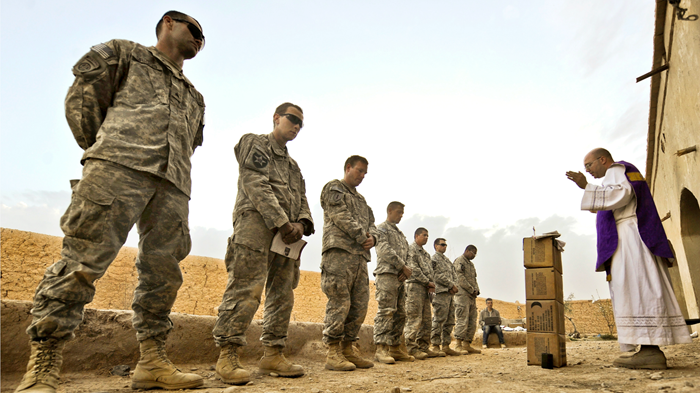 If you’re an evangelical entering America’s military—and about 4 out of 10 service members are—you’re going to have to get more specific than that.

The general categories of “Protestant, no denominational preference” and “Protestant, other churches” have been removed from the Department of Defense (DoD) list of recognized religions as the US military seeks out more detailed designations for its 1.3 million service members.

This spring, the DoD doubled the religious identities that military personnel can declare on official paperwork and dog tags. The list now totals 216 different affiliations [full list below].

About 150 of them are Protestant groups, with the Southern Baptist Convention (SBC) remaining the most popular individual denomination in the Armed Forces.

The military is also prompting the “nones” to narrow down their beliefs. The religiously unaffiliated are an increasingly significant demographic in the US military, making up between 20 percent to 25 percent of the force. As CT reported, the number of atheists in uniform surpassed the number of Southern Baptists in 2014.

The new list nixes not applicable and no religious preference—among one of the most popular affiliations among service members— and replaces them with a litany of designations. In addition to agnostic and atheist, soldiers can now mark no religion, no preference, none provided, humanist, or heathen.

The government even changed the name of this expanded list from the “Faith Group Code” to the “Faith and Belief Code.”

The Armed Forces Chaplains Board made these changes to better measure the religious makeup of the military and thereby provide more targeted spiritual support for them. “Just being on the list is a signal of inclusion,” said Kim P. Hansen, sociologist and author of Military Chaplains and Religious Diversity.

The ability to “select their precise religious affiliation” is one way the military can honor the needs and preferences of those who serve, according to Chaplain Robert Allman, a strategic communications officer for the US Army chief of chaplains.

Ordained in the Presbyterian Church of America—now one of 13 Presbyterian groups recognized by the military—Allman said soldiers will occasionally bring up his particular denomination or theological tradition if they happen to also be Presbyterian, but he ultimately serves a range of Christians as well as non-Christians and non-believers.

“We continue to focus on providing religious support to everyone,” he said. “In times of need, people come to see a chaplain.”

About 3,000 chaplains serve across the Armed Forces, and for years, their makeup has not mirrored the military’s overall religious demographics, nor America’s.

Though nondenominational Christians, nones, and Catholics are the most popular religious groups in the military, Southern Baptists have at least twice as many chaplains as any other faith, with non-SBC Baptists and Catholics behind them. The military has no chaplains who identify as atheist, agnostic, or humanist.

“Many families describe having a faith denomination that is not commonly represented in the chaplain’s personal faith,” said Corie Weathers, a licensed professional counselor and wife to an Army chaplain. Depending on their tradition, “denominational identifiers matter significantly to some more than others…. [M]any families are able to adapt to chaplains, including various gifting and/or leadership styles, as they cycle through chapel assignments.”

The Military Religious Freedom Foundation, a watchdog group that has been critical of evangelicals, hopes the new codes will lead to different faiths being represented among the Chaplain Corps. “It’s a matter of seeing what happens,” said Chris Rodda, its senior research director. “My initial reaction is this is a very positive thing.”

The religious complaints go both ways. Some accuse the military of forcing service members and students at military schools to participate in Christian programs. Others, like the Lutheran Church–Missouri Synod—now one of nine Lutheran designations—raise concerns about preserving their faith convictions in the “secularized military.”

Either way, “service members feel increasingly entitled to have their beliefs respected by those in positions of authority,” said Robert W. Tuttle, law and religion expert from George Washington University Law School.

Chaplains help coordinate religious accommodations (such as exceptions to the Army’s uniform policy that allow soldiers to don certain religious headwear); compliant meals; religious texts; church services; and, in the case of a casualty, respectful treatment of a service member’s body, according to his or her tradition. Typically, this involves saying prayers, anointing with oils, or performing last rites.

“If they can perform it, they do. If they cannot, they provide support by coordinating with another chaplain,” said Allman, who emphasized that no chaplain is asked to violate their tradition.

As the Army has grown more diverse—Sikhs were added to the list for the first time this year—the Chaplain Corps has had to expand its own religious literacy and understanding. It taps insight from “subject matter experts” in world religions to answer questions and advise.

Codifying religion into 216 categories reflects the inherent structure of the military. The DoD must try to fit the range of spiritual belief and practice into codes from A1 to ZZ. But standardization works better for some faiths than others.

With more structured traditions, chaplains can seek out certain religious texts or experts in the faith to advise on reasonable accommodations. But “what if you’re Wiccan?,” asked Hansen. “It’s very individualistic. What one Wiccan needs is not what the other needs. You could claim anything.”

In that sense, nondenominational Christians and religious nones share a predicament: trying to fit into the structure of the military.

“The Roman Catholic priests, they come out of a hierarchical organization, so they know how to maneuver in that,” said Hansen, referring to the chaplains. “If you’re from an independent Baptist church, you’re not used to having a boss above you. It can be a disadvantage.”