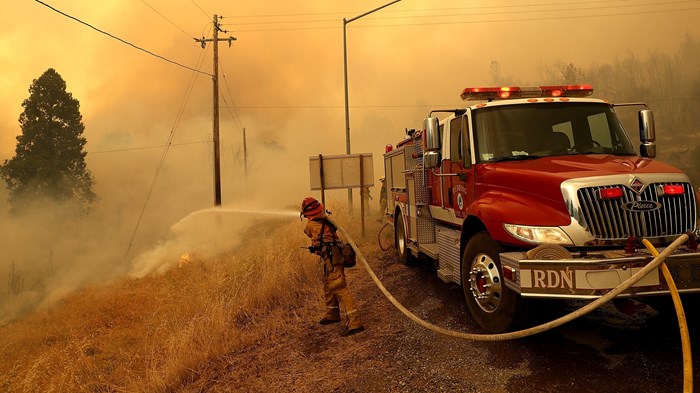 The main campus of Bethel Church, the nondenominational megachurch known for its charismatic practices and chart-topping worship ballads, has been spared threats by a wildfire raging in and around the congregation’s hometown of Redding, California. However, a different kind of firestorm—theological and social—has continued to stir online.

The Carr Fire, which began July 23 when a vehicle’s “mechanical issue” sparked the blaze in nearby Whiskeytown, had charred more than 131,000 acres and destroyed more than 1,000 residences by Friday morning, making it one of California’s top 10 destructive fires. More than 30,000 residents have been displaced and six people—including two firefighters, as well as two children and their great-grandmother—have been killed, the Sacramento Bee reported. At least a dozen others have been injured.

It didn’t take long for the maelstrom to make its way online, where Bethel supporters shared prayers and prophesies while the church’s critics pointed out what they view as overpromises of God’s favor. The digital discussion also rekindled a debate that may be a new normal for big-name churches in the face of disaster: How much help is enough?

One does not need to look far on social media or in more niche corners of the Christian blogosphere to see the flurries of judgment. But Bethel has held its theological ground, prophesying rain, commanding calm winds, and inviting divine intervention.

Competing narratives of God’s modus operandi and the power of faith increasingly cloud the digital air in times of intense heartbreak—a cautionary tale of how Christians of different strands respond to crises and to each other amid them.

Bethel has been at the heart of a charismatic boom in North America and around the world. Famous—and in some circles infamous—for its healing and prophetic ministries, and known in Sunday gatherings around the globe by its Bethel Music record label, the church has played an outsized role in the mass popularization of its charismatic brand of Christianity.

The church also finds itself the subject of regular criticism for its unabashed and sometimes controversial charismatic practices, as CT explored in a 2016 cover story.

In the wake of the Carr fire, the theology behind those practices has served to strengthen both adherents and opponents in their own convictions.

Last Saturday, with the blaze only a few miles away and the fire line extending to less than a mile from the Bethel campus, according to Dann Farrelly, associate pastor and dean of the Bethel School of Supernatural Ministry (BSSM), Bethel leaders and members sounded off a call for prayer for the church and the surrounding community.

“We’re inviting the global community to join us in praying for Redding, for Northern California, and for California overall,” church officials said.

Kris Vallotton, a senior church leader and cofounder of BSSM, tweeted, “Pray for us, we are in trouble here.”

While a number of other churches and schools in the area are serving as evacuation centers, such as Redding’s Cross Point Community Church and Shasta College, Bethel has come under criticism for not acting as a safe zone.

The critique may sound familiar, as “Christian Twitter” has been down this road before.

Last August, when Hurricane Harvey struck the Texas coast and flooded Houston, megachurch pastor Joel Osteen was lambasted by critics for initially not opening the doors of his Lakewood Church to flood victims. The facts on the ground, diluted as they were, did not prevent detractors from jumping to their own conclusions.

In another case of heart-rending catastrophe, Redeemer Presbyterian Church in New York City was flooded with pleas for assistance following both 9/11 and 2012’s Superstorm Sandy, though it was spared the looming hostility and shaming due to the preparations of “an organized diaconate with trained leaders.”

Related critiques have taunted or been levied against American churches and Christians across crises over the years. For instance, fierce, often ungracious debates over “thoughts and prayers” are now a predictable component of the aftermath of any mass shooting.

For Bethel’s part, staff said the church could not act as an evacuation zone because of its proximity to the blaze and because there is a single entry and exit point to the campus, which is itself surrounded by brush. The Red Cross said Bethel offered to be an evacuation site, but was turned down because of the campus’s nearness to the fire.

“We’re not able to be a place where we can house people right now,” Farrelly said via a video uploaded to Facebook last Friday.

“Due to our proximity to the fire and the limited accessibility of our College View campus, we are not a primary choice as an evacuation center,” Bethel said via an update last weekend. “We wanted to meet the need, but had to do it safely and with permission.”

The church has, however, flexed its considerable ministry muscle and financial resources, encouraging donations to aid relief efforts. Bethel is also partnering with the Red Cross and the Salvation Army in response to the Carr fire, Farrelly said.

“We’ve been sending our teams and people that are here that haven’t had to evacuate to lend a hand,” added Lauren Vallotton, Bethel’s director of operations, via the Facebook update. “We’re believing for a miracle.”

Last Sunday, Bethel was invited to become a distribution hub for the Salvation Army, and the church opened the doors of its College View campus on Monday. According to the Bethel weekend update, the church has also been asked to assist with “providing supplies and volunteers to distribute food at the Shasta College Evacuation Center, search and rescue efforts, and staying available to city officials and other agencies for any needs.”

In Redding, a city of about 90,000, the biggest church in town still stands; but some church members lost everything. “A lot of staff have been affected” by the incendiary mayhem too, said Eric Johnson, a Bethel senior pastor.

“This is when we turn our anxiety into prayer,” said Farrelly, who, as the fire approached last weekend, described the scene around Bethel as “tense” and “apocalyptic-looking.” “And this is when we can either meditate on the things of the Lord, or you can worry.”

The church’s evening service last Friday and Saturday morning “healing room” were canceled. A Bethel TV email update announced that no weekend services would be streamed due to internet outages and evacuations, though it expressed hope to be back online this weekend.

Firefighters worked hard to establish containment lines to protect more of Redding from succumbing to the blaze. With thousands of homes and businesses destroyed, and about 1,400 more threatened, authorities reported Friday morning that 39 percent of the fire was contained.

More than 4,300 firefighters and 380 fire engines are battling the blaze and the governor of California, Jerry Brown, issued a state of emergency as the wildfire threatened critical infrastructure in Shasta County, where Bethel is located.

Bethel leadership have expressed appreciation to first responders and journalists covering the disaster. They have also repeatedly highlighted needs and prayers specific to the community.

“There are confounding miracles happening and we need more,” said Bethel Music worship leader, Kalley Heiligenthal, via Instagram. “What I know is the goodness of God billows faster and brighter than any fire ever could,” she said in a separate post.

“We do the best we can and then we ask the Lord to step in and do his miraculous, amazing things,” said Farrelly.

California pastor and friend of Bethel, Shawn Bolz, wrote for Charisma News last Friday: “I believe what God will do in Redding shortly after this terrible week will be historic for the church at large and will help to bring about a window of evangelism and ingenuity to the church that will come across media, both Christian and secular: Breakthrough is imminent!”

Following the outcry against Osteen in the aftermath of Hurricane Harvey’s flooding of Houston, Billy Graham Center director Ed Stetzer weighed in on his CT blog on such debates among the faithful after disaster strikes. The media deluge against a pastor and church of a differing persuasion, in that case Osteen, in such fuzzy and tragic circumstances, “tells me we have a cultural problem,” he wrote. “The fact that many Christians have joined in shows me it is a Christian problem.”

In the post entitled “Some Christians Hate Joel Osteen More Than They Love the Truth,” Stetzer wrote, “I’d expect that from the world, but I hoped for better in the church. … The irony for some in this moment is clear: they hate Osteen because they believe he distorts the truth—and then they do the same when they critique him with false information.”

It seems that the brother of Jesus had something to say about being quick to listen and slow to speak and slow to get enraged.

Stop the selective listening. Let’s face it. Many already hate Osteen, so they are hungry for a scandal. Here’s the tough question: Are we hungry for a strategic or moral failure at Lakewood, too? As I mentioned above, I have serious thoughts about Osteen’s theology. But I need not plug my ears so that I can’t hear what is true.

Speak without the rage. Some take to Twitter like a death metal band. The screaming squeezes the logic out of our comments. When we dial back the emotion we are also more likely to retract when we have been wrong.

Tweet your retractions too. If we can learn anything from piling on at this time, it may be that saying sorry is something that Christians should do well.

Be silent. I waited to spill some ink on this topic. I had one thought at first. And another thought as the facts came out. What if I had piled on at the beginning? Or defended their decision too quickly? It has been best to be silent until there is something to say. And perhaps the best is to simply pull the plug.

He concluded: “Let’s save our energies for praying and supporting relief efforts.”