The Chicago musician begins his first sabbatical with a famous 80-year-old devotional.
Kate Shellnutt|December 11, 2018 07:00 AM 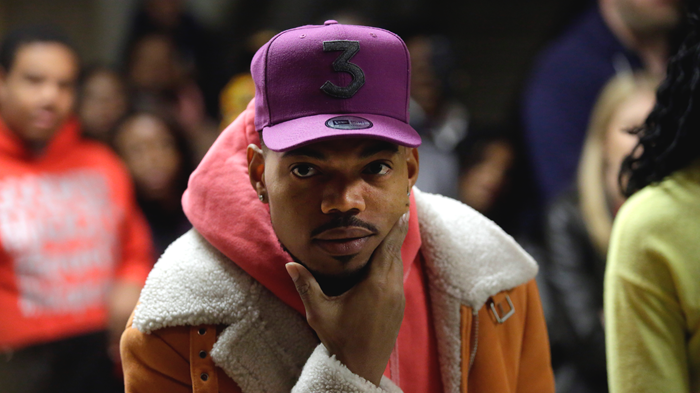 After years of referencing his Christian faith on social media and in his Grammy-winning hip hop albums, Chance the Rapper has set out on a sabbatical to study and meditate on God’s Word.

He shared a glimpse of his morning devotions—a page from Scottish theologian John Baillie’s A Diary of Private Prayer—with 9.2 million followers on Instagram on Monday.

The 25-year-old rapper posted a picture of the second day of the devotional, a prayer entitled “Continued Dependence Upon You” [full text below].

A Diary of Private Prayer reflects the personal religious practices developed by Baillie—a longtime seminary professor and church leader in Edinburgh in the mid-20th century. He and his brother Donald were considered among the greatest mediating theologians of their day. The book has sold more than a million copies in 20 languages since it was released in 1937.

Chance’s venture into Baillie’s best-known work comes a few days after the musician told fans he’d be traveling out of the country on his “first sabbatical” and would be dedicating the time away to studying Scripture.

“I’m going away to learn the Word of God which I am admittedly very unfamiliar with. I’ve been brought up by my family to know Christ but I haven’t taken it upon myself to really just take a couple days and read my Bible,” he stated.

“We all quote scripture and tell each other what God likes and doesn’t like but how much time do we spend as followers of Jesus to really just read and KNOW his Word. I’m definitely guilty of not devoting time to it.”

Over the weekend, he also posted on his Instagram stories a picture of the cover of Tim Keller’s Romans 1-7 For You, which he was reading on the beach. Chance said he hopes to read five or more books of the Bible during the sabbatical (and also finally quit smoking).

The announcement accompanied a clip of him and his nephew, who was partly his inspiration for the time of study. “He’s the first boy of the next line and he needs his uncle to be educated,” Chance wrote. He also posted a picture of his 3-year-old daughter Kensli walking toward a church with a caption from Proverbs 22:6, “Train up a child in the way she should go….”

Even before this trip, the popular rapper had not been shy about his faith. His 2016 album Coloring Book—which CT reviewed as being “all about the love of God”— featured gospel artists like Kirk Franklin and lines from Chris Tomlin’s “How Great is Our God.”

Earlier this year, Chance self-identified as a Christian rapper, spouting the lyrics, “Watch how I move, different chapters, decisions, missions, visit pastors … Everybody finally can say it out loud; your favorite rapper’s a Christian rapper, and I got faith and my faith in my soul.”

Christian fans have largely embraced his references to God in his music—as well as the millions donated to schools and services in his hometown. But some remain concerned about Chance’s Christian walk and whether the content of his music should adjust as he grows in Christ. (Even his sabbatical announcement included a profanity.)

“For the last few years, we’ve covered Chance the Rapper with bated breath,” wrote the Christian hip hop news site Rapzilla. “We’ve seen him toe the line between making impactful gospel-infused rap, and then follow up with sexual/drug laden raps. It’s frustrating to watch, but at the same time a bit endearing in the sense that Chance is ALWAYS proclaiming his love for Christ, but like many of us, falls short.”

The site shared the news of his recent sabbatical, asking readers, “Pray that he comes back renewed and closer to God. Pray that he is operating correctly in his calling and that he continues to use his platform for good.”

Chance is armed with an acclaimed devotional guide for his sabbatical; CT Pastors listed A Diary of Private Prayer among its top books on deep prayer in 1998. Publisher Simon and Schuster describes it as a collection of personal prayers “for people who are seeking a better understanding of God and themselves.”

O God my Creator and Redeemer, I may not go forth today except You accompany me with Your blessing. Let not the vigor and freshness of the morning, or the glow of good health, or the present prosperity of my undertakings, deceive me into a false reliance upon my own strength. All these good gifts have come to me from You. They were Yours to give and they are Yours also to curtail. They are not mine to keep; I do but hold them in trust; and only in continued dependence upon You, the Giver, can they be worthily enjoyed.

Let me then put back into Your hand all that You have given me, rededicating to Your service all the powers of my mind and body, all my worldly goods, all my influence with others. All these, O Father, are Yours to use as You will. All these are Yours, O Christ. All these are Yours, O Holy Spirit. Speak in my words today, think in my thoughts, and work in all my deeds. And seeing that it is Your gracious will to make use even of such weak human instruments in the fulfillment of Your mighty purpose for the world, let my life today be the channel through which some little portion of Your divine love and pity may reach the lives that are nearest to my own.

In Your solemn presence, O God, I remember all my friends and neighbors, my fellow townsfolk, and especially the poor within our gates, beseeching You that You would give me grace, so far as in me lies, to serve them in Your name.

O blessed Jesus, you used your own life for the redemption of your human brothers and sisters. You have no thought to your comfort or earthy gain, but you filled up your hours and days with deeds of self-less love. Give me grace today to follow the road that you walked; and to your name be all the glory and the praise, even to the end. Amen..

Chance the Rapper Shares a ‘Private Prayer’ from ...