Israeli policy holds up Christmas travel plans for believers in the Palestinian strip.
Jayson Casper|December 20, 2018 08:00 AM 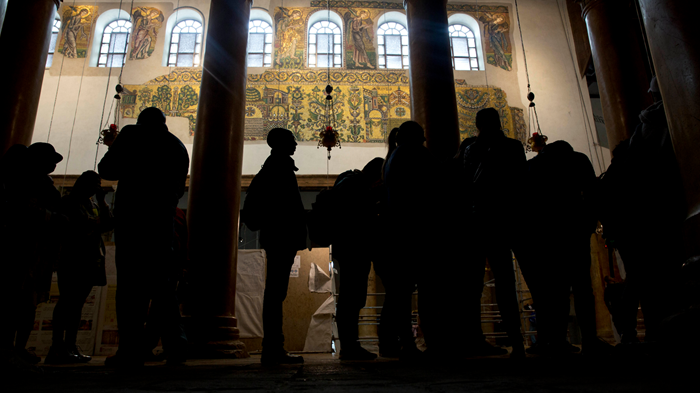 Bethlehem’s Church of the Nativity has restored its sparkling mosaics and marble columns to their original glory for the first time in 600 years.

“It has become such a beautiful church,” Ziad al-Bandak, head of the local project committee of Christian leaders, told the AP. “Every Christian in the world would love to see it now.”

Palestinian Mayor Anton Salman expects 1.2 million tourists will make their way to Christ’s birthplace this year. Among them, following an Israeli reversal, will be those who most long to visit for Christmas—the Christians of the Gaza Strip.

“In Gaza, they talk about the West Bank as if it is heaven,” said Hanna Maher, Egyptian pastor of the Gaza Baptist Church. “People love to go for Christmas; there are so many churches.”

Last week the Christian advocacy group Middle East Concern (MEC) reported that nearly all who applied to enter Israel to visit the West Bank for Christmas failed to receive permits, except for those older than 55.

Applicants younger than 16 were also approved, consistent with restrictions instituted last Christmas and maintained through Easter. A previous policy limited travel to those between ages 16 and 35.

The MEC report was confirmed by Maher, who stated that initially just 200 travel permits had been granted, and Christians, sharing stories of the delayed permit applications, began to assume those outside the age limit would not be allowed to travel.

But their prayers were answered this week when hundreds more approvals were granted, The new batch brings the total for Gaza’s Christians up to 650, reported TV7, with an additional 100 applicants in process. Maher confirmed this latest list included many youth. Another round of approvals is expected to release on Christmas Eve.

“The ones who get permission are happy,” he said. “The others not.”

In previous years, when Christians were able to travel to the West Bank without restrictions, the churches in Gaza would be empty for Christmas, said Hanna Massad, founder of Christian Mission to Gaza. He served as pastor of the Gaza Baptist Church from 1987–91 and 1999–2008 and returns regularly.

Maher’s own three young children were approved but not his Palestinian wife. As an Egyptian, he does not qualify within the holiday policy.

Still, some families were granted permission to travel together, and he has little explanation. “Maybe they do it to make it look like there are many permits, even if many will not go,” Maher said. “Families cannot travel if separated.”

But there were exceptions to the unstated over-55 rule. The first batch included a young woman set to marry in the West Bank over Christmas and remain there after the wedding, while her parents will return home.

“They felt it was a miracle,” Maher said. “Most families have relatives in the West Bank but cannot visit them.”

For Israel, returning is the issue. “Foreigners have no inherent right to enter Israel, including Palestinian residents of Gaza,” stated a document issued by the Israeli Coordinator of Government Activities in the Territories, in reference to similar restrictions last Easter.

The decision was made, it said, cited by Israeli newspaper Haaretz, “in light of the recurring phenomenon of Palestinians who took advantage of the permit to remain in Israel illegally” and “to limit illegal presence in Israel.”

A few dozen remained in the West Bank the previous Christmas, their sources said.

Israel calls the West Bank by the biblical names “Judea and Samaria,” though it has not formally annexed the territory considered occupied by the international community.

Poor living conditions due to the Israeli blockade, coupled with the increasing Islamization of culture under Hamas, pushed some Gazan Christians with holiday permits to stay in the West Bank, according to Massad, who recently wrote Pastor from Gaza about his experience.

“Christians feel under more and more pressure,” he said. “But the West Bank is Palestinian territory. They are not moving to Tel Aviv.”

But if they can find a way, they are headed out. There were 3,000 Christians in Gaza prior to the blockade, instituted 11 years ago.

Maher, who became pastor in 2012, said a West Bank woman married a man from Gaza in his church and circumvented the system by going out through Egypt, traveling to Jordan, and crossing the river back to the West Bank. After seven years of not being able to leave Gaza, now the family stays put in the West Bank, afraid even to leave the village. (If her husband tries to cross a checkpoint his ID will link him to Gaza, and he will be sent back home.)

“From one prison to another,” Maher quoted him, “though one prison is much better than the other.”

CT reported on life in Gaza in May, as demonstrations drew tens of thousands to the border. With 2 million people living in a strip of land the size of Philadelphia, Gaza’s unemployment rate is 44 percent, and the poverty rate at 39 percent, both double that of the West Bank. Eighty percent live on some sort of social assistance, according to the World Bank.

So while $14 million has been poured into the Church of the Nativity restorations—deemed a World Heritage Site in 2013—Gaza’s Christians at least will not miss the ceremonies.

Bethlehem will host a delegation from 14 twin cities around the world for the Christmas tree lighting celebration. Foreign musicians will perform, and visiting hours will be extended to accommodate the long lines.

Mayor Salman said he hopes the increased tourism will encourage the dwindling Palestinian Christian population not to emigrate.

But in Gaza, the few left have little choice. “In the West Bank you can feel the Christmas spirit on the streets,” Maher said, “in Gaza, we only feel it in our homes.”