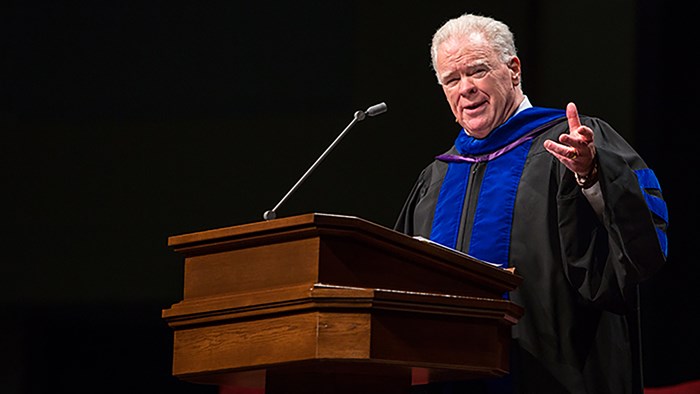 He clarified. He defended. He apologized. And now, after weeks of controversy, Southern Baptist icon Paige Patterson is no longer president of Southwestern Baptist Theological Seminary (SWBTS).

After deliberation that went on past 3 a.m., the board voted him into paid retirement, complete with an on-campus home where he and his wife can live as theologians-in-residence.

“After much prayer and a more than 13-hour discussion regarding challenges facing the Institution, including those of enrollment, financial, leadership and institutional identity, the Board determined to move in the direction of new leadership for the benefit of the future mission of the seminary,” they said in a statement.

Patterson becomes the second president in SWBTS history to be forced out of the role. The only other was Russell H. Dilday, who was dismissed in 1994 as part of the Conservative Resurgence, the wave of denominational leadership changes orchestrated by Patterson himself.

Decades after his rise within the SBC, the 75-year-old recently ended up in the center of #MeToo-era criticism targeting his approach to abuse, divorce, and women, which led to bigger questions over his efficacy at the helm of its second-largest seminary.

The board affirmed that Patterson had ultimately complied with reporting laws on assault and abuse. The outgoing president spent a few hours meeting with the trustees and with his own leadership cabinet during the long, contentious session at the school’s Fort Worth, Texas, campus. His wife, Dorothy, was also in attendance.

At the extended board meeting, trustees also sided with Nathan Montgomery, the SWBTS student who was fired after tweeting a blog post suggesting Patterson step down. (The post had been written by Ed Stetzer, executive director of the Billy Graham Center at Wheaton College, on his CT blog.) The board found “no evidence of misconduct” in his employment file.

In addition to the controversial remarks, Patterson had faced scrutiny for declining full-time enrollment and finances at Southwestern, which exceeded its budget last school year, despite cutting staff.

In an email to the SWBTS community this morning, Patterson and his wife said they were, “of course, hurt” by the trustees’ actions. “But we did not compromise and we still have our voice to witness,” the Pattersons said. “That we will attempt to faithfully do.”

Over the past few weeks, the backlash led to several petitions rallying for and against Patterson. Fellow Southern Baptists on both sides had looked to the SWBTS board of trustees (a group of 40 denominational leaders appointed by delegates at the SBC’s annual meeting) to respond—with critics and supporters alike believing the outcome of today’s meeting would stand to have a broader impact on their denomination as a whole.

The SBC pastor network Baptist21 called the Patterson conflict “almost non-ignorable,” noting that it had forced even typically middle-of-the-road Southern Baptists to speak out.

For the thousands of Southern Baptist women who led a charge to expel Patterson from SWBTS and condemn his “unbiblical” views of gender and leadership, any action taken against the SBC figurehead signals greater attention to women’s roles and women’s voices in their movement.

“This strong leadership on the part of the SWBTS board is a welcome relief,” said Karen Swallow Prior, a Liberty University professor and one of the initial signatories on the Southern Baptist women’s open letter calling for his removal. “The board’s decision is both substantive and symbolic. By the grace of God, history will look back at the leadership of these men and women as a starting point for the corporate repentance that is needed to heal the wounded women in our midst.”

On the other hand, Patterson’s defenders view any punishment as unnecessarily caving to outside pressure and chatter.

“If there is any disrespect or dishonor that is turned toward Paige Patterson by the Southwestern Seminary board, it will cause a deep, grievous wound in the Southern Baptist body that I'm fearful will take a long time, if ever, to heal,” wrote Richard Land, Southern Evangelical Seminary president, former head of the SBC Ethics and Religious Liberty Commission, and one of Patterson’s closest allies, in a recent letter.

The announcement regarding Patterson’s departure came the morning after The Washington Post reported further allegations against him. A former student claims that while he was president of Southeastern Baptist Theological Seminary (SEBTS)—his previous role— Patterson discouraged her from reporting an incident of rape to police and asked that she instead forgive the perpetrator.

Leading up to today’s meeting, several denominational heavyweights came short of explicitly calling for his removal, but still voiced concerns.

SBC president Steve Gaines stated he disagreed with Patterson’s counsel and called his remarks “improper.” He apologized on behalf of the convention, but added he does not have the authority to hold Patterson accountable—that was up to the trustees and convention delegation, who will have the opportunity to vote him off the preaching schedule at next month’s annual meeting.

The Patterson saga, which made national headlines starting in late April, comes after several years of public disagreements within the country’s largest Protestant denomination. Leaders have taken sides on issues involving race, national politics, and the rising influence of Calvinist leaders.

Patterson’s backers initially commended his May 10 statement and urged the denomination to accept his apology and move toward unity. Former SBC presidents Ronnie Floyd and Johnny Hunt thanked him for the statement, as did SEBTS president Danny Akin and GuideStone president O. S. Hawkins.

Those most frustrated by Patterson’s dismissal have blamed “social media lynching” and “political correctness” for the scrutiny over his past comments.

“Because Dr. Patterson has not said some things exactly right in our extra sensitive climate, he is being condemned by his enemies,” wrote one SWBTS alumnus in the Fort Worth Star-Telegram. “Who of us could withstand withering criticism and publicity of any misstatements we have made over the last several decades? Who of us could withstand having our statements taken in the absolutely worst light?”

The comments and allegations that have come up over the past month are not the only divisive ones in Patterson’s history, but given his stature, he didn’t face significant pushback before, wrote Stetzer on his CT blog three weeks ago, praising Patterson’s legacy while calling for him to resign.

On Wednesday, Southern Baptist Theological Seminary President Albert Mohler wrote that the judgment and public humilation his denomination had faced over Patterson was just the beginning.

“This is just a foretaste of the wrath of God poured out,” Mohler wrote on his blog. “This moment requires the very best of us. The Southern Baptist Convention is on trial and our public credibility is at stake. May God have mercy on us all.”

For Southern Baptists, the conversation isn’t over. Leaders are calling men and women into deeper discussion over the issues at play in the Patterson controversy, which is bound to come up at the annual meeting in June and beyond.

“For our convention as a whole there is much work to do, and much damage to repair, reaching far beyond this situation. But, given where we are now, that needs to be done without Paige Patterson,” said Stetzer in a blog post today, where he stated that Patterson should not to speak at the upcoming meeting.

J. D. Greear, a candidate for SBC president who was mentored by Patterson, wrote this morning that the situation was “heartbreaking,” but that he was grateful for the response and accountability from the seminary trustees.

“As go our seminaries, so go our churches. It’s past time for a full re-evaluation of existing power structures, and for the strategic implementation of formal channels of influence/input/leadership for women in the SBC,” tweeted Jen Wilkin, an author and Bible teacher.

Nathan Akin, an SBC pastor and founder of Baptist21, wrote, “This is not the time for like-minded brothers to pull back from being involved in SBC processes. It is more than ever a call for you to be involved! #SBC18”