Tim Keller, John Piper, and Andy Stanley Among the 12 ‘Most Effective’ Preachers 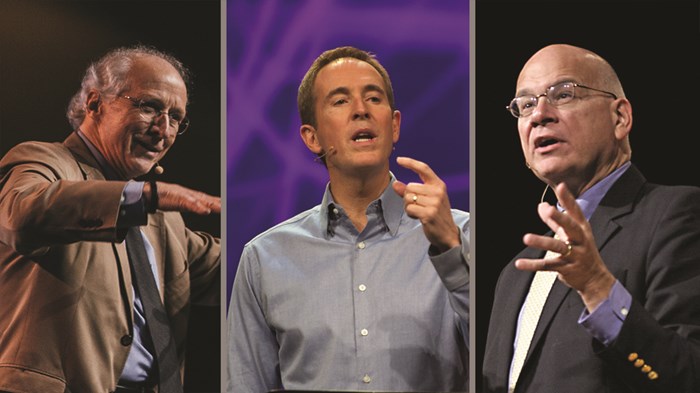 Even as many churches push for innovation, nothing can replace the power of a well-preached, gospel-centered message. Gallup has found that effective sermons still remain the biggest factor drawing Americans to church each Sunday.

This week, Baylor University’s Truett Theological Seminary released its 2018 ranking of the ministers who set the standard for contemporary sermons. It lists a cross-denominational mix of evangelical heavyweights ranging from Reformed leaders such as John Piper and Tim Keller, to classic preachers such as Chuck Swindoll and the late Haddon Robinson, to fresher voices such as Andy Stanley and Ralph Douglas West.

The 12 picks represent “the most effective preachers in the English-speaking world” (though all are based in the US), according to Truett’s survey of almost 180 sermon experts belonging to the Evangelical Homiletics Society and the Academy of Homiletics.

The top preachers, in alphabetical order, are:

• Alistair Begg, senior pastor at Parkside Church outside Cleveland. The author of Preaching for God’s Glory and the editor of the Spurgeon Study Bible, the Scotland-born preacher broadcasts his sermons through his Truth for Life radio ministry and serves on the council for the Alliance of Confessing Evangelicals.

• Tony Evans, founder and senior pastor of Oak Cliff Bible Fellowship in Dallas. As the first African American to earn a doctorate in theology from Dallas Theological Seminary, Evans has written and preached on the Cross as a remedy to racism. In 2009, he released a book dedicated to his favorite stories, quotes, and anecdotes from sermons; CT’s Preaching Today has featured a message he preached on finding joy in our differences.

• Joel C. Gregory, endowed chair in preaching and evangelism at the George W. Truett Theological Seminary of Baylor University in Waco, Texas. Gregory—a contributor to Preaching Today—recently celebrated 50 years of preaching around the world, and through his ministry, he taught 170 times in 32 churches and 20 conferences last year alone.

• Tim Keller, founding pastor of Redeemer Presbyterian Church in New York. Keller, who stepped down from weekly preaching at Redeemer last year, wrote in his 2015 book Preaching that “expository preaching should provide the main diet of preaching for a Christian community.”

• Thomas G. Long, professor emeritus of preaching at Emory University’s Candler School of Theology in Atlanta. Long described his preaching process in a 1991 CT Pastors interview, urging pastors to stick to “one-point sermons” and admitting his own critical eye towards his preaching: “I think serious preachers, preachers who give themselves to this task, need to learn how to forgive themselves for not producing masterpieces every week.”

• Otis Moss III, senior pastor of Trinity United Church of Christ in Chicago. Ordained in the Progressive National Baptist Convention and the United Church of Christ, the late-40s activist and preacher is the youngest on the list. Moss’s congregation is best known as the church where President Barack Obama came to Christ.

• John Piper, longtime pastor of Bethlehem Baptist Church in Minneapolis and founder of Desiring God. Piper is credited with popularizing Reformed theology among a younger generation, many of whom were drawn to him after his epically popular “Don’t Waste Your Life” sermon at the 2000 Passion conference. In 2010, a LifeWay Research survey of Protestant pastors ranked him among the top 10 most influential living preachers. He’s now the chancellor of Bethlehem College and Seminary in Minneapolis.

• Haddon Robinson, former president and professor of preaching at Gordon-Conwell Theological Seminary in Boston. Robinson’s book Biblical Preaching is a go-to text for seminaries and Bible colleges. He died last year at 86 and is remembered as an unmatched champion of expository preaching.

• Andy Stanley, founding pastor of North Point Community Church and North Point Ministries near Atlanta. The megachurch pastor has often described how he shapes his preaching to resonate with unchurched and unbelieving listeners as well, down to replacing common phrases like “The Bible says” with more specific setups. He is the son of In Touch Ministries founder Charles Stanley; both father and son made LifeWay’s top 10 list.

• Charles Swindoll, senior pastor at Stonebriar Community Church in Frisco, Texas. In addition to his radio ministry, Swindoll has pastored congregations since 1963 and has stated he has no plans to retire. Back in 2002, readers of Leadership Journalnamed Swindoll the country’s most effective preacher, and LifeWay’s 2010 survey found his influence second only to Billy Graham’s.

• Barbara Brown Taylor, former Episcopal priest, professor, author, and theologian. She has served on the faculties of Columbia Theological Seminary, Emory's Candler School of Theology, and Mercer University's McAfee School of Theology. Taylor wrote for CT Pastors on “preaching the terrors” and ventured into “unconventional spirituality” with more recent books like An Altar in the World. She also made LifeWay’s top 10 list.

• Ralph Douglas West, founder and senior pastor of The Church Without Walls in Houston. A multisite megachurch pastor and adjunct professor of preaching at Truett, West has reflected on Martin Luther King Jr. as a preacher, and a sermon of his on Christian maturity was featured in Preaching Today.

A third of the preachers listed—Long, Robinson, Swindoll, and Taylor—also appeared on Baylor’s previous most-effective preachers list, which came out more than 20 years ago. The 1996 list included, of course, Graham; in tribute of the legendary evangelist, CT recently examined why his preaching worked.

“Some things are timeless in preaching,” like biblical teaching, the need for careful exegesis, and the awareness of context, said W. Hulitt Gloer, director of Truett’s Kyle Lake Center for Effective Preaching which conducted the survey. “The shape of the sermon may change, but the message remains the same.”

Gloer told CT that styles vary widely among the popular preachers, right down to which still stand behind a pulpit with their notes and which pace the stage with cordless mics and video illustrations.

Survey respondents were asked to assess preachers based on seven criteria: biblical/exegetical quality, relevance, personal character, theology, sermon form, effective communication, and delivery. The 12 on the list were the top-rated among 1,000 nominees.

“To meet the demands before us, we will need the same biblical, exegetical, and theological proficiency that we have always needed in the past, but we will also need more improvisational, cultural, and intercultural proficiency than we have right now,” said Jared E. Alcántara, assistant professor of homiletics at Trinity Evangelical Divinity School.

“This historical moment forces us to learn how to preach timeless truths in timely ways before diverse communities.”

A quarter of the pastors on the list—Evans, Moss, and West—are African American. CNN’s John Blake described their style in relationship to the black church tradition:

Moss’ approach to preaching is steeped in what he calls the “blue note gospel,” a message shaped by the fiery prophetic tradition of the black church. He’ll quote Gaynor’s disco anthem, a passage by author Flannery O’Connor and the Book of Isaiah all in one sermon. West’s powerful delivery embodies the “start slow, rise higher, strike fire and retire” approach of the black church as well.

Gloer emphasized the importance of exposing seminary students to a range of preaching styles for inspiration and example. The broad list demonstrates that there’s no single way to preach effectively, and that God speaks through many voices and approaches. “Each student must find their own voice,” he said.

But today’s top preachers also convey a degree of clout and celebrity, and aspiring pastors and churchgoers alike can be drawn to a particular teacher’s offerings—which are more widely accessible than ever thanks to streaming video and sermon podcasts. (It’s no coincidence that Stanley, Swindoll, Piper, Keller, and Begg all appear among the top 15 most popular Christian podcasts on iTunes.)

As CT has noted, the Internet, particularly social media, has also upped the pressure for preachers to address current events and navigate political issues in their sermons.

But ultimately, the most effective preachers have an even higher calling.

“In a world where talk is cheap and there seems to be no end to it, the preacher has to recover the priority and power of the word,” Gloer said in a press release.

“The Hebrew understanding of words is that they both say something and do something. They have the power to bless and to curse, to wound and to heal, to build and to destroy. In fact, the worldview you function with is predicated on the words you know. Words are the tools of the preacher and that gives them incredible power.”

Tim Keller, John Piper, and Andy Stanley Among the 12 ‘Most Effective’ Preachers

Tim Keller, John Piper, and Andy Stanley Among the ...