Indonesian Churches Pray for Thousands Dead and Missing After Tsunami 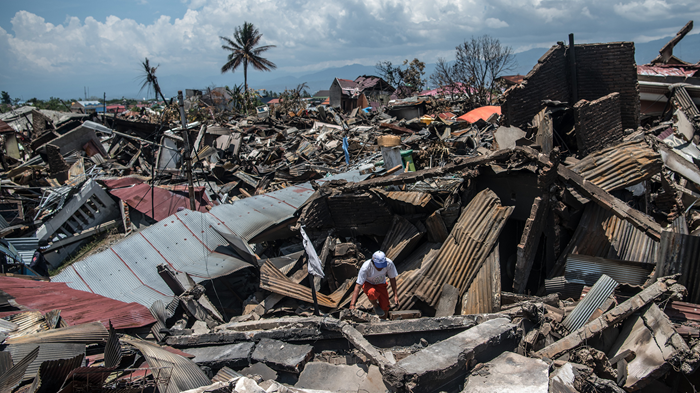 The congregation praised God for keeping their building standing and prayed for the two dead and two missing from their body.

“We pray for our town, and we pray for our leaders,” a lay leader named Bernard told CT. “We pray and praise and worship. We [are] always in the presence of God.”

While dozens churches in Palu held services over the weekend for the first time since the disaster, many Christian villagers outside of the capital city have no building to return to.

“I’m here at this particular church because my own church is no more; it’s leveled, and on its location there’s a corn plant,” Min Kapala, a worshiper who traveled to the city from the outskirts, said in The Washington Post. “That was very strange to me.”

The Bible camp in Sigi, where hundreds of students were killed and buried in mudslide rubble, has slid nearly a kilometer from its original site, according to leaders from the Indonesian Protestant Church in Donggala (GPID)—the biggest denomination in the Central Sulawesi province and the one that experienced the greatest loss in the disaster. 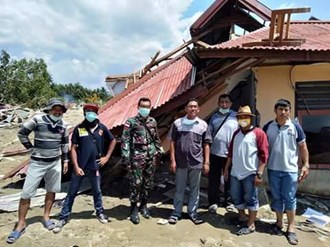 Because of severe damage to roads and buildings in remote areas, it has taken days for GPID officials and aid workers to reach the farthest-flung of the 100 churches across the province.

Ministry leaders are taking it one devastating day at a time.

Each evening they circulate an update counting the days since the September 28 earthquake and tsunami shook their island—now up to number 10—and the grim statistics: 1,600 dead, 2,600 injured, and unknown numbers buried, with 66,000 homes and 2,700 schools destroyed. Later this week, Indonesia’s National Disaster Management Agency will end their searches and consider certain areas of Palu as mass graves for the dead.

But there are also more hopeful figures, thanks to the aid coordinated by the Christian minority in Central Sulawesi and West Sulawesi provinces. The Indonesian Council of Churches (PGI) and the Network of Christian Communities for Resilient Community Disasters in Indonesia (TBI Jakomkris) report that ministries are bussing in necessities, hundreds of kilos at a time, items ranging from ramen noodles to Pampers. 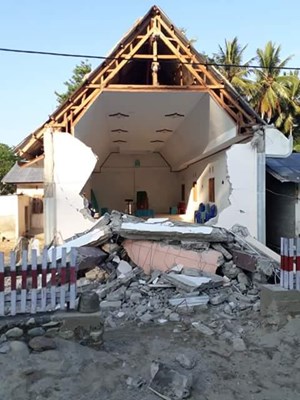 A Christian response team from the YAKKUM Emergency Unit (YEU) treated 40 patients at the Great Mosque of Palu and set up clinics at several local churches serving as evacuation sites.

Relief workers in the network are arranging trips to markets and gas stations that are finally reopening; setting up field hospitals for emergency surgeries; and offering counseling for children in villages through World Vision International, which has also amassed thousands of blankets and tarps to distribute.

Yance Darmawan, a GPID pastor and board member, has been organizing relief efforts from Palu. Teams have been held up by downed trees, cracked roads, and steep mudslides. Churches near the Bible camp mudslide have also been ruined. GPID Balanggu Church in Gumbasa, Sigi, lost the front of its building.

Despite talks of coming together with their Muslim neighbors for an interfaith prayer gathering, nothing has been scheduled yet, the Post reported.

In the Central Sulawesi province, Protestants make up 17 percent of the population and represent the largest religious minority.

Update (Oct. 4): When a massive earthquake and tsunami hit the Indonesian island of Sulawesi last Friday, residents were preparing for an annual weekend festival that draws a half-million tourists to the coast of Palu. But instead of enjoying cultural rituals, traditional music, and a paragliding competition along the beach, Christian leaders in Central Sulawesi province were suddenly coordinating relief efforts for the tens of thousands of people displaced by the disaster.

Their churches, mostly shaken but still standing after the 7.4 magnitude quake, became places of refuge for their congregations as well as their Muslim neighbors. (Indonesia is the world’s most populous Muslim nation, and only about 1 in 6 residents in Central Sulawesi are Christian.)

Three local Protestant leaders reported to CT that 86 church buildings in Palu have been established as aid centers for victims across the province.

“Even so, the refugees who came to take refuge there were also Muslims. They blend in supporting each other both [materially and psychologically],” wrote Yuberlian Padele, rector of Tentena Theological Seminary and former general chairperson of the Central Sulawesi Christian Church (GKST); Ika Kulas, pastor of the Central Sulawesi Christian Church in Tentena; and Set Tolage, another Tentena pastor.

“The church yard is a safe haven [for] thousands of people who are still hoping for help,” they said.

CT previously reported (below) on a few churches that had opened up as health centers and kitchens in the wake of the disaster.

Denominational leaders are still taking in the extent of the damage, studying satellite images showing where roofs collapsed, highways fell onto buildings, and whole villages appear to have sunk into the ground.

The Indonesian Red Cross already disclosed one of the most tragic stories of rescue from the resulting mudslide, the church building in the outskirts of Palu where they recovered 34 bodies of students missing from a Bible camp.

Local leaders said that the death toll from this location is now assumed to be well over 200:

The education and training center (Pusdiklat) from the synod of the Donggala Protestant Churches (GPID) was swallowed up by the mud, and the building disappeared altogether. At the time of the incident at Pusdiklat, the Bible camp was being held from one of the high senior schools. Participants … amounted to 240 people excluding teachers who were with them. Only 23 students survived. The rest are buried alive in seconds. This area is one of the worst areas of destruction.

The overall death toll in Central Sulawesi has now reached 1,400.

The pastors asked for fellow believers to pray for strength for their communities to endure in the midst of trauma and loss and to find access to resources. They said residents are left desperate for basic necessities like food, water, and gas while their city has been overrun with violent looters and price-gouging.

Even though the majority of church buildings in Palu suffered minor damage, Christians are afraid that they are too unstable to withstand further activity, mudslides, and aftershocks, the pastors said. 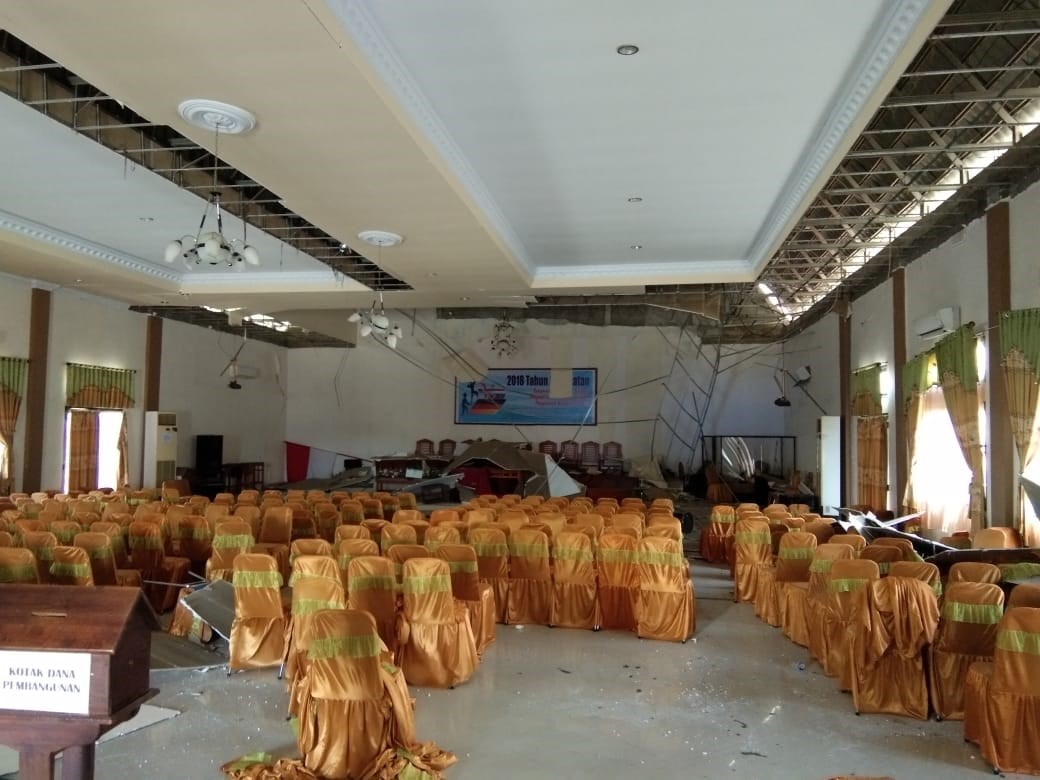 Original post (Oct. 2): Days after a 7.5-magnitude earthquake and resulting tsunami leveled homes, businesses, mosques, and churches on the Indonesian island of Sulawesi, Christians are reeling from the destruction as casualties climb into the thousands—which now include dozens of youth killed at a Bible camp.

Under the rubble of one church destroyed in a mudslide, the Indonesian Red Cross this week discovered the bodies of 34 kids who were attending Pusdiklat GPID Patmos “Jono Oge,” a church training center in Sigi, located outside the provincial capital of Palu.

Another 52 students remain missing from the camp, which regularly hosts youth for worship, teaching, and fellowship. Recovery efforts have been slower in hard-to-reach areas, which lack the equipment to move fallen concrete or dig through the carnage. A Red Cross spokeswoman said she expects the number of dead at Jono Oge to rise as the recovery continues.

The center is affiliated with Palu’s largest denomination, the Indonesian Protestant Church in Donggala (GPID), with around 40,000 members. Last week, Palu teens posted shots on Instagram from Jono Oge, sharing favorite Bible verses and posing in front of a banner reading “From Darkness to Light.”

The quake, tsunami, mudslide, and aftershock have left the Protestant minority in Central Sulawesi—about 17 percent of the 2.6 million-person, mostly Muslim province—scrambling for basic necessities to survive while body bags pile along the streets and the smell of death lingers in the air.

On Tuesday, the official death toll reached more than 1,300, with another 800 injured, and both figures are rising. An estimated 50,000 people are displaced in Palu.

Church leaders who made it through the disaster have rallied to offer relief efforts as they are able, but resources are limited. 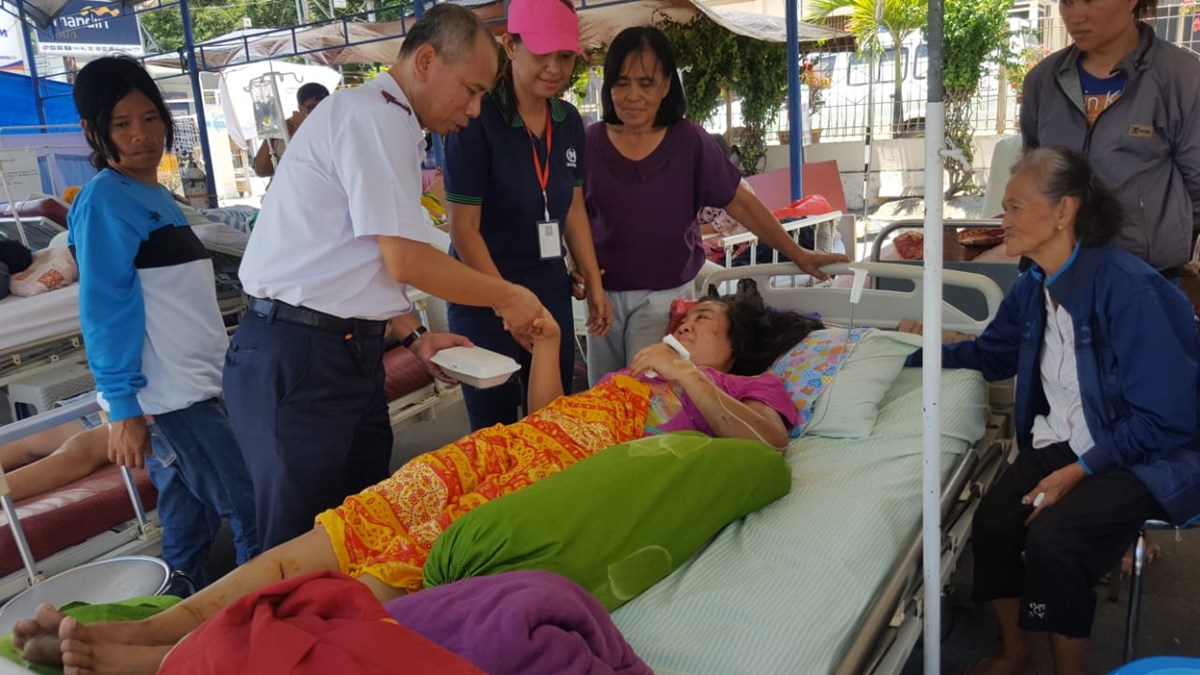 A Salvation Army congregation in Palu set up a kitchen at its building to cook, pack, and deliver 100–300 meals a day, starting the day after the quake and tsunami hit the island. Volunteers don’t know how much longer they can feed desparate families without amenities like grocery stores, gas, and clean water, Santi White, a major with the Salvation Army, told CT.

The church in Palu needs support from near and far, according to White. Like fellow Christians in the capital city, several of their churches have been destroyed, and members of the congregation have lost everything. One family saw their two-story house sink completely into the ground.

Captain Ricosetta Mafella, a Christian and a pilot with Batik Air, watched the tsunami swirl toward the coast as he lifted off from Mutiara SIS Al-Jufrie Airport on Friday evening, the last flight to depart from Palu before the earthquake.

He shared his testimony online and again at a Jakarta church on Sunday, saying he was spurred by the Holy Spirit to take off a few minutes early. The air traffic controller on duty, Anthonius Gunawan Agung, has been hailed as a hero, jumping to his death from the control tower after Mafella’s flight was safely off the ground.

“I felt something wrong on the runway during take off roll. [6:02 pm] earthquake 7.4-7.7 magnitude on scale rocks Palu. Thank God there is a voice (Holy Spirit i believe) telling me to depart early. I’m rushing the boarding process. Late by 30 second i would not have flown. Thank You Jesus.”

Remembering the 21-year-old air traffic controller, he wrote, “Wing of honor for Anthonius Gunawan Agung as my guardian angel at Palu. Rest peacefully my wing man. God be with you.”

Mafella spoke at Duta Injil BIP church in Jakarta this weekend, reflecting on Psalm 23 and how Palu—located at the mouth of a river in Central Sulawesi, between two mountain ranges—had also been nicknamed by some pilots as a “valley of death.”

Central Sulawesi is not as heavily Christian as North Sulawesi, where Protestants outnumbered Muslims 2-to-1 in the 2010 census, but it still has a significant Christian population of nearly a half-million believers. One Indonesia preacher wrote after the disaster that Palu “must be recovered, more advanced & blessed [by] God. What is lost is returned to God two-fold.”

Neighboring cities have seen sectarian conflict between Christians and Muslims over the years, which isn’t uncommon in Indonesia—even during disaster recovery. Following a 2004 tsunami that hit Aceh province, Muslim militants clashed with Christians and foreign aid workers trying to help.

Across Indonesia—home to the largest Muslim population in the world—believers continue to fear persecution by radical Islamists; last week in Sumatra, a trio of churches were forced to close, and suicide bombers attacked congregations in Surabaya back in the spring.

Relief efforts continue at locations like the Roa Roa Hotel, where about 50 guests were reported to be killed or trapped in rubble after the eight-story building collapsed. Just behind the hotel, the IFGF Palu church remains standing. Pastors from the church itself or its Jakarta-based denomination could not be reached by CT to confirm any loss or damage suffered among the congregation.

World Vision, which serves more than 5,000 sponsored children in Central Sulawesi province, set up feeding centers for children outside its office in Palu and has begun distributing relief supplies, even as its own staff of 70 suffers loss from the earthquake and tsunami. 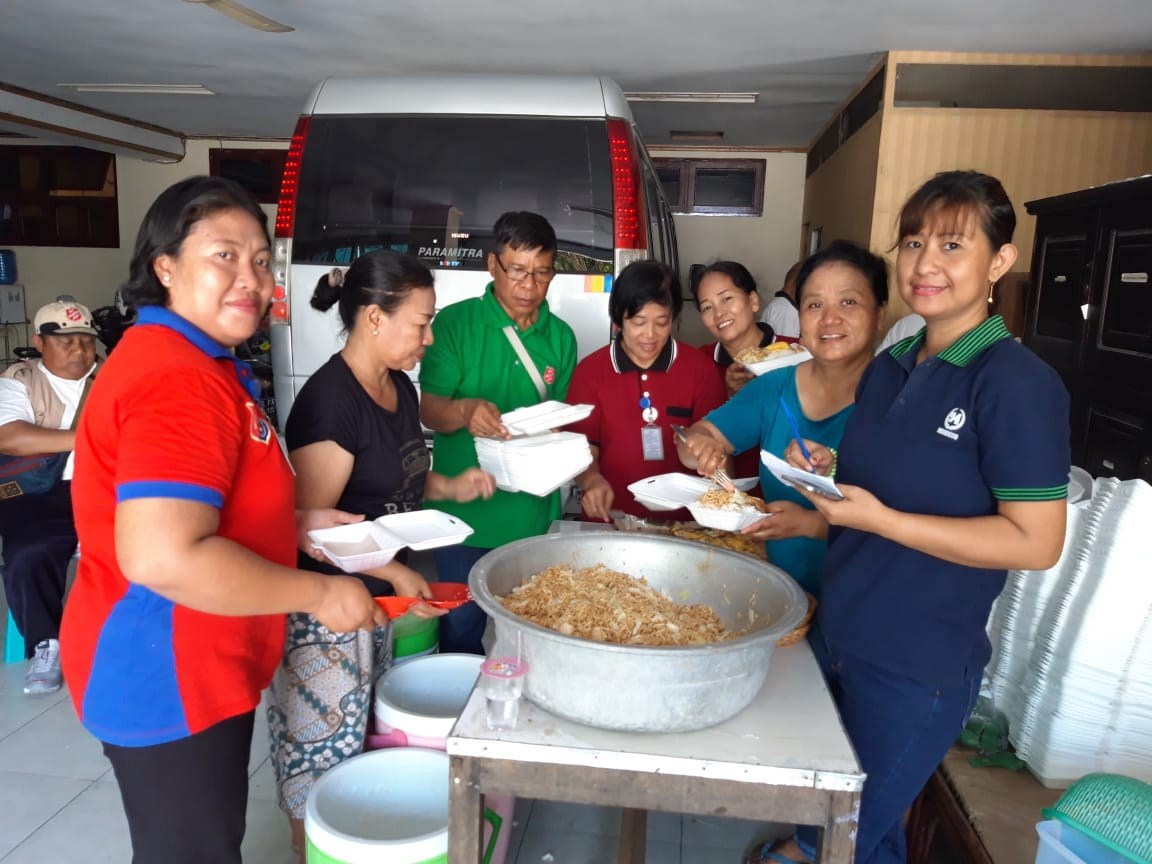 White, with the Salvation Army, said the biggest needs are food, clothing, formula, diapers, and medicines. She is praying her team stays healthy enough to continue the relief work—and fears the spread of disease from bodies buried in open graves.

They are praying for favorable weather for all the families forced to sleep outside—and for God to spare them from future quakes.

Indonesian Churches Pray for Thousands Dead and Missing After Tsunami