In Christ, Alone: Most Believers Say They Don’t Need Others for Discipleship

US Christians are growing in their faith, but many do it on their own, according to LifeWay Research.
Megan Fowler|August 22, 2019 08:00 AM 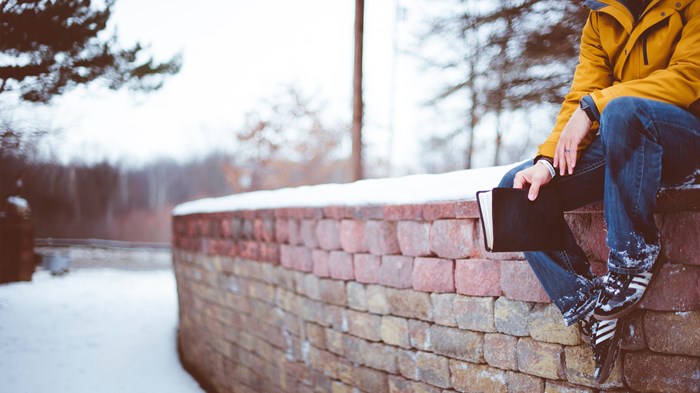 Over the past decade, more believers are heeding the scriptural call to “grow in the grace and knowledge of our Lord and Savior”—but they’re often doing discipleship on their own.

A wide-ranging survey by LifeWay Research found that while US Christians had made improvements in areas like reading their Bibles daily, prioritizing obedience to Christ, and avoiding temptation, their connections with fellow Christians have weakened.

Hispanic and African American churchgoers may represent an exception to the overall trend, showing even greater progress in discipleship while deepening community ties.

The results came from this year’s 2019 Discipleship Pathway Assessment, which tracks eight measures of belief and practice, and can be compared to a similar study LifeWay conducted in 2011.

Among Protestants who attend church at least once each month: 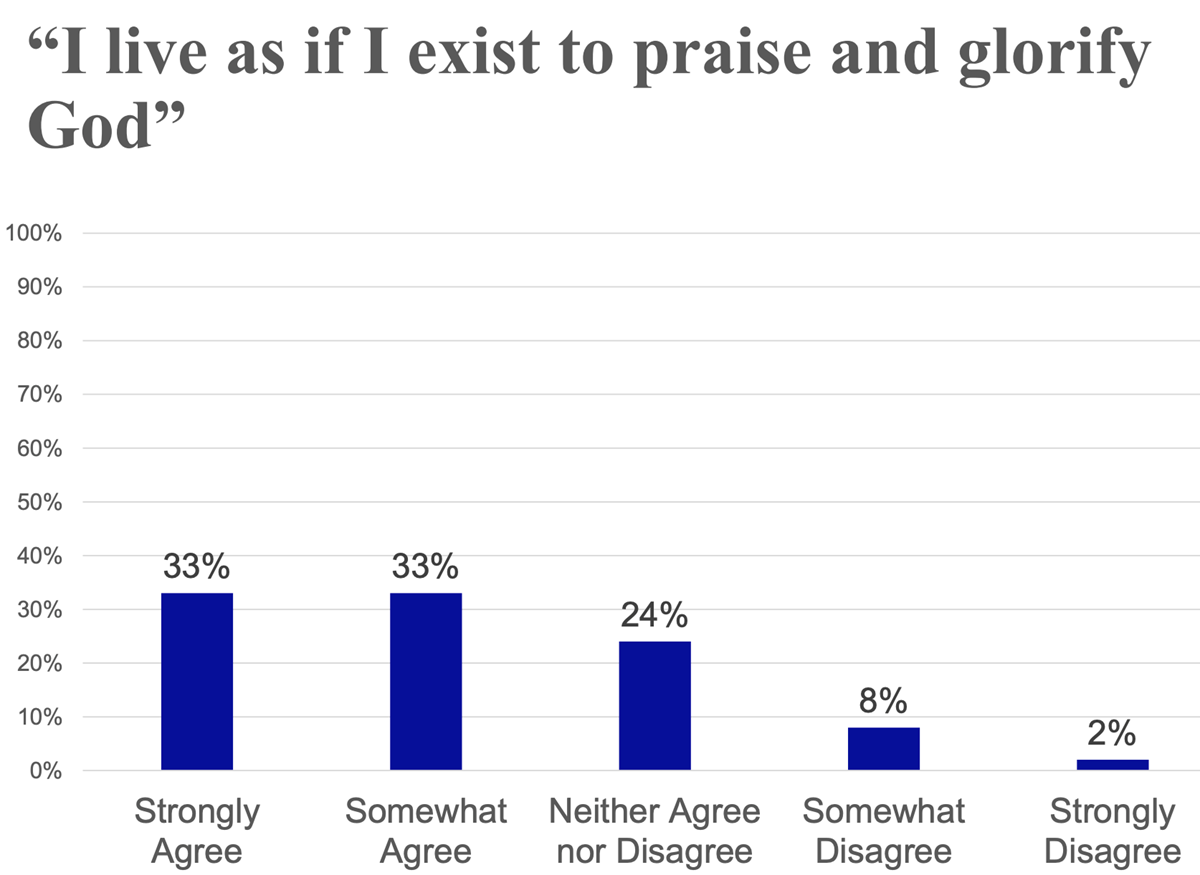 Walking with God, but not others

Despite the gains, the 2019 study shows that today’s Christians struggle to build relationships and share Christ with others. 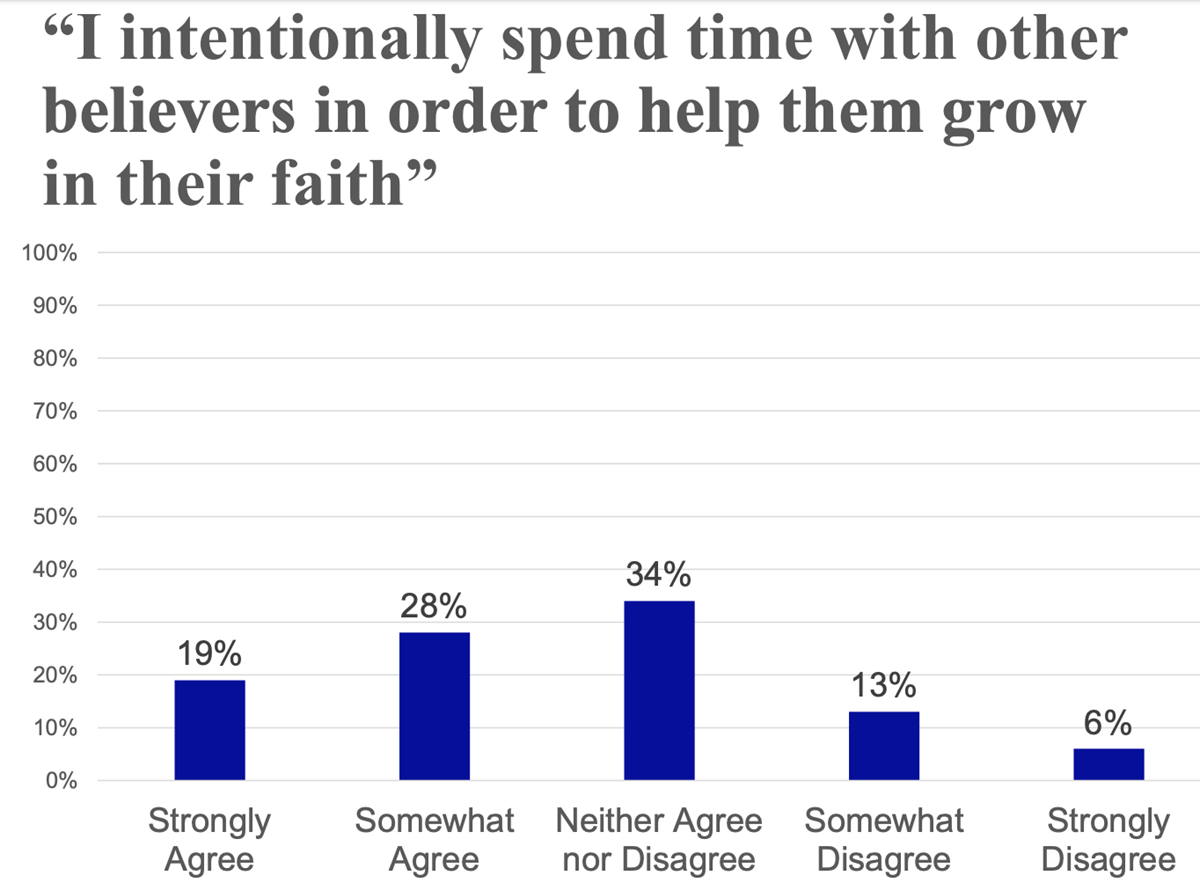 Churchgoers age 65 and older were more likely to have significant relationships with others at church (46%) compared with believers age 18–34 (38%), but individualistic spirituality persists. Nearly two-thirds of churchgoers (65%) agreed with the statement, “I can walk with God without other believers.”

“The places where [believers] struggle the most are sharing Christ and building relationships, and those two are related because we see in Scripture that Jesus prayed we would be one, and that only comes through building relationships with other believers,” LifeWay Research executive director Scott McConnell said.

“That witness is closely tied to our ability to build relationships with other believers, and that’s a weakness in the church today.”

Faith and friendship among minority groups

In both internal and external indicators, Hispanics and African Americans churchgoers show more progress in discipleship than white believers.

More than other ethnic groups, Hispanics strongly agreed that they think about biblical truths throughout the day (52%), believe that God still loves them in difficult times (55%), believe that self-denial is part of the Christian life (53%), and live to glorify God (50%).

Hispanics also strongly agreed to statements regarding external signs of discipleship. They have the highest percentage of daily Bible readers (40%) and were more likely to develop significant friendships with other believers (50%), mentor other believers (32%), and serve people outside the church with tangible needs (38%).

Ariel Irizarry, global training strategist with LifeWay Global, believes the Hispanic culture places such a premium on interpersonal relationships that this naturally extends to how Hispanic believers grow in their faith. And for first- and second-generation immigrants, the church can be a place to help them feel less alone in a new land.

The experience of being foreigners “gives them the desire and intentionality to seek more disciplines and grow in the disciplines of serving others and reading Scripture,” Irizarry said.

“They need it to overcome difficulties. You feel like you need all those things in order to overcome and be a person who glorifies God and conquers the situation.”

A recent survey by the Send Institute at Wheaton College’s Billy Graham Center and conducted by LifeWay found that this approach has grown and strengthened Hispanic church planting: New Hispanic ministries saw an average of 53 first-time professions of faith over their first four years.

African American churchgoers also demonstrated a deeper commitment than white Christians. African Americans most strongly disagreed with the statements “Many aspects of who I am have nothing to do with God” (56%); “I sometimes doubt that God can change the lives of non-Christians I know” (60%); and “Throughout many of my activities, I don’t think about God” (55%).

But African Americans also showed mixed results in valuing relationships with other believers. Half agreed with the statement, “I can walk with God without other believers” (50%).

Earlier surveys by Pew Research and the American Bible Society have shown higher levels of Bible reading and belief among African Americans.

LifeWay’s research also noted differences in the way believers over 50 and those under 35 express their faith.

They reported higher rates of reading the Bible every day and setting aside time for private worship every day. Also, believers over 50 more strongly believed that God can change the lives of nonbelievers.

But younger believers seem more likely to demonstrate outward expressions of faith. A higher percentage of young believers (41%) agreed that they need other believers in their lives compared to Christians over 65 (34%).

While LifeWay has not fully explored the factors leading to the improved discipleship habits overall, McConnell suggested that it might be connected to nominal Christians leaving the church. “As cultural Christianity disappears, those who attend [church] occasionally but aren’t fully engaged stop coming,” he said.

For the research, LifeWay surveyed 2,500 Protestant churchgoers January 14–29, 2019, using a national panel of respondents. The margin of error is +/- 2 percent, and higher among subgroups.

In Christ, Alone: Most Believers Say They Don’t Need Others for Discipleship

In Christ, Alone: Most Believers Say They Don’t ...