The initiative aims to convert 1 in 5 WEA churches and institutions to renewable power by 2025. 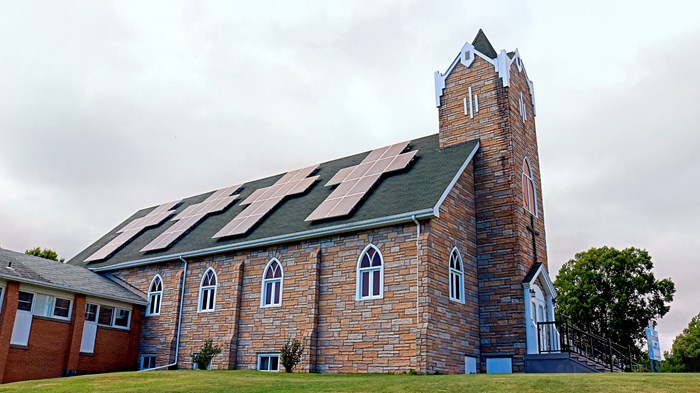 Solar panels could be coming soon to a church near you. Through a campaign called Project 20.’25, the World Evangelical Alliance (WEA) has set out to get 20 percent of its members to convert fully to clean energy by 2025.

Clean energy reduces air pollution, which improves human health and productivity; preserves nonrenewable resources; and cuts down on the emission of greenhouse gases that trap heat and can fuel, among other things, extreme weather that impacts food production and human safety.

“Christians should be at the forefront of efforts to reduce air pollution and greenhouse gas emissions because we know that this is our Father’s world,” Galen Carey, the National Association of Evangelicals’ vice president of government relations, told CT. “We also know that these efforts will particularly benefit our most vulnerable neighbors, those whose health and livelihoods most directly depend on clean air and a stable climate.”

There is also a financial benefit to making the shift to renewable energy, with wind and solar power being the most cost-efficient sources when installing new electricity-generating capacity.

“It doesn’t only make environmental and social justice sense—it makes economic sense,” said Brent Nelson, a group manager in the materials and chemical science and technology directorate of the National Renewable Energy Laboratory. “Renewable prices have fallen, and we’ve entered the era of extreme fossil fuels. The easy stuff has been extracted; we now have to go to extreme measures to continue using fossil fuels. This means going forward, it is good financial stewardship to shift to clean energy.”

In the US, the number of congregations using solar power more than doubled between 2016 and 2019, according to Interfaith Power & Light, which campaigns to mobilize people of faith to take action on climate change. As of November, 770 American congregations report the use of solar photovoltaic systems, which convert sunlight into electricity. California boasts the most solar-powered churches, followed by Massachusetts; Washington, DC; and Indiana.

Project 20.’25 and its supporters point to biblical principles that undergird its creation care engagement.

Carey notes the cultural mandate of Genesis 2:15—“The Lord God took the man and put him in the Garden of Eden to work it and take care of it”—and the recognition in Psalm 24:1 that all things belong to God—“The earth is the Lord’s, and everything in it, the world, and all who live in it.”

Responsible care for creation not only honors the Creator, but bears a powerful witness to secular environmentalists, said Carey.

Carey, Nelson, and a host of evangelical leaders have also pressed addressing the changing environment as a means of loving the least of these, claiming that projected environmental shifts could represent an even more severe threat to the poor.

“It’s important to understand that people of low-income and/or minority communities are inextricably linked to environmentally hazardous or degraded environments, such as toxic waste, pollution, and urban decay,” said Nelson. “Since social justice and environmental concern are directly coupled, the clean energy campaign is one way to fulfill the call of Christ.”

Nelson emphasizes the importance of clean energy, but even more of energy efficiency. According to data from Interfaith Power & Light, most churches can slash their power costs by as much as 30 percent simply by investing in more efficient equipment and facility upgrades.

“Spend your energy budget first on energy efficiency then on renewable generation,” said Nelson. “Every unit of energy you don’t use costs less than generating it.”

While there are plenty of environmental campaigns that can act as touchpoints for concerned citizens, Brian Webb, sustainability director at Houghton College and director of Climate Caretakers, an organization that engages Christians on climate change, told CT that Project 20.’25 is something unique: “This is a vision for us as evangelicals.”

Among Christians, mainline denominations have been more on the front edge of the clean energy movement than evangelicals. The WEA initiative may provide the impetus to catch up.

At Houghton, Webb oversees the school’s Center for Sustainability, which includes one of the largest solar energy projects among Christian colleges in the United States. When it was completed in 2015, the system generated more solar power than any other college in New York, enough to power 300 homes per year. The school also hosts events to engage students about creation care issues and is working on a number of sustainability projects like reducing energy and water consumption.

“The idea behind the WEA initiative, as well as behind Houghton’s initiative, is simply a response to our biblical call to love God, love our neighbors, and care for what he has made,” said Webb.

Webb said Christians actually have even more motivation to care for creation than secular environmentalists. “We have the same scientific reasons; there are important environmental issues out there. There are the same common-sense reasons that, of course, we want to care for the place where we live. But on top of that, we have a really significant theological reason.”

Webb pointed out that evangelicals tend to align themselves with conservative politics, and environmental initiatives are often viewed as tied to a more progressive agenda, so evangelicals have too often steered clear of environmental causes because of political perception.

“Of course, if you look at our theology, our Scripture, there’s great justification for wholeheartedly embracing clean energy and environmental stewardship,” said Webb. “But I think often our cultural identities and political affiliations make it harder for us to engage with these kinds of initiatives.”

A 2015 Pew Research Center survey found that 28 percent of evangelicals believed in global warming caused by human activity, compared to half of Americans overall.

But as sustainability issues continue to dominate news cycles and policy agendas, creation care is becoming a larger priority, especially for young Christians. Project 20.’25 reflects that shift, and the desire for evangelicals to act.

“If Christians aren’t leading the way, that’s a shame,” said Webb. “We’re missing out on an opportunity to demonstrate Christ’s love for the world by taking seriously our role as stewards of God’s creation.”