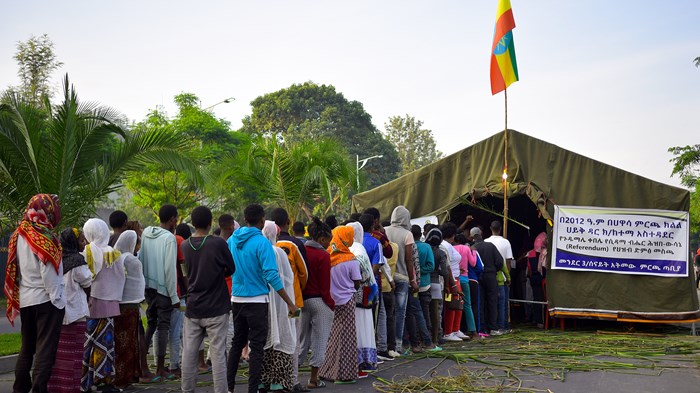 Image: Michael Tewelde / Contributor / Getty
Voters wait to cast their vote during the Sidama referendum in Hawassa, Ethiopia, on November 20.

Across the highland region famed for its flavorful coffee exports, voters lined up as early as 4 a.m. on November 20, smiling and waving their green identification cards.

“For the last two months, the church was praying and fasting daily,” said Tessema Tadesse, pastor of a Kale Heywet church in Hawassa, the capital of Sidama. “And on Sunday, the preaching was around peace, love, and embracing others.”

Kale Heywet (Word of Life) is one of Ethiopia’s largest “Pente” or evangelical denominations, with approximately 1,000 congregations in Sidama alone. (Though Pente, pronounced Pent-ay, originated as an Ethiopian term for Pentecostals, it has come to refer to most non-Orthodox Christians, with the closest US equivalent being evangelical.)

Evangelicalism in Ethiopia originated in Sidama, where 87 percent of the population self-identified as Protestants in the 2007 census. Overall, in Africa’s second-most populous nation, evangelicals only comprise about 19 percent of Ethiopia’s 112 million people, while the Ethiopian Orthodox Tewahedo Church comprises about 40 percent, according to the World Christian Database.

“We believe we can understand the Bible, in the priesthood of all believers,” he told CT. “That narrative might have made them think more about the individual.”

Even so, religion was not the source of this political movement, said Nigussu Legesse, executive director of the Consortium of Christian Relief and Development Associations (CCRDA) and a referendum observer chosen by the National Election Board. He traced Sidama’s desire to be a separate regional state back to the imperial time, in the early 20th century.

Recognizing this impulse, self-administration was extended to the Sidama people—Ethiopia’s fifth-largest ethnicity, comprising approximately 4 percent of the nation’s population—by the previous communist Derg regime, which ruled from 1974 to 1989. After the collapse of the Derg, the new government included the eponymous zone—1 of 68 in Ethiopia—in the larger administrative state of the Southern Nations, Nationalities, and Peoples Region (SNNPR), composed of more than 40 ethnic groups.

Sidama’s path to full statehood has been a tension point in Ethiopian politics. Prime Minister Abiy Ahmed, who won the Nobel Peace Prize in October for his peacemaking efforts, was initially praised for working to make the historically repressive society more open. But the democratization process has also made room for old ethnic tensions to resurface.

In July, youth mobs agitating for independence burned two Orthodox churches and killed dozens of people. After continued clashes between nationalist activists and security forces, the region was placed under military control.

Ethiopia’s 1994 constitution provides for federalism and its Article 39 outlines self-administration by ethnic groups. However, the central government in Addis Ababa has long suppressed any pushes for ethnic autonomy beyond the original nine states, which were determined by the ruling party during Ethiopia’s transition from communism. The ethnically-defined regional states—of which Sidama is now to become the 10th—have a degree of independence from the central government on issues such as land ownership and taxation. Each state also has its own security force.

“The Sidama referendum is an expression of the democratization path Ethiopia has set out on,” said Abiy [Ethiopians go by their given names] in a tweet congratulating the Sidama people. “The voting process is demonstrative of our capacity for taking our differences to the ballot, and allowing democratic processes to prevail.”

But the way forward is unclear. Inspired by Sidama’s example, other ethnic groups in SNNPR are currently discussing whether to pursue autonomy. The conflict and tensions that marked Sidama’s path to statehood, if repeated, could lead to greater instability.

In 2018, the Internal Displacement Monitoring Center reported that Ethiopia had the world’s highest number of conflict-related internally displaced peoples (IDPs): nearly 3 million people have been forced from their homes by ongoing inter-communal violence and ethno-nationalism. Increasing fragmentation on ethnic lines could also pose a threat to Abiy’s push for unity ahead of national elections scheduled for May 2020.

In multi-ethnic Hawassa, which has also been the SNNPR state capital, it is not yet apparent what the implications of the referendum will be for non-Sidama peoples. In July, some of their properties were targeted for attacks.

“Being a state does not mean pushing others from the community,” said Tessema, who said many of his fellow pastors have been preaching similarly. He is also the chairman of the Hawassa Inter-Religious Council, which has worked to promote peace and constructive dialogue in the capital.

And though the right to statehood is stipulated in Ethiopia’s constitution, logistical details of how independence will be implemented remain ambiguous—and potentially inflammatory.

“Ethnicity is not the problem, but being ethno-centric is,” said Tsedaku, the ECFE president. “You can demand your rights, but you must be careful not to take others’ in the process.

“As a Christian, you must be a voice to the voiceless.”

The church in Sidama could play a vital role moving forward.

Despite the mob violence, the overall peaceful referendum process is largely due to leaders preaching peace, said Nigussu. People respect their pastor’s word.

“Especially in Sidama, which is mostly Christian, the church must promote peace,” said Tessema. “Even now, church leaders are gathering together, discussing and praying about how we can continue this peace.”

In the Ethiopian context—with so many ethnicities, languages and peoples—Tsedaku said, “Loving your neighbor means loving people from a different tribe.

“The other deserves the same respect, love, and equity as I do. Ultimately we are all human, created in the likeness of God.”