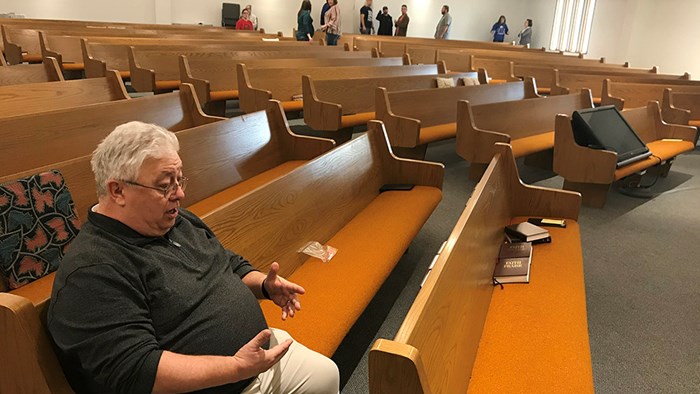 Image: Bobby Ross Jr. / The Christian Chronicle / RNS
Minister Britt Farmer sits in the spot where he witnessed two of his fellow church members lose their lives on Sunday.

The West Freeway Church of Christ, a close-knit congregation of about 280, didn’t get to finish its Sunday morning worship assembly.

So Monday night—roughly 30 hours after a gunman killed two beloved Christians during the Lord’s Supper before an armed member fatally shot him—the suburban Fort Worth church came together.

A standing-room-only crowd squeezed into the church fellowship hall, next door to the closed auditorium where the shooting occurred, to grieve, pray and sing “Amazing Grace,” “Precious Memories,” and “It Is Well With My Soul.”

“What happened yesterday is not something that we will ever be able to explain,” minister Britt Farmer told church members, who shared hugs and tears before the special gathering as canine officers made sure the building was secure.

“There is evil in this world, and evil took two of my dear friends yesterday,” Farmer added. “Not a bullet from a gun—evil. Not ideology—evil.”

But the preacher, occasionally overcome with emotion that made it difficult for him to speak, declared that he would not let evil win.

“The battle belongs to God!” he said to amens and applause.

Farmer praised his family—all four of his adult children traveled home after the shooting—and his spiritual family for the support they have shown him.

“You are incredible, and I love you, and I mean that from the bottom of my heart,” he said.

Mike Tinius, one of the church’s five elders, wrapped an arm around Farmer and led the church in prayer.

The elder added, “Father, we even grieve the soul of the one who wronged us.”

The gunman, identified by authorities as Keith Thomas Kinnunen, 43, slipped into the Sunday service wearing a long black wig, a fake beard, and a bulky jacket, witnesses said.

During the Lord’s Supper, Kinnunen pulled out a modified, 12-gauge shotgun with a pistol grip, Farmer told The Christian Chronicle.

Farmer said the gunman’s motive remained unknown. But after seeing a photo of Kinnunen without his disguised appearance, the minister recognized him.

“We’ve helped him on several occasions with food,” Farmer said. “He gets mad when we won’t give him cash. He’s been here on multiple occasions.”

Kinnunen’s first two shots killed deacon Anton “Tony” Wallace, who held a silver tray as he served Communion, and church security team member Richard White, 67, who yelled “Drop it!” at the gunman as he reached for his own pistol.

Wallace, a father of two and grandfather of four, was the church’s deacon over community outreach and visitation. He preached periodically at a predominantly black Church of Christ in Mineral Wells, about 45 miles west of White Settlement. He volunteered each summer at a Christian youth camp.

“He just loved kids,” Farmer said. “Tony was a joy to be around. He loved to sing.”

“Preachers don’t get friends like that very often,” Farmer said. “He never held me to a higher standard.”

“It was a box of golf balls, and the dirty dog put ‘Property of Britt Farmer’ on them so if I hit them into the woods, somebody would know I’d done it,” Farmer said.

Both victims were at the back of the auditorium, where Kinnunen had taken a seat, gone to the restroom during the “meet and greet” time at the service’s start and quickly drawn the attention of the church security team.

“When he came in, he was under observation. … This was (a case of) ‘maybe it’s nothing, but maybe it’s worth looking into,’” said church elder John Robertson, who mans the church’s video room. “We had put him on isolation on one of the cameras back here so we could see that he was behaving at the moment.

“So when he got up between the bread and the cup, or right after the prayer, we said, ‘We need to make an intervention,’” Robertson added.

But before that could occur, Kinnunen brandished his weapon and opened fire.

As the attacker turned toward the front of the auditorium, he fired a third shot. It ended up in a wall to the right of the pulpit stage where the congregation’s children normally bring change—part of a “Coins for Christ” ministry—after Communion.

Wilson’s single shot struck Kinnunen, who immediately fell to the ground. A bullet hole was visible Monday in the side wall by the pews where the gunman stood. The smell of gunfire remained strong.

“The events at West Freeway Church of Christ put me in a position that I would hope no one would have to be in,” Wilson wrote on Facebook, “but evil exists and I had to take out an active shooter in church.”

Other church security team members with handguns approached Kinnunen as the six seconds of gunfire ended—the loud blasts replaced with screams and crying from the shocked congregation.

Police arrived within two minutes. However, Farmer said it felt like an eternity.

“The citizens who were inside that church undoubtedly saved 242 other parishioners,” Jeoff Williams, regional director of the Texas Department of Public Safety, said Sunday. “The true heroes are the people who were sitting in those pews today—the immediate responders who saved their fellow citizens. I just can’t overstate how critical that is for everyone to recognize. It is truly heroic.”

The West Freeway church beefed up its security team after the November 5, 2017, massacre at the First Baptist Church of Sutherland Springs, Texas, in which a gunman killed more than two dozen people, one of whom was pregnant. The gunman later killed himself.

Typically, anywhere from 25 to 30 West Freeway members carry concealed handguns on any given Sunday, Farmer said.

However, he said that number “would have been a lot less” Sunday because a number of people were away for the holidays.

Hugh Galyean, the church’s volunteer worship coordinator, spent 30 years as a Maryland state trooper and an FBI agent in Louisiana, Nebraska, and California.

Galyean, a member of the church security team, said he had leaned down to take a Communion cracker when he heard the first shot.

“And I saw the flash in my peripheral vision and immediately knew it was him,” Galyean said of the strangely attired visitor, whom he had noticed sitting not far from him. “And I did as my training taught me: Go to cover first and then bring your weapon up. By the time I did that, our head of security had already taken the one shot that killed the guy.”

Galyean, the song leader at Monday night’s service, said he wasn’t surprised the gunman was able to get off shots.

“The only way you would have prevented this is to search him,” Galyean said.

But the church doesn’t want to search people, he said. It wants to welcome them into God’s family.

The question: Where is the line between loving people and protecting the flock?

Bobby Ross Jr. is editor in chief of The Christian Chronicle, where this story first appeared. The original version of this story can be found here.