Update: The memorial is a Christian symbol—but also more than that.
Compiled by Kate Shellnutt|June 20, 2019 10:00 AM 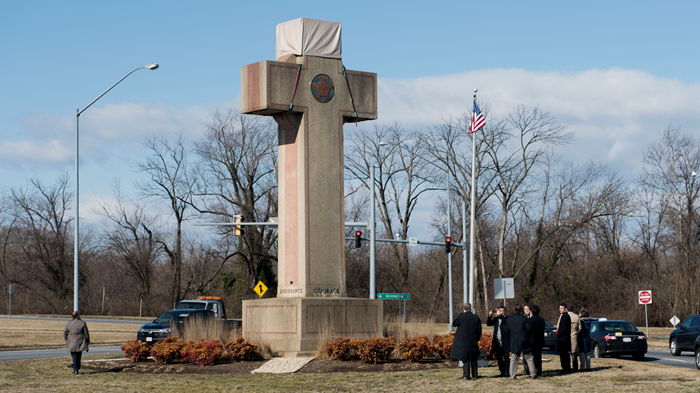 Luke Goodrich, vice president and senior counsel with the religious liberty firm Becket Law, said while this decision represents a victory for the Bladensberg cross, “it will take careful reading and digesting of the opinion to sort through exactly what it means for future cases.”

Original post (February 28):During yesterday’s oral arguments, the Supreme Court suggested it would allow a 40-foot memorial cross to stay on public land, despite a challenge from an atheist group concerned that the 83-year-old World War I monument represented a government endorsement of religion.

The hour-long debate in the case of American Legion v. American Humanist Association didn’t just raise the question of whether the “Peace Cross” memorial was constitutional, but also whether it was a secular symbol.

The lawyer for the Maryland parks agency that now maintains the cross—which is located in a median in the city of Bladensburg—argued before the high court that the historic marker served a secular purpose in honoring the fallen. “The easiest way to resolve this case is to say, in the wake of World War I, crosses like this one have an independent secular meaning,” said Neal Katyal.

The Justice Department shared the defense, with acting solicitor general Jeffrey Wall appearing as a friend of the court. He told the justices, “To say the cross has only that religious meaning I think would condemn every cross in the public sphere.”

Though the panel seemed willing to permit the historic memorial cross, the defense that the cross had become a secular symbol got little traction.

“I mean, it is the foremost symbol of Christianity, isn't it?” asked Justice Elena Kagan, who is Jewish, when Wall argued the cross could take on a secular meaning. “It invokes the central theological claim of Christianity, that Jesus Christ, the Son of God, died on the cross for humanity's sins and that he rose from the dead. This is why Christians use crosses as a way to memorialize the dead.”

Some legal experts initially believed this Bladensburg cross case would establish new precedent for religious symbols in the public square. After oral arguments, many are now expecting a much narrower decision come June.

Still, the justices, particularly Justice Neil Gorsuch, may opt to dismiss a previous church-and-state separation test that required a “secular purpose” for government action involving religion. The Lemon Test, named for a 1971 ruling barring state funding for Catholic school teachers, was used in federal appeals court to call for the removal of the Peace Cross, but Gorsuch pointed out that the Supreme Court has rarely used it, which has led to confusion. “Is it time for this Court to thank Lemon for its services and send it on its way?” the new justice mused.

CT asked several legal experts to respond: Should the memorial cross be ruled “secular” to stay in the public square?

No. The cross of Christ is a symbol with inherent religious meaning, but the Court doesn’t have to answer this question to say that the Bladensburg Cross should continue to stand. The question before the justices in the Bladensburg Cross case is much simpler than the complex questions Christians face living as principled pluralists in a diverse society.

As we argued to the Court in our amicus brief, maintaining a nearly century-old concrete memorial is hardly an official declaration in law for Christianity.

No, we do not want to see the Supreme Court rule that the cross is a secular symbol. First, this position seems somewhat disingenuous to many Americans. Yes, the cross can stand as a symbol for death and for honor. However, the cross simply cannot be wrested from its place as one of the central symbols of the Christian faith.

Second, this argument appears to be primarily driven by a misplaced litigation strategy that assumes the Establishment Clause tolerates no connection between government and religion. But the Supreme Court has affirmed repeatedly that the Constitution does not “require complete separation of church and state.”

Third, this position assumes a false dichotomy between the sacred and the secular. As Christians, we recognize that Christ claims every square inch of this universe as his own (Col. 1:15–18). There is no “neutral” or “secular” sphere of life that is not under his influence. It is simply wrong to claim that this memorial cross falls into a secular realm that, according to the Scriptures, does not exist.

Emilie Kao, director for the DeVos Center for Religion and Civil Society at The Heritage Foundation:

America’s Founders did not envision either a sacred or a secular public square. From Gettysburg to Arlington Cemetery, Americans of many faiths and none have commemorated those who died in battle with symbols of significance to them.

The Gold Star mothers who honored their sons’ service with the Cross, a universal symbol of service and sacrifice, did the same. There is nothing unconstitutional about allowing this century-old war memorial to bear witness to those who defended our freedoms.

David A. Cortman, senior counsel and vice president of US litigation with Alliance Defending Freedom:

Bladensburg’s “Peace Cross” honors veterans who gave everything to serve their country, but one group’s displeasure over the monument’s shape can’t diminish their sacrifice or dismantle their memory.

The Supreme Court was right to take up this case so that it has the opportunity to affirm that the offended feelings of someone driving by do not amount to a constitutional crisis. A passive monument like the Bladensburg Cross, which celebrates our veterans and acknowledges our nation’s religious heritage, simply does not amount to an establishment of religion.

The Bladensburg WWI Veterans Memorial is inarguably a religious symbol. Its use here is to memorialize 49 men from Prince George’s County, Maryland, who died defending our freedom. Their mothers chose the design to be reflective of their sons’ gravestones in Europe. The Supreme Court may be the last hope for preserving the 90-year-old Bladensburg WWI Veterans Memorial.

We suggest that the Lemon Test has become unworkable, leading to silly and sometimes absurd results. Instead, we hope the Court will return to an historic reading of the Establishment Clause, one that looks at whether the government action is coercing a citizen into some kind of religious belief or behavior. Passive memorials like this one coerce no one to do or believe anything. It simply uses a Celtic cross to memorialize the service and sacrifice of 49 men who died in World War I.

CT previously asked about the sacred or secular nature of memorial crosses a decade ago, when the Mohave Memorial Cross case went before the Supreme Court.