Congress’s ‘Other’ Christians: The Fastest-Growing Faith on the Hill

A record 1 in 5 freshman politicians falls into a Protestant catchall category.
Kate Shellnutt|January 3, 2019 09:00 AM 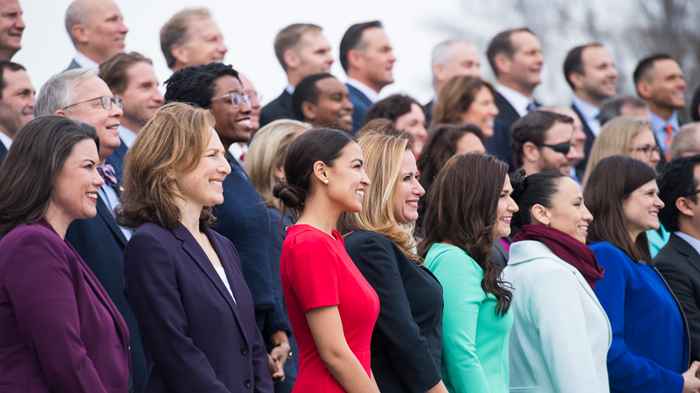 Image: Tom Williams / CQ Roll Call via AP Images
Members-elect pose for the freshman class photo on the East Front of the Capitol.

At the swearing-in of the 116th United States Congress today, nearly 100 new legislators will take the oath of office, pledging to “well and faithfully discharge” their new duties, “so help me God.”

Though the overall number of Christians in Congress fell slightly from 91 percent from 2017 to 88 percent in 2019, a vast majority of freshmen—78­ of the 96 newly elected lawmakers—identify as Christian and around half—47—are Protestants, according to the Pew Research Center’s Faith on the Hill report.

With the largest freshman class since 2011, these representatives bring historic levels of diversity to Washington, a range of backgrounds outside politics, and deep convictions about faith in governance. The group includes Sunday school teachers, deacons, Christian college graduates, missions trip participants, prayer advocates, a former aspiring pastor, and plenty of churchgoers.

“In Romans 13, government officials are described as ministers of God,” said Senator Josh Hawley of Missouri, who assumes Claire McCaskill’s seat, in an interview last year about his faith. “That’s how serious God is about politics.”

Former counsel with the religious liberty legal group Becket (where he helped defend the Hobby Lobby and Hosanna-Tabor cases before the Supreme Court), Hawley belongs to the Evangelical Presbyterian Church, speaks before Baptist crowds, and is one of 22 freshmen who identify as unspecified/other Protestants in the congressional questionnaire from CQ Roll Call, the basis for the Pew report released today. 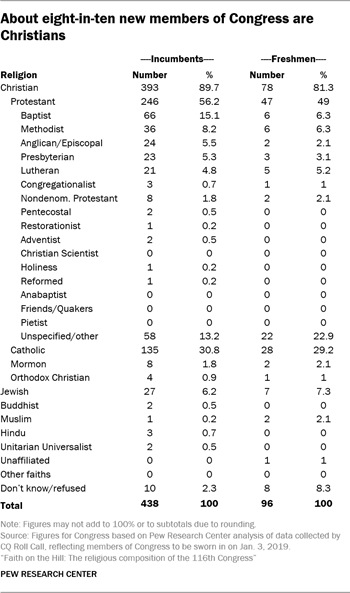 Following the midterms, the unspecified/other Protestant category saw the biggest bump of any faith tradition, adding 16 seats in this session—double as many as the next largest gain of 8 seats, which came among those who declined to provide a religious identification.

Congress now includes a total of 80 unspecified/other Protestants. Though the catch-all affiliation is among the most overrepresented in the legislature (15% of representatives compared to 5% of American adults), the disparity may be in part due to elected officials opting not to indicate a particular tradition.

Several of the incoming representatives who selected the unspecified/other Protestant category do attend denominational churches, such as Representative Dusty Johnson of South Dakota, who built houses in Haiti on a short-term missions trip with his Evangelical Lutheran Church in America (ELCA) congregation earlier this year; Representative Kendra Horn of Oklahoma, a Southern Baptist-turned-Episcopalian who prayed the words of St. Francis of Assisi every day of her campaign, according to a Religion News Service report; and Representative William Timmons of South Carolina, a member of Greenville’s Christ Church Episcopal whose faith inspires him to advocate for victims of domestic violence.

“While the issues we represent affect much more than Southern Baptists and while we have great relationships with members of Congress across denominations, we are always grateful when our Southern Baptist brothers and sisters are elected to Congress,” said Daniel Darling, vice president of communications for the Ethics and Religious Liberty Commission.

“We do try to build special relationships with those SBC members and their staffs, and we find that sharing a common faith tradition helps us in our advocacy because we are working from many of the same assumptions,” he said, noting recent partnerships with incumbents Mark Walker, Mike Johnson, and James Lankford.

Baptists represent the largest Protestant affiliation in the country, about 15 percent of US adults, and they make up 13.5 percent of Congress, with 72 members total.

Representative Ayanna S. Pressley, Massachusetts’s first African American congresswoman, attributes her passion for speaking to her upbringing in her grandfather’s storefront Baptist church. Representative Carol Miller of West Virginia, another incoming Baptist, campaigned on her habit of praying before every vote while in the state legislature.

Anglicans and Episcopalians, Lutherans, Presbyterians, and Methodists make up between about 5 percent and 8 percent of Congress a piece, a few percentage points higher than each denomination’s current share of the US population.

Pentecostals (0.4% of Congress) and nondenominational Christians (1.9%) remain underrepresented, but some lawmakers from those traditions may use the popular unspecified/other Protestant category instead.

Representative Joe Cunningham of South Carolina, for example, attends nondenominational Seacoast Church outside of Charleston but identifies as unspecified Protestant. The incoming congressman said his positions on health care and climate change come from his Christian faith.

Another unspecified Protestant, Senator Kevin Cramer of North Dakota, attends New Song Church, affiliated with the International Church of the Foursquare Gospel. The Hill reported that the Concordia College graduate and one-time aspiring minister switched from mainline Lutheran to evangelical and views his political career as a Christian vocation. “I really see the vocation of politics like I see every vocation … as an extension of ministry,” said Cramer.

Overall, though the portion of Christian lawmakers continues to dip slightly, there are still a higher share of Christians in Congress (88.2%) than in the US overall (71%).

The biggest gap in congressional representation comes among the religiously unaffiliated. While nearly a quarter of Americans fall into the “nones” category (23%), just one member of Congress does (0.2%). (This year, that sole lawmaker—Kyrsten Sinema of Arizona—was elected to the Senate after three terms in the House.) 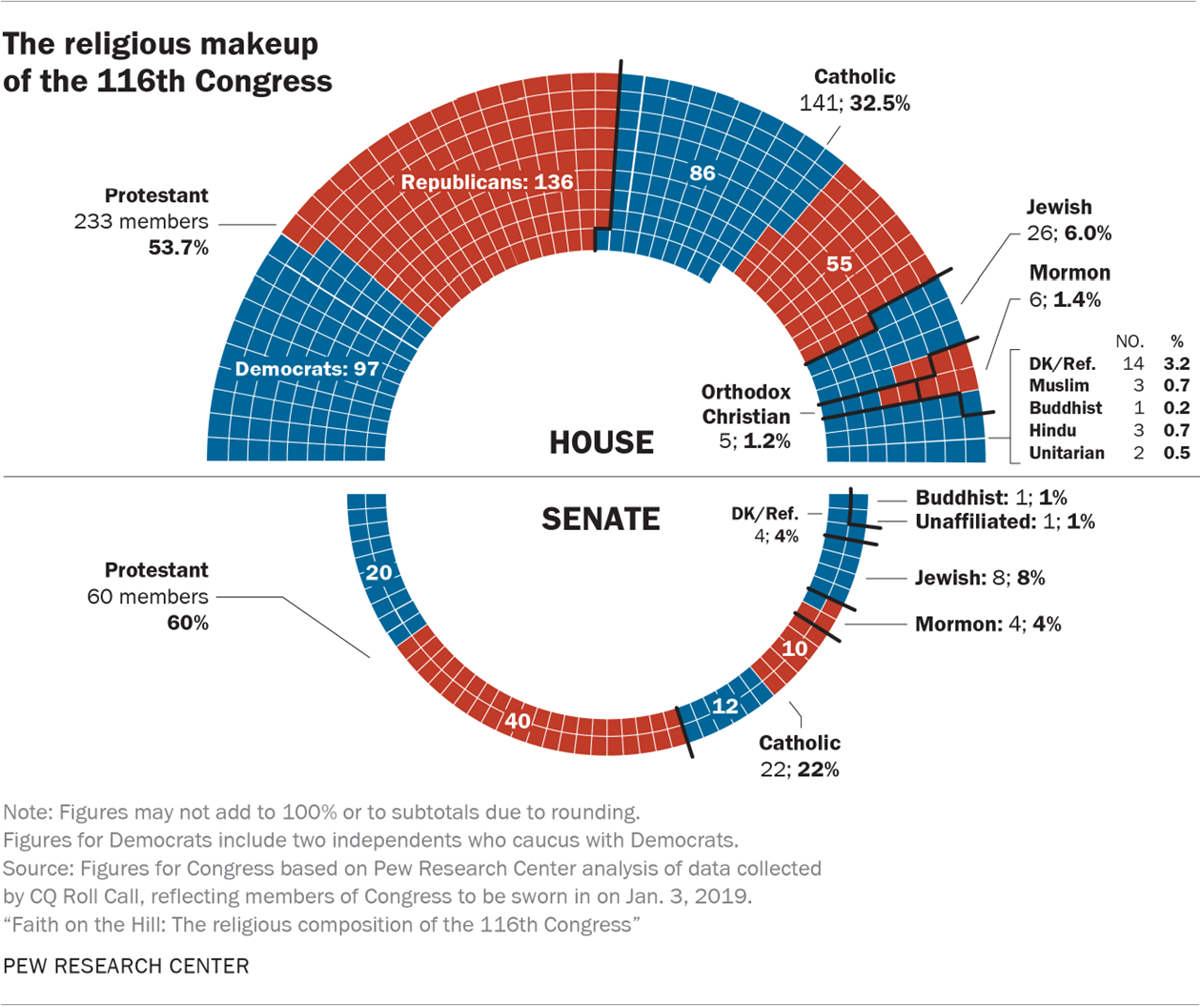 The 116th Congress represents the lowest level of Christians (471) and Protestants (293) among the 11 congresses analyzed in the report.

Yet, “Catholics have held steady at 31 percent over the last four congresses, although there are now many more Catholics in Congress than there were in the first Congress for which Pew Research Center has data (19% in the 87th Congress, which began in 1961),” researchers stated.

CT previously reported on how pro-life Democrats struggled during the 2016 midterm elections.

Congress’s ‘Other’ Christians: The Fastest-Growing Faith on the Hill

Congress’s ‘Other’ Christians: The Fastest-Growing ...