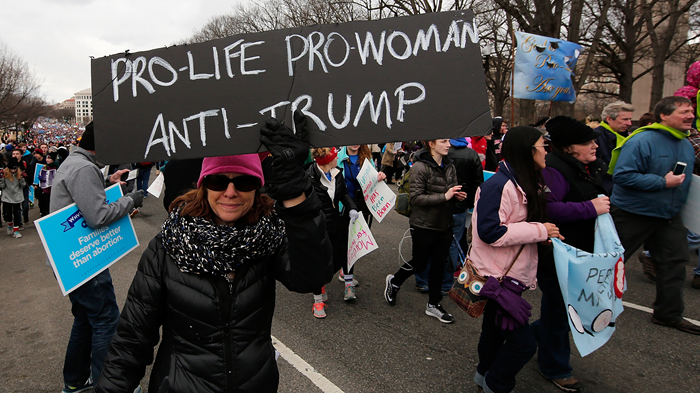 Some pro-life Democrats insisted that the only way their party would bring a “blue wave” in the midterms was if it wooed disenchanted Republican voters—including evangelicals—with candidates who took more moderate positions on abortion.

If 2018 was a test of this theory, as reported by Politico, the results are too few and too mixed to assess whether they were right. Barely any pro-life Democratic candidates emerged in this year’s elections; and in almost every case, they struggled.

So the question remains over the future of pro-lifers in the typically pro-choice party. Will Democrats strategically expand to become a “big tent” on the issue of abortion, or will they double down on a commitment to abortion rights?

The issue is particularly apt for evangelicals, who have long considered abortion a political priority. Recent analysis of the 2016 presidential election indicated that a politician’s stance on abortion matters more than party for Americans with evangelical beliefs; three-quarters of pro-life evangelicals said they’d be willing to “vote for a candidate who was truly pro-life, regardless of political party.”

While Republicans easily offer voters a more consistent pro-life position and lobby to tighten restrictions on abortion access, Democrats who fall outside the typical pro-choice default of their party tend to brand themselves as “pro-life for the whole life,” bringing in positions against capital punishment and for poverty relief as well—issues that can appeal to some Christian voters.

Michael Wear, who conducted faith outreach for the Obama White House and serves as a Democrats for Life board member, suggested that fellow believers are often more excited at the idea of a pro-life Democrat than the candidates themselves.

“I want for Christians to be able to affirm what is good and reject what is bad in both parties. That’s the type of conversation I want to see more of in 2018 and going into 2020,” he told CT in an interview prior to Election Day.

“I don’t want to hear the rhetoric of ‘we don’t have any pro-life Democrats in the party,’ and then we’re doing nothing to support them.”

Two of three senators endorsed by Democrats for Life (who still face criticism from pro-life groups in general) won re-election bids: Joe Manchin in a tight West Virginia race and Bob Casey Jr. in Pennsylvania. But Joe Donnelly, known for his reputation as a “conservative Democrat,” lost in Indiana after Republican Mike Braun jumped on the incumbent’s vote against Trump-nominated Supreme Court Justice Brett Kavanaugh.

And the buzz around a handful of fresh pro-life candidates on the left didn’t result in victories at the polls, either.

The two new congressional challengers backed by Democrats for Life—Dawn Barlow, a doctor and a Church of Christ member in Tennessee, and Tim Bjorkman, a judge and Mennonite Church USA Sunday School teacher in South Dakota—failed to beat their Republican opponents.

Billie Sutton, the “pro-life Democratic cowboy” and lifelong Baptist who ran for governor of South Dakota, also lost his race Tuesday, with 47.6 percent of the vote against Republican challenger Kristi Noem, who received 51 percent. It was the closest a Democrat had come to winning a gubernatorial election in the conservative state in more than three decades.

Despite both candidates’ pro-life records in the state legislature, South Dakota Right to Life had endorsed Noem, citing that the 34-year-old Sutton “has been gentle in his anti-abortion rhetoric and gentle in some of his votes.”

Texas gubernatorial candidate Andrew White, a conservative Democrat who ran as “personally pro-life,” didn’t make it to Election Day after losing his runoff in May. Son of the late former Democratic governor Mark White, he was open about his personal view against abortion, which he told CT he attributes to the Holy Spirit changing his heart on the issue, convicting him over the sanctity of life and how “there are no accidents.”

White saw himself as a unifier, hoping to bring pro-life and pro-choice groups together to reduce abortion, but as a Democrat did not have plans to roll back existing access to abortion in the Lone Star State. His position upset potential supporters on both sides: fellow pro-life Christians at his Presbyterian Church in America (PCA) congregation in Houston, who wanted more restrictive policies, and pro-choice lobbyists, who bristled at his suggestion that abortion could be a bad thing and not just a health care decision.

“The system is built around two extreme philosophies. When you take this moderate view, you make them both angry,” White said. He resigned his position as an elder at Christ the King Presbyterian when his campaign stirred controversy among the congregation. His family still attends the church, but it hasn’t been the same since, he said.

Politicians are expected to take more stark views, especially to win over the support of major pro-life or pro-choice backers. As a result, moderate pro-life Democrats have been on the decline for over a decade. [See years of CT headlines declaring pro-life Dems “ousted” from office and “endangered” in politics.] The number of Democratic representatives with a perfect rating on the National Right to Life Committee’s scorecard has dropped from 17 in 2008 to only 2 in 2018.

Just a year ago, it looked like some top Democrats were ready to embrace certain pro-life candidates. The party didn’t include abortion on a list of midterm focuses and the chair of the Democratic Congressional Campaign Committee (DCCC) said there was “no litmus test” on the issue.

However, the overall shift in the party has moved toward more intense pro-choice rhetoric and positions. During the 2016 campaign, Hillary Clinton proposed overturning the Hyde Amendment’s ban on federal funding for abortion. Pro-choice advocates routinely frame abortion as an issue of reproductive health and female autonomy.

Confining a position against abortion to a candidate’s personal belief rather than policy position (as White had done) “is the new ‘safe, legal, and rare,’” according to Wear.

Even recognizing complicated feelings on the issue can result in party pushback and contempt, as Missouri’s Democratic Party leader learned the hard way this year. Even Dan Lipinski, an incumbent representative from Illinois with a pro-life record, faced opposition from fellow Democrats in the primaries, with the DCCC initially declining to endorse him. Lipinski won re-election by a wide margin in the Chicago area district.

“… [P]olarization triumphed. Abortion became a wedge issue for Republicans and, in reality, a litmus test for Democrats,” lamented Catholic journalist Peter Steinfels in a column for The Washington Post defending pro-lifers on the left.

For the first time in the recent history of the partisan pro-life/pro-choice divide, polls indicate that Democrats are more motivated by the issue of abortion than Republicans.

And yet, the liberal voters who support pro-life policies have not disappeared. According to CNN exit polls taken during Tuesday’s elections, about 1 in 5 voters who want Roe v. Wade overturned are Democrats. Among Christians who believe abortion should be illegal in all or most cases, about 30 percent lean left politically, according to Pew’s massive Religious Landscape Study.

Overall, the pro-life cause had a strong showing on Tuesday. Susan B. Anthony List president Marjorie Dannenfelser called Election Day “a clear victory for the pro-life movement.”

In states where anti-abortion measures were on the ballot, West Virginia voted to pull Medicaid funding for abortion (while Oregon voted against a similar ban), and Alabama recognized the “the sanctity of unborn life and the rights of unborn children” in a constitutional amendment.

As GetReligion highlighted, pro-life Republicans took over Senate seats that used to be held by Democrats in Indiana, North Dakota, and Missouri, giving the party a pro-life majority in the Senate (no longer dependent on precarious votes from pro-choice moderates Susan Collins of Maine and Lisa Murkowski of Alaska).

Meanwhile, the country’s biggest pro-choice groups, including Planned Parenthood and NARAL Pro-Choice America, are gearing up to defend state-level abortion protections against the possibility of a “post-Roe” reality under a Supreme Court with Kavanaugh as an additional conservative justice, The New York Times reported.