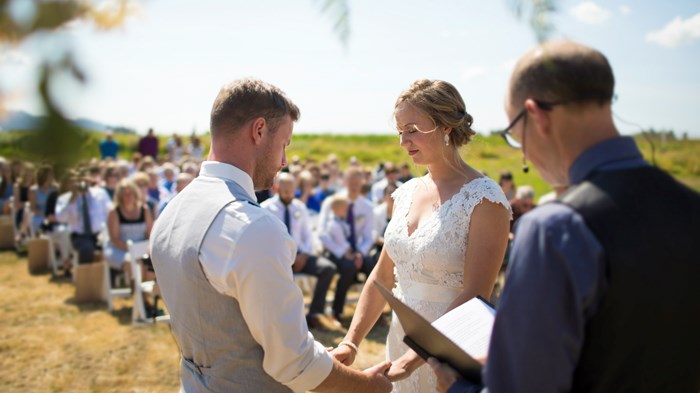 The Universal Life Church Monastery—a top destination for giving friends and family credentials to perform ceremonies—had sued the Volunteer State over the policy, which it said “grants a preference to certain religions” and “burdens its members’ free exercise of religion.”

The law was set to go into effect July 1, but federal judge Waverly Crenshaw decided on Wednesday to allow weddings conducted by online-ordained celebrants to resume until a trial later this year. Officials argued the policy was designed to ensure officiants were responsible enough to perform their duties on behalf of the state.

Unlike most denominations, churches, and religious organizations, nonprofits like the Universal Life Church and American Marriage Ministries exist primarily to ordain the growing number of friends and family members tapped to officiate weddings. Recent surveys show between a quarter and half of US ceremonies are now performed by loved ones rather than traditional ministers.

While Tennessee lawmakers see pastors and religious clergy as beyond the scope of the ban—since they already meet the legal standard of “a considered, deliberate, and responsible act” for ordination—the law could become an issue if churches begin to offer “online ordination as the culmination of online theological training,” according to Jennifer Hawks, associate general counsel at the Baptist Joint Committee for Religious Liberty.

“For now, if the law is upheld, most ordaining organizations will continue to ordain their leaders as they have always done,” she said. “Only those religious groups which do not include an in-person component for their ordinations would have to make changes in order to satisfy the requirements that must be met for private citizens to perform this state function.”

In the US, weddings represent a unique intersection of church and state. The government licenses marriages, in part, to codify the legal benefits and protections afforded to married couples. More than a decade ago, CT reported how Pennsylvania barred online ordination for wedding celebrants, requiring religious officials lead to a “regularly established church or congregation” to qualify. Virginia has similar requirements, asking that religious officiants provide evidence of their role at a gathered congregation and that they are in good standing with their denomination.

But after state and county procedures have long straddled the civil and religious functions of the ceremony, fewer Americans care about the latter, leading to the rise of nontraditional and secular celebrants.

Some Christian leaders have questioned whether the church should be a part of the civil ceremony at all, particularly as same-sex marriage became legal. About a quarter of pastors and a third of Americans said clergy should no longer be involved in state marriage licensing in a 2014 LifeWay Research poll.

“The argument for allowing ministers to solemnize wedding with civil effect is basically an argument of accommodating the wishes and the convenience of the couple. Many people will want their wedding performed by a minister, by a clergy person, and why make them go through a separate ceremony?” said Thomas Berg, law professor and religious freedom expert at University of St. Thomas School of Law in Minnesota.

“If the issue is accommodating the religious desires of the couple, allowing the couple to have that single ceremony, then it does not suggest that the state has a very strong interest in regulating the quality of the minister performing it,” he said in response to Tennessee’s law. “A friend may be more meaningful than anyone else.”

He and other religious liberty experts have suggested that the Universal Life Church has a solid case.

For years, even couples that weren’t active in their faith would refer to their local church when it was time for weddings or funerals. Pastors report that the availability of online ordination and private wedding venues decreased demand for those services.

Plus, many active Christians themselves are drawn to these options; only around 1 in 5 US weddings now takes place in a church, according to a survey by the popular wedding website The Knot. In almost every aspect of the wedding, people are less tied to tradition and ritual, instead preferring the kind of personalization showcased on Pinterest and Instagram, The Atlantic reported recently.

“The trends tell us that couples are not turning to the church to provide ‘marrying’ and ‘burying’ services. When was the last time you attended a wedding in a church sanctuary?” said Byron Weathersbee, co-founder of Legacy Family Ministries and co-author of To Have and To Hold and Before Forever. “Many churches are thankful to be out of the wedding business. In my opinion, this ends up costing them the relational capital to connect that newly married couple with the church.”

Involving married couples in church life is not just good for the church; research shows it’s good for the couple. According to the Institute for Family Studies, regular attenders with active faith lives are less likely to divorce and tend to be more satisfied in their relationships.

“What we're seeing in this trend [of online ordination] is a symptom of the shift away from the importance of the local church. On one hand, it's meaningful to have a friend or family member perform the ceremony because they know us well. But historically, marriage in the church has been just that—in the church,” said Catherine Parks, author of A Christ-Centered Wedding. “We submit to one another as members of a community of faith, and we need those people—pastors, elders, fellow church members—to encourage and hold us accountable in our marriages from the moment they begin.”

But the trend of enlisting friends as marriage officiants could also pose an opportunity for the church.

Scott Kedersha, who directs the marriage and newly married ministries at Watermark Community Church in Dallas, stresses the importance of couples choosing officiants that “communicate a biblical, Christ-centered view of the gospel and marriage,” whether they are a pastor, small group leader, college roommate, or best friend.

While young couples may not be involved enough in a church to feel personally connected to a pastor, “candidly, as long as the gospel is proclaimed and God is honored through the relationship and ceremony, then we can still celebrate the marriage,” he said.

By the Power Vested in Me by God Or the Internet: ...