Charlie and Marty Coe recently celebrated their 50th wedding anniversary in front of a joyful crowd of family and friends, but things weren’t always so good in their marriage. Although they were very much in love in the early years, by the time they reached their early 30s, they had grown “cold and distant” and were “living the life of married singles.” As they put it, they were “a train wreck waiting to happen,” and though they never discussed it, the threat of divorce “loomed large.” At the time, they attended church but were not living out their faith in their marriage.

All that changed about 38 years ago when the couple attended a Worldwide Marriage Encounter (WWME) weekend they heard about through a friend at church. During the event, an unhappy Marty found the courage to tell Charlie he needed to shoulder a much larger share of the care of their two children. The WWME community also jumpstarted their faith and their marriage, prompting them to pray with and for one another on a daily basis and to become more active leaders in their church. Since then, they’ve enjoyed a vibrant marriage that they continue to share about through their marriage ministry.

This couple’s experience is illustrative of some of the key findings from a new report from the Institute for Family Studies (IFS) and the Wheatley Institution, The Ties That Bind. It finds that “lukewarm” couples—those who attend church infrequently—do not enjoy better relationship quality than secular couples who never attend church, and on some measures, such as men’s infidelity and women’s relationship quality, they actually do worse than secular couples. But couples who take their faith seriously, as do Charlie and Marty, are much more likely to be flourishing in their marriages.

The report is based on findings from the 2018 Global Family and Gender Survey (GFGS), a new international survey of over 9,000 men and women in heterosexual unions in 11 countries—including more than 2,000 respondents from the United States.

Overall, The Ties That Bind report finds that regular religious attendance is linked to higher-quality relationships in its 11-country sample. In the United States, for instance, data from the GFGS indicate that 67% of highly religious wives enjoy above-average relationships compared to 44% of wives in less/mixed religious marriages and 53% of wives in secular relationships. 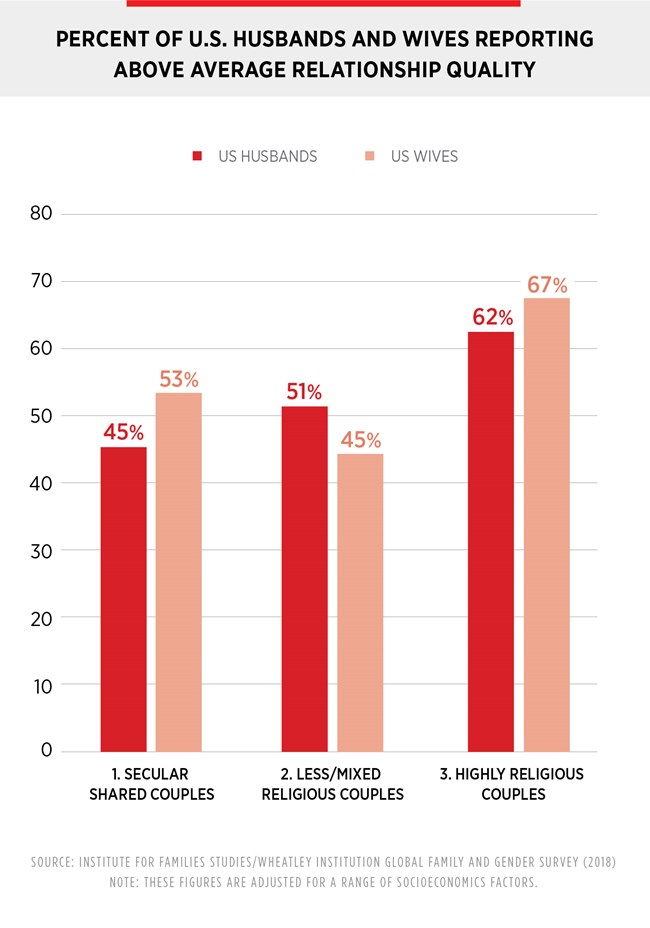 A similar story emerged for sexual satisfaction. Religious husbands and wives in the US report the highest levels of being “strongly satisfied” with their sexual relationship. In fact, wives in highly religious marriages are about 50% more likely to report being strongly satisfied in their sex lives than their secular and less religious counterparts. Religious wives are also significantly less likely to report infidelity compared to other wives in America. 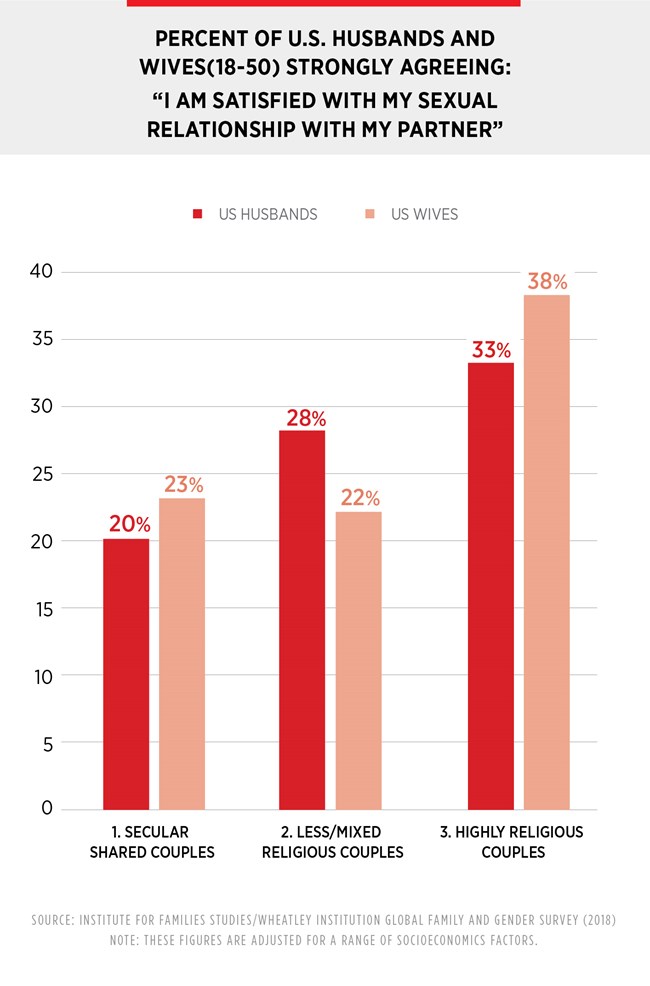 Men and women of faith are not immune to domestic violence. Consider the story of William and Lacy Sullivan (not their real names). The Sullivans present well in public—always in church on Sundays, active in church ministries, and with kids in Christian schools. But behind closed doors, the Sullivans’ relationship is marred by infrequent but volcanic expressions of anger—screaming, hitting, and the like—that brings fear and trepidation to their children and corrodes their marriage.

The Ties That Bind report looks at the prevalence of an expansive set of four measures of IPV—physical violence, sexual violence, threats, and controlling behavior—among the religious and less religious couples in the GFGS. The survey asked men and women whether they had been victims (women) or perpetrators (for men) of such IPV in their current relationship (about 20 percent of both men and women in the overall sample reported IPV).

Previous research has found that churchgoing is linked to less domestic violence in the United States. However, this international report did not find a significant difference between highly religious and less religious couples when it comes to IPV in our 11-country sample or in the United States. While highly religious men and women in our sample are not more likely to report being victims or perpetrators of IPV, they are no less likely to report IPV, either. Religious practice, it would seem, is not a protective factor against the more expansive definition of IPV—hitting, threats, controlling behavior, etc.—measured in this new study.

In understanding these findings, it’s important to emphasize that highly religious couples are not more prone to violent and controlling behavior in their relationships than other couples. This conclusion runs counter to claims by some academics and members of the mainstream media, as Wilcox has previously written for CT. Nonetheless, church attendance doesn’t seem to have a protective effect on this expanded definition of IPV, and the research doesn’t indicate why, exactly, that might be.

Although the conclusions are complicated, our report offers a sobering reminder that faith alone does not eliminate the risk of IPV inside families across the United States and around the world. Accordingly, clergy and lay leaders might view this study as an added encouragement to seek training on IPV, speak the truth about relationships, and come alongside victims and potential victims in their congregations who are often suffering in silence.

As the authors of the IFS/Wheatley Institution report state, the church is still a place where “family-friendly norms and networks … reinforce the ties that bind,” as evidenced by higher relationship quality and sexual satisfaction among religious couples in the US and 10 other countries. But the challenge facing churches is how to “build on those strengths to address families who are struggling”—especially those experiencing domestic violence and other toxic relationship behaviors.