Some evangelical supporters consider the shift away from Christian charities a betrayal.
David Roach|November 18, 2019 01:47 PM 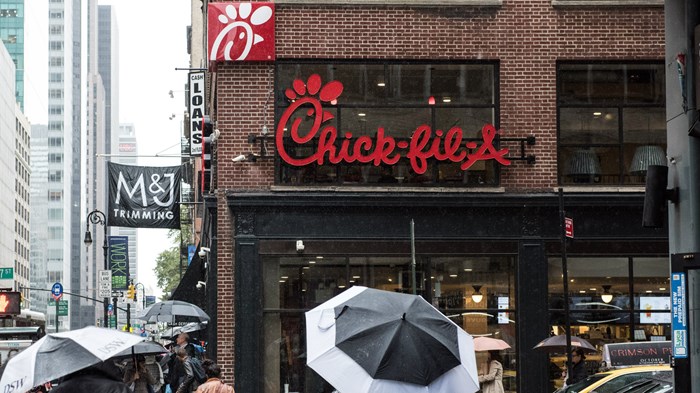 Chick-fil-A has announced plans to end charitable giving to Christian organizations—including the Salvation Army and the Fellowship of Christian Athletes (FCA)—amid concern over LGBT backlash as the popular Christian-owned business expands beyond the US.

The strategic shift has disappointed evangelicals who admired the chain’s stance and leaders at Salvation Army, who say its outreach supports members of the LGBT population facing homelessness and poverty.

“There’s no question we know that, as we go into new markets, we need to be clear about who we are,” Chick-fil-A President and Chief Operating Officer Tim Tassopoulos told the site Bisnow on Monday. “There are lots of articles and newscasts about Chick-fil-A, and we thought we needed to be clear about our message.”

Chick-fil-A—the country’s third largest fast-food chain, behind McDonald’s and Starbucks—has been blocked from opening new locations in the San Antonio and Buffalo airports this year over criticism for donating to organizations with a traditional Christian view of sexuality. Previously, it has faced resistance for the same reason from politicians in Boston, San Francisco, and Chicago.

Internationally, a shopping center in Reading, England, announced eight days into Chick-fil-A’s lease on a new location that the lease would not be renewed when it expired. The mall cited a desire to “offer an inclusive space where everyone is welcome.”

An unnamed Chick-fil-A executive told Biznow the chain was “taking it on the chin” in media reports about LGBT protests and could not ignore the threat to its growth.

Several years ago, the restaurant chain stopped giving to some organizations that oppose same-sex marriage, like the Family Research Council, but continued to support groups like FCA and Salvation Army, which are not focused on political action. Going forward, it will end multiyear commitments to both charities after donating $1.65 million to FCA and $115,000 to the Salvation Army in 2018, according to tax forms.

The Salvation Army, the Christian denomination now better known as one of the biggest charities in the US, told Christianity Today it is “saddened to learn that a corporate partner has felt it necessary to divert funding to other hunger, education and homelessness organizations—areas in which The Salvation Army, as the largest social services provider in the world, is already fully committed.”

The Salvation Army brings in $4.3 billion in revenue annually and says it does not discriminate against the LGBT community in its programs, services, and hiring. Officers in the Salvation Army, who are ordained as ministers, are asked to comply with its theological teachings on sexuality.

“We serve more than 23 million individuals a year, including those in the LGBTQ+ community,” the Salvation Army stated. “In fact, we believe we are the largest provider of poverty relief to the LGBTQ+ population. When misinformation is perpetuated without fact, our ability to serve those in need, regardless of sexual orientation, gender identity, religion or any other factor, is at risk. We urge the public to seek the truth before rushing to ill-informed judgment and greatly appreciate those partners and donors who ensure that anyone who needs our help feels safe and comfortable to come through our doors.”

FCA did not respond to CT’s request for comment. According to its own report, FCA brought in $141 million in 2018, but financial support from foundations like Chick-fil-A’s make up just 14 percent of its donations. The FCA asks leaders to sign a purity statement, committing to avoid homosexual activity and sex outside of marriage.

For years, evangelicals in particular have appreciated the Christian identity and values espoused by the popular closed-on-Sunday restaurant chain, founded by the late Truett Cathy, a faithful Baptist. In a brand study by Morning Consult, 62 percent of evangelicals said Chick-fil-A had a positive impact on their community, compared to 48 percent of Americans on average.

Conservative politician and commentator Mike Huckabee, who organized a campaign to support Chick-Fil-A amid pushback from LGBT advocates in 2012, said “Today, @Chickfila betrayed loyal customers for $$. I regret believing they would stay true to convictions of founder Truett Cathey [sic]. Sad.”

Columnist Rod Dreher wrote, “I love Chick-fil-A, but it’s going to be a while before I go there again. This is nothing but gutless surrender.” Wheaton College professor Ed Stetzer tweeted, “Biblical orthodoxy matters—and biblical orthodoxy increasingly has a cost in #America2019.”

The chain’s mission statement, established by Cathy, is “to glorify God by being a faithful steward of all that is entrusted to us. To have a positive influence on all who come in contact with Chick-fil-A.”

Tassopoulos, the current president and COO, told Bisnow that the foundation will be open to partnering with faith-based charities in the future, but that “none of the organizations have anti-LGBT positions.”

He said the shift in giving is “just the right thing to do: to be clear, caring and supportive, and do it in the community.”