We’re called to offer our thanksgiving in all circumstances—but we're especially likely to when it’s a national holiday.
Kate Shellnutt|November 27, 2019 08:00 AM 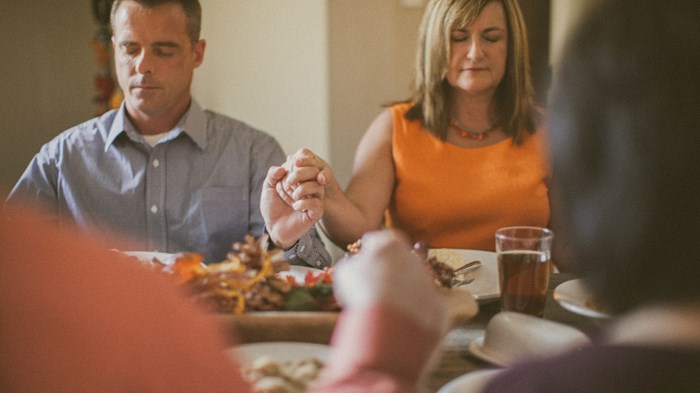 When President Abraham Lincoln made Thanksgiving celebrations official in the US he directed the country to “gratefully acknowledge” God and offer “a day of Thanksgiving and Praise to our beneficent Father.” Most of the US continues to direct their thankfulness toward God (around 63% according a LifeWay survey), and a favorite hymn and Bible verse have become part of the tradition.

1 Thessalonians 5:18—“Give thanks in all circumstances; for this is God’s will for you in Christ Jesus”—is the most popular Thanksgiving Bible verse on Bible Gateway. It’s the most-favorited and most-shared verse on thankfulness each year on the US holiday, held the fourth Thursday in November.

John Wesley described this passage, completing a trio of commands to “Rejoice always, pray continually, give thanks in all circumstances” (1 Thess. 5:16–18), as “Christian perfection.” He said:

Further than this we cannot go; and we need not stop short of it …Thanksgiving is inseparable from true prayer; it is almost essentially connected with it. He that always prays is ever giving praise, whether in ease or pain, both for prosperity and for the greatest adversity. He blesses God for all things, looks on them as coming from him, and receives them only for his sake; not choosing nor refusing, liking nor disliking, anything, but only as it is agreeable or disagreeable to his perfect will.

The most-sung Thanksgiving hymn is “Give Thanks” by Henry Smith, with the familiar line, “Give thanks with a grateful heart,” according to data from Faithlife Music, based on lyrics displayed by churches in worship. It is also the most popular song with the theme of “thankfulness” in the SongSelect directory by Christian Copyright Licensing International (CCLI).

Smith wrote the song in 1978 to sing with his own congregation in Virginia, not realizing until nearly a decade later that it had spread to Europe and been released in the US under the Hosanna! Music label. “Give Thanks” was the title song for praise singer Don Moen’s 1986 album and went on to be recorded in several languages including Russian, Afrikaans, and Swedish. Smith was soon credited as the writer, and his Thanksgiving song has appeared on multiple best-of worship compilations.

While gratitude is a common theme in Scripture, Americans pay particular attention to the topic around Thanksgiving and Christmas. Thanksgiving is the only time Bible Gateway sees searches spike for terms like gratitude, give thanks, thankfulness, and thanksgiving.

Besides 1 Thessalonians 5:18, which is by far the top Thanksgiving verse, other popular selections include:

Faithlife reports that popular worship songs about blessings also rank among the most-played, behind “Give Thanks,” including “10,000 Reasons (Bless the Lord)” and “Blessed Be Your Name” by Matt Redman; the hymns “Great is Thy Faithfulness” and “Count Your Blessings”; and “Forever” by Kari Jobe.

The CCLI thankfulness rankings add Bethel Music’s “The Goodness of God,” as well as “Here I Am to Worship” and “Thank You Lord.”