A Few Churches Are Defying Bans on Large Gatherings. That Could Be Bad for Religious Liberty.

Experts warn that grandstanding will make it harder to defend against real threats.
Daniel Silliman|April 7, 2020 11:00 AM 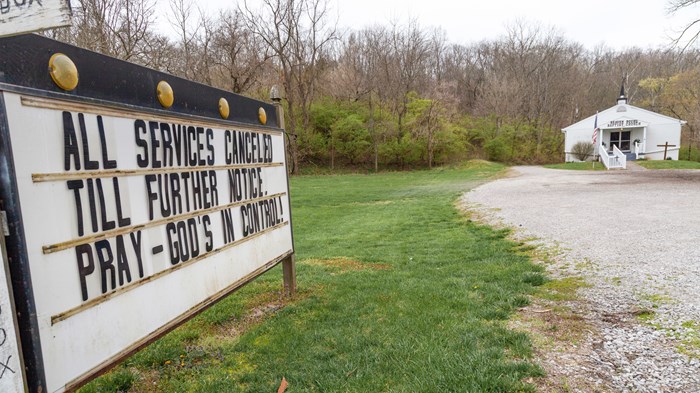 Ninety-three percent of Protestant churches are closed in America, for fear of spreading COVID-19. Religious liberty advocates are worried about the other seven percent.

The few churches touting First Amendment freedom while defying emergency stay-at-home orders may do lasting damage to the arguments for religious liberty, according to experts like Luke Goodrich, senior counsel with the Becket Fund for Religious Liberty.

“We have to be able to distinguish between real threats and mere shadows,” Goodrich said. “Stoking conflict and grandstanding about things that aren’t real threats isn’t helpful. It’s like crying wolf. It deadens society to the real religious conflicts that are at hand.”

Goodrich has a robust view of religious liberty. He believes that even unpopular minorities should be allowed to practice their faith free from government intrusion and has made the argument successfully to the Supreme Court in some of the most important cases of the last few years. Goodrich defended a religious prisoner’s right to grow a beard, a religious school’s right to fire a sick teacher, and a religious company’s right not to provide its employees with insurance that covers some forms of birth control.

But he doesn’t see the argument for churches’ right to hold worship services in a pandemic.

“Legally, the issues are not that complex,” Goodrich said. “Every constitutional right has limits, and the right of religious freedom doesn’t mean you can harm your neighbors.”

The law varies from state to state, but even the strongest protections of religious practice allow for some restrictions. If the government isn’t targeting religious groups, has a legitimate reason for the law, and doesn’t impose a heavier burden than it has to, then it can restrict people’s right to practice their faith.

Stopping a pandemic is a clear government interest, and public officials around the globe have warned that churches can be hot spots for the spread of COVID-19. Major outbreaks in South Korea and France have been traced back to church meetings. And in the United States, they’ve been linked to a choir practice in Washington state, a Pentecostal church in California, and church funerals in Georgia.

Currently, 45 states have instituted stay-at-home, safer-at-home, and shelter-in-place orders, which ban large gatherings of people. Some exempt religious gatherings, but most do not. The majority of white evangelicals support this. The American Enterprise Institute found that 72 percent—along with 71 percent of Hispanic Catholics, 74 percent of black Protestants, 76 percent of white Catholics, and 80 percent of white mainline Protestants—don’t think there should be religious exemptions to the emergency public health orders.

And most of the people who don’t think religious organizations should be required to close their doors are still willing to do it voluntarily. A LifeWay Christian Resources Survey found that by March 29, all but 7 percent of Protestant churches had stopped in-person meetings.

The minority who disagree, however, are loud. They’re good at grabbing attention. And they’re claiming religious liberty arguments as their own.

A Oneness Pentecostal pastor in Louisiana defied the state’s ban on large gatherings and said, “We hold our religious rights dear, and we are going to assemble no matter what someone says.”

Three churches in Texas filed a lawsuit alleging a county order banning large gatherings is unconstitutional. “The circumstances presented by coronavirus do not excuse unlawful government infringements upon freedom,” the lawsuit states. “The free exercise of religion cannot be taken lightly and should not be sacrificed at the altar of political expediency.”

In Florida, a pastor of a charismatic church was arrested for holding services that allegedly violated a county stay-at-home order. Rodney Howard-Browne, a strong supporter of President Donald Trump and a revivalist known for promoting uncontrolled laugher as a sign of the presence of the Holy Spirit, is fighting the misdemeanor charges in court and filing a federal lawsuit claiming the arrest was a violation of his religious liberty.

If these people become the face of the argument for religious liberty, that could change public perception of the legitimacy of legal protections for religious practice, said John Inazu, a law professor at Washington University in St. Louis.

“To put an unsympathetic plaintiff at the forefront of a case, it shifts the cultural and national debate,” said Inazu, who wrote an academic book on the right of assembly. “This will represent Christianity for many, many people. Most people aren’t going to be able to say, ‘That’s just one guy in Florida.’ They’ll say, ‘That’s what Christians do. They prioritize their own gatherings instead of loving their neighbors.’”

Whether they’re sympathetic public figures or not, though, these churches think they do have a legal argument.

Jared Woodfill, the attorney suing on behalf of three Texas churches, said the stay-at-home orders set a dangerous precedent: If the government can shut down churches because of the coronavirus, what’s to say it won’t shut down churches during flu season?

Mat Staver, who co-founded Liberty Counsel with his wife Anita Staver and is representing Howard-Browne in Florida, shared Woodfill’s concern. He points out that the stay-at-home orders include lots of exemptions for “essential” services. In different states, these can include hardware stores, abortion providers, and marijuana dispensaries. Who gave the government this power to decide what’s essential?

“They shut the churches and leave open the hardware store, where people can buy potted plants and hoses,” he said. “Those are essential, but a church that functions beyond its walls and can’t be contained in an online service isn’t essential? That’s a problem. When literally one person, a governor or a county commissioner, can shut down a church by just using the word ‘essential,’ that’s a problem.”

Staver argues that Howard-Browne’s church actually didn’t violate the stay-at-home order, but followed all the precautionary measures put in place by the county, setting up hand-sanitization stations and moving chairs so people wouldn’t sit next to each other. But Staver says even if the church did break the public health order, it was unconstitutional.

The county could have exempted churches from the ban. Some states have done that. Some counties in Florida have too. That means there were “less restrictive means” to accomplish the legitimate aim of lessening the impact of a pandemic, Staver said, and that means the rule was a violation of religious liberty.

“There’s definitely a precedent we should be worried about,” he said.

People who are normally very concerned about religious liberty are unpersuaded by these arguments, however. They don’t think the responses to the pandemic are setting a precedent for future restrictions, or represent a dramatic expansion of government power.

Travis Wussow, vice president for public policy at the Ethics and Religious Liberty Commission of the Southern Baptist Convention, said that even if some public officials have been more aggressive than they needed to be or made seemingly sweeping statements about the power to shut down churches, this isn’t cause for concern.

“These are extraordinary times,” Wussow said. “Everybody in this country is trying to figure out—in their own way and in good faith—how to make it through this crisis.”

And a government’s error in judgment can be corrected in the courts. A church’s error, on the other hand, can do lasting damage to Christianity’s public witness.

“As a Christian, I am concerned when people of faith are seen as being more about power and publicity than loving their neighbors,” Goodrich said. “It can harden people against the gospel.”

The churches defying stay-at-home orders are outliers. But in the end, that may not matter, because the arguments they are making don’t sound different than the arguments in other high-profile religious liberty cases. And the Christians in these cases are hard to distinguish from the other 93 percent.

A Few Churches Are Defying Bans on Large Gatherings. That Could Be Bad for Religious Liberty.

A Few Churches Are Defying Bans on Large ...