One of the country’s top charities has added millions of meals and shelter beds despite a COVID-19 fundraising crunch.
Megan Fowler|August 24, 2020 08:00 AM 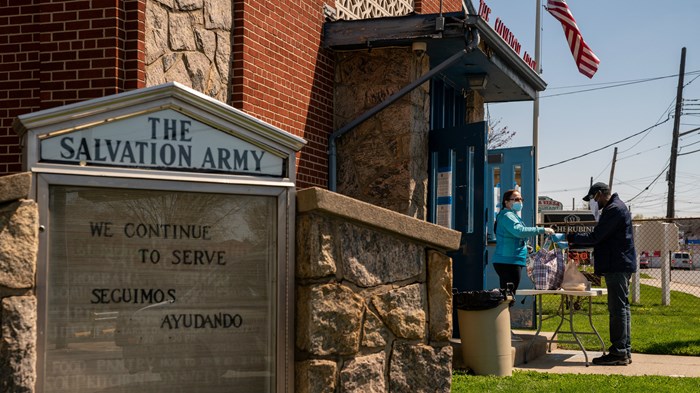 Salvation Army Commissioner Kenneth Hodder had simple orders for its leaders responding to the crisis of COVID-19: Do what needs to be done, and do it in Christ’s name.

One of the biggest and best-known charities in the country, the Salvation Army is working overtime to meet the basic needs of millions of Americans facing unemployment at levels not seen since the Great Depression.

It has distributed 70 million meals since March, 20 million more than were distributed in all of 2019 and at 12 times the rate at which the organization distributed food after Hurricane Katrina.

The Salvation Army, which has operated in the United States since 1880, has also provided nearly 1.5 million additional nights of shelter for people facing homelessness because of COVID-19, on top of the nearly 9 million nights of shelter it provides annually.

Hodder led the church and relief agency’s California-based Western District before taking command of the US National Headquarters in July. The sheer scope of the country’s current needs is staggering, even for an organization experienced in responding to natural disasters.

He wants regional and local leaders to have the flexibility to adapt their programs based on the circumstances in their community, ensuring their work in all areas reflects God’s holistic care for people. Food, shelter, and emotional support represent the biggest needs the Salvation Army strives to meet, and providing relief looks different in each community.

Social distancing and stay-at-home orders have forced the Salvation Army to idle some of its programs, like support groups for senior citizens and athletic programs for kids. But other ministries have been rapidly scaled up.

At the Sherman Avenue Corps in Washington, DC, a food distribution program has grown from 75 meal boxes each month to 200 each week—half of them delivered by volunteers to residents who cannot leave their homes.

The Salvation Army has responded to 800,000 requests for spiritual and emotional support with a hotline, Zoom meetings, and Facebook Live services, on top of meal deliveries and shelter rooms.

“People need to know right now that they are cared about, seen, and understood. That’s one thing that I think the Salvation Army does very well,” Hodder said. “We are not only meeting physical needs, but helping people sense what Scripture makes clear, that they are loved, and God is there in the midst of these difficult moments.”

Hodder, a sixth-generation Salvationist and a second-generation National Commander, takes the helm in the midst of ongoing challenges.

At the start of the economic downturn earlier this year, some who typically donated to the Salvation Army were turning to the agency for help. The urgent demand prompted the centers to purchase food rather than waiting for donations.

While the Salvation Army hasn’t calculated the impact on its revenue streams, the increased needs combined with canceled fundraisers and the temporary closure of Salvation Army Thrift Stores during lockdown—a reliable source for $600 million in sales annually—will leave the agency strapped for cash.

But Americans have been generous. Donations during the first five months of the pandemic increased 238 percent over the same period in 2019. Still, the uptick will not make up for the losses so far this year. Bringing in $2 billion in donations, the Salvation Army is the 4th largest charity in the US, according to Forbes charity rankings.

Last year, Chick-fil-A ended its charitable donations to the Salvation Army following its own controversy over LGBT issue. That riled up some public antagonism against the organization for its stance on marriage and sexuality for its church leaders, who are called officers.

“The Salvation Army services have always been available to members of the LGBT community, and they always will be, regardless of one's race, sex, religion, identity, or orientation,” Hodder said. “The only requirement for services of the Salvation Army is our capacity to help.”

Hodder believes the Salvation Army’s reputation is unearned. Working in California, Hodder forged partnerships with members of the LGBT community, determined to open the lines of communication and demonstrate that the Salvation Army takes seriously its mission to serve without discrimination.

In San Francisco, for example, the Salvation Army formed a partnership with Bay Area Rapid Transit (BART), using funds collected through red kettles in BART stations to pay for support services to those who seek shelter in the metro system’s shelters and trains. To make the partnership work, Hodder had to work closely with LGBT people in BART leadership and reassure them the Salvation Army is ready and willing to assist anyone in need.

When the pandemic struck, Major Darren Norton, the divisional commander based in San Francisco, reached out to the City of San Francisco to offer assistance. Since April, the relief organization has delivered 1,400 meals each day to 51 tent encampments around the city and to three “safe sleeping sites” set up by city officials.

“We were able to talk with people, pray with people, and give people words of assurance: ‘We’ll be back tomorrow; you don’t need to go searching for meals,” Major Darren Norton said.

When he considers the challenges facing the Salvation Army—particularly uncertainty about funding—Hodder asks the Lord to give the organization the resources to meet the needs it knows about. The needs are great, but he believes the organization can rise to meet them.

“I pray that I would be wise, and that every Salvation Army officer in the communities in which he or she serves would have the wisdom to serve in their communities and that the kindness that Christ had would characterize our service.”