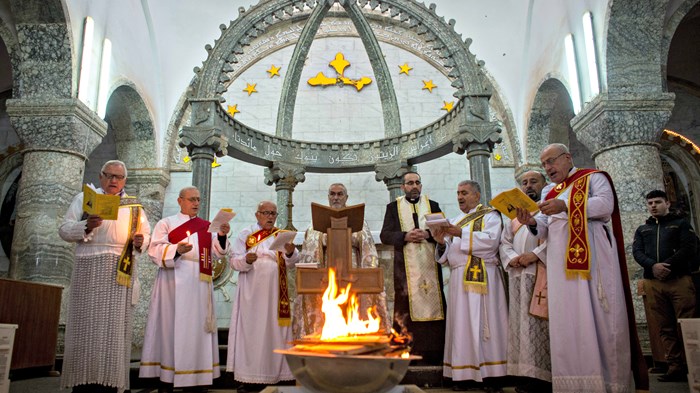 Seventeen years since the fall of Saddam Hussein, the fractious Iraqi nation—divided mostly between Sunni, Shiite, and Kurdish Muslims—remains unable to agree on a national day.

But they can agree on Christmas.

“Today Christmas is truly a celebration for all Iraqis,” said Basilio Yaldo, bishop of Baghdad and Sako’s close associate. “This is a message of great value and hope.”

In 2008, the government declared Christmas a “one-time holiday.”

In 2018, the parliament amended the law to make Christmas for all citizens.

But after each occasion, it was not renewed.

“The declaration is beautiful, but it is very late,” said Ashur Eskrya, president of the Assyrian Aid Society–Iraq.

“But our trouble is not in holidays, it is in the situation of our people.”

The Christian population of Iraq numbered roughly 1.4 million prior to the US invasion. Today, following years of war and the ISIS insurgency, Christians are estimated at less than 250,000.

Land appropriation continues in the Nineveh Plains, Eskrya said. And Christians suffer with all Iraqis the deterioration of the economy amid COVID-19 restrictions.

Christian Iraqis were always allowed to celebrate Christmas themselves, he said. Those who worked for the government received two days off—and three for Easter.

Eskrya lives in Dohuk, in the Kurdistan Autonomous Region, in northern Iraq. Home to the majority of Iraqi Christians, since 2003 it has similarly sometimes given Christmas as a holiday for all. But decorations fill city streets and local malls, he said, while the government provides Assyrian Christians an additional seven religious and ethnic holidays.

But the Kurds are one reason Iraq cannot settle on a singular national holiday. The nation achieved independence from Great Britain on October 3, 1932, but this coincides with a day of mourning over a Kurdish icon who defied Saddam Hussein.

The dictator’s overthrow has also been proposed as a national day, but is too divisive a date within Iraqi politics. Even Ramadan divides Iraqi Muslims: Sunnis follow the Saudi Arabian designation, Eskrya said, while Shiites follow Iran.

Symbolic also is the lack of a national anthem, as Iraq’s failure to develop a coherent identity has hurt the Christian community.

Ara Badalian, pastor of the National Baptist Church in Baghdad, called the Christmas declaration “a great achievement” that emphasizes the Christian component of society.

“I hope it will be accompanied by helping the tiny minority of Christians to remain in Iraq,” he said. “[The government] must rebuild their damaged homes, and provide them with protection.”

The protests, however, led to the appointment of a reformist prime minister, Mustafa al-Kadhimi, who promised Sako he would help ensure the safe return of Christian refugees.

The government may have had an incentive in prioritizing Christmas.

Earlier this month, Pope Francis announced his first trip in the wake of COVID-19 will take him to “the plains of Ur, linked to the memory of Abraham.”

The 84-year-old would become the first pontiff to visit Iraq, pandemic conditions permitting.

“An insistent thought accompanies me when I think about Iraq,” stated Francis in June 2019, when he first announced his intention.

“I want to go … so that it can look to the future through peaceful and shared participation in the construction of the common good.”

Sako called the Christmas designation “one of the first fruits,” and hopes more will follow.

“Everyone in Iraq, Christians and Muslims, esteem [Pope Francis] for his simplicity and nearness,” Sako said.

“His words … are those of a shepherd. He is a man who brings peace.”

A primary reason for the visit is encouragement, wrote Rifaat Bader of the Catholic Center for Studies and Media, based in neighboring Jordan. In Kurdistan’s Erbil, the pope will visit Christians who fled from ISIS. And going to Mosul and Qaraqosh in the Nineveh Plains, he hopes to inspire them—and those abroad—to return to their ancestral home.

“The government can do nothing to get the people to return home,” he said, emphasizing the need for a culture of respect for Christians as indigenous citizens.

“One holiday, and one visit, will not change things.”

Nonetheless, areas of Baghdad have already been decorated for Christmas. A 16-foot tree stands in one mixed-faith neighborhood, overlooking the Tigris River.

St. George Church, the only Anglican congregation remaining in Iraq, will have a socially distanced holiday.

“Christians who stayed in Iraq celebrate a Christmas filled with challenges—but also with joy, as the angels told the shepherds,” said Faiz Jerjes, the parish priest.

“Exactly the same as when Christ was born.”