(UPDATED) More than 1 million ask government to ban Shincheonji, an apocalyptic Christian sect linked to half of infections.
J. Y. Lee|February 28, 2020 10:28 AM 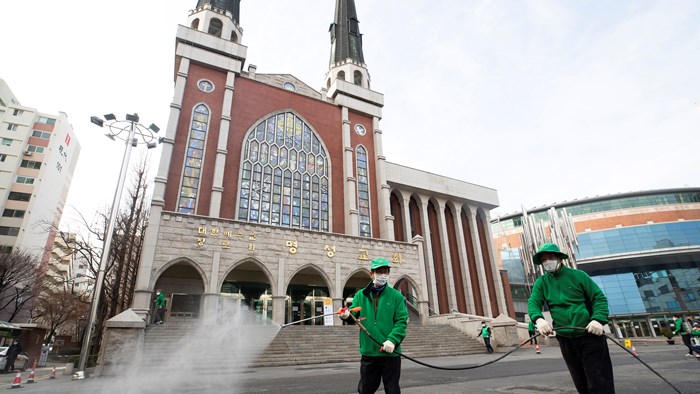 Image: Yun Dong-jin / AP Images
Myungsung Church in Seoul was one of many churches across South Korea to close its Sunday worship services due to the coronavirus outbreak.

Although March 1 usually marks one of the most joyous services in South Korea, in celebration of Independence Movement Day, an unprecedented number of churches will be closed Sunday in response to an escalating coronavirus outbreak now second in scale only to China.

“This is the first time that churches are officially postponing services in the 100 years of Protestant history and 200 years of Catholic history [in Korea],” said Won Jae-chun, a professor at Christian Handong Global University in Pohang. “Services and masses have not stopped—even during the Korean War.”

The world’s largest church, Seoul’s Pentecostal Yoido Full Gospel, announced it will broadcast its services behind closed doors to its half a million members. Other megachurches in Seoul with over 50,000 members that are broadcasting services include Sarang, Onnuri, and Myungsung, where one associate pastor has a confirmed case of coronavirus.

Although the Korean government and many denominations have discouraged public worship, as even military drills and political protests—common facets of life in Korea—have been canceled, the decision whether to hold public worship has been left up to each church.

COVID-19 has infected more than 3,700 and caused 18 deaths in Korea [as of March 1] since the first reported case on January 20. Worldwide, almost 88,000 cases and 3,000 deaths have been confirmed across dozens of countries, with the vast majority in China’s Hubei province where the disease originated in the city of Wuhan.

This week, the US State Department issued a warning against non-essential travel to Korea. “Americans [in Korea] that I know are mostly trying to not panic,” said Kurt Esslinger, an American Presbyterian Mission coworker based in Seoul. “There is a lot of anxiety right now among all Koreans.”

More than half of the 500 respondents to a survey of the Ministry Data Institute, supported by the Presbyterian Church of Korea (Tonghap) and many Korean megachurches, stated they did not attend a worship service last Sunday because of coronavirus. About two-thirds of those who did not attend service said they worshiped at home, and more than half of those said they worshiped through their church websites or watched one of several 24-hour Christian channels in Korea.

“The number of churches who are turning to online or family worship are increasing over the last two weeks,” said Choi Kyu-hee at the National Council of Churches in Korea. “For churches that are still holding worship, some are measuring temperatures of worshipers at the entrance and requiring masks and hand disinfectants.”

At the epicenter of Korea’s outbreak, with 2,100 cases confirmed [as of March 1] and the Korean Centers for Disease Control and Prevention predicting hundreds more, has been a religious movement called Shincheonji, whose 88-year-old founder Lee Man-hee claims to be the second coming of Jesus Christ. A Shincheonji congregation in Daegu, 150 miles southeast of Seoul, has been closely linked with the coronavirus’s spread, and the city of Daegu has filed a lawsuit against the sect for falsifying its number of followers in responding to the government.

In one week, more than 1 million people have signed an online petition to President Moon Jae-in’s office calling for Shincheonji to be dissolved. (An official response by the Blue House is required for any petition that gathers more than 200,000 signatures in 30 days.)

Most evangelical Christians in Korea widely shun Shincheonji’s 200,000-plus followers as heretics, and posters prohibiting Shincheonji members from poaching evangelical members are common in Korean churches. “Our members have beloved friends and family who got sucked into the cult [of Shincheonji], and so negative sentiment towards them is nothing new,” said Lee Won-joon, associate pastor at Sarang Church. “But anger certainly has intensified over the last month.”

Onchun Church in Busan, Korea’s second-largest city, announced it was “investigating the possibility of Shincheonji’s infiltrating into our church” after it closed following the first confirmed case of coronavirus among its parishioners on February 21. The church, located 60 miles southeast of Taegu and belonging to the conservative Kosin Presbyterian denomination, held an emergency elders’ meeting and has cooperated with health authorities since then. Nevertheless, COVID-19 cases traced to Onchun have hit 32, about half of all cases in the city of 3.5 million people.

“Church closures have been rare in Korea, because Korean churches have emphasized observing the Sabbath and tithing as marks of faith based on the Westminster Confession of faith,” said church historian Chang Dong-min. “Until a generation ago, commercial activities and entertainment on Sunday were banned.”

In a letter announcing the closure of Onnuri Community Church from February 26 to March 14, senior pastor Lee Jae-hoon acknowledged the seriousness of such a decision:

Historically for the Korean Church, the Holy Sabbath was a very important religious standard, and there were some predecessors of our faith who suffered greatly to keep it. Some even went to great lengths to escape from oppressive regimes, while others were happy to suffer social disadvantages for the sake of keeping the Holy Sabbath. Thus, this decision may be seen by some as spiritual degradation or worldly compromise. It is very painful and sad to be unable to gather for worship on Sunday. It is a sadness that we can all relate to as we see, an elder from a church in Daegu on the news, in tears as he could not worship at church on a Sunday for the first time in his life.

“If the church can help stop the outbreak of this disease faster by temporarily suspending worship gatherings and meetings, I believe that this is God’s will and pleasing to Him,” the Onnuri senior pastor wrote. “In these increasingly challenging times, I hope that [Onnuri members] will take the lead in overcoming this crisis through intercession, encouragement, and prayer; and refraining from the language of accusation and condemnation.”

Meanwhile, some megachurches and denominations have taken initiatives to alleviate coronavirus. Yoido has donated medical supplies worth about $1 million to Daegu. The Presbyterian Church of Korea (Tonghap) donated 110,000 sets of masks, while Sarang sent 10,000 sanitizing kits and 10,000 medical masks to Daegu.

Sarang pastor Lee Won-joon said, “I am praying that, by the time the virus outbreak winds down, Korean Christians would have a deeper appreciation for mutual fellowship, corporate worship, and the eternal hope we share in Christ.”