Montenegro’s Orthodox and evangelicals debate if new religion law is a blessing or a church-stealing curse.
Jayson Casper|February 4, 2020 11:02 AM 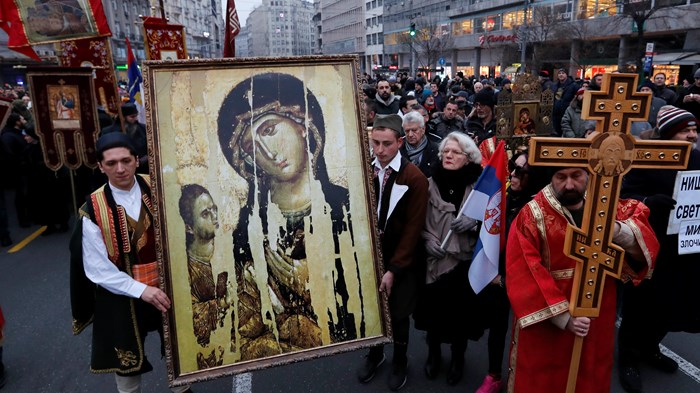 Deep within the Orthodox heartlands of the Balkans, one might expect local evangelicals to celebrate the passage of Montenegro’s first religious freedom law.

Instead, as tens of thousands fill the streets to protest against it, the relative handful of believers find themselves on the sideline of a struggle between giants.

And the stakes could further shake the greater Orthodox world.

Europe’s 6th-least evangelical country is also one of its newer nations. Having achieved independence from Serbia in 2006 through a tightly contested referendum, Montenegro is now seeking autocephaly—spiritual independence—for its local Orthodox church, viewed as a schism by the Serbian Orthodox.

Protests have erupted in Belgrade also, with thousands rallying last month against Serbian “suffering” in Montenegro and other neighboring nations. Crosses, icons, and church banners peppered the demonstrations.

But in Montenegro, rather than waiting for a liberating tomos (decree) similar to the one issued to Ukraine by Archbishop Bartholomew of Constantinople, who is the ecumenical patriarch for Eastern Orthodox communities, the government is acting to register all of its religious communities.

The protesting ethnic Serbian citizens of Montenegro fear the religious freedom law is nothing but a trojan horse for an elaborate ecclesiastic land grab targeting Serbian Orthodox Church properties.

“The law is a step forward, as it helps us ‘small religious communities’ have a legal basis to operate,” said Sinisa Nadazdin, pastor of Gospel of Jesus Christ Church located in the capital city of Podgorica and one of the nation’s five registered evangelical churches.

“But none of us want to enjoy this benefit if it will create in Montenegro a divided population, political instability, or potential violence.”

The law passed 45–0 in parliament, as the 33-member Serb-led Democratic Front boycotted the vote. Several MPs rioted within the chamber, and 17 were detained.

Church-led protests have been mostly peaceful, but Serbian Orthodox officials stated Bishop Metodije of Diokleia was assaulted by police.

“Do not expect us to go peacefully,” Bishop Joanikije of Budimlja-Niksic stated. “We will not arm ourselves, but we will defend our property with our very lives.

“When it comes to that, there are no rules.”

The essential features of the law, published by the Ministry for Human and Minority Rights, guarantee the right to change religion, to establish religious schools above the elementary level, and to conscientiously object from military service.

But its final provisions for property registration fuel the accusations that the law targets the Serbian Orthodox.

Any land or buildings used for religious purposes prior to 1918 that do not have evidence of ownership will constitute state property as a cultural heritage of Montenegro.

Constantine, the fourth-century Roman emperor who issued the religious freedom–granting Edict of Milan, was born in modern-day Serbia. Southern Slavs, however, did not officially adopt Christianity until the ninth century.

The Serbian Orthodox Church was recognized as autocephalous in 1219, and it claims Montenegro was included within its territory.

Gains and losses in the Balkans by the Muslim Ottoman Empire shifted both political and ecclesial borders several times in the centuries that followed.

“Montenegro” was first used as a marker in the 15th century, and in 1905 it became an independent kingdom.

But in 1918 at the close of World War I, a Montenegrin committee deposed the monarch and integrated into the newly formed Kingdom of Yugoslavia. Two years later, the ruling regent ended what Montenegrin officials say was their own autocephalous church, placing it under the jurisdiction of the Serbian Orthodox.

In 1993, a renegade priest split and created a newly proclaimed Montenegrin Orthodox Church. Not recognized by any other Orthodox leaders, the Federal Republic of Yugoslavia (FRY) granted it status as a nongovernmental organization in 2001. (The FRY, consisting of the republics of Serbia and Montenegro, formed following the 1992 breakup of socialist Yugoslavia.)

And in 2018, the Montenegrin parliament officially invalidated the 1918 and 1920 decrees.

“The government wants to complete the process that started with the independence referendum,” said Nadazdin. “Promoting its own Orthodox church is another safeguard to preserve the Montenegrin identity as clearly separate from the Serbian.”

Nadazdin, an ethnic Serb, pastors a church of about 20 people. Members are primarily converts from among the Muslim Roma—commonly known as gypsies—of Kosovo.

The entire evangelical population of Montenegro is only about 200 believers. Less than half are citizens, and almost none of their leaders are.

Within Montenegro’s population of 620,000, only 45 percent are ethnically Montenegrin. Nearly 3 in 10 are Serbs. Bosnians and Albanians make up most of the rest, the largest part of the 17-percent Muslim community.

Stanisa Surbatovich, the only evangelical ethnic Montenegrin pastor in the nation, thinks the reality is higher than 30 percent. Though he believes the government is righting a historic wrong, he says most people have not been animated by the controversy.

“Until this recent religious law, most people identified themselves as Orthodox as part of their Slavic ethnic identity,” he said.

“Only the strongly political stressed the ‘Serbian’ or ‘Montenegrin’ aspect, and the average citizen is very confused by these demonstrations.”

Surbatovich, originally from California, came as a missionary in the mid-1990s. Born to Montenegrin parents and raised in the American parishes of the Serbian Orthodox Church, he appreciates the new law for its religious freedom provisions. Overall there have been few problems with government or church authorities.

Evangelicals are looked down upon as a sect, he said, yet partnered with the Serbian Orthodox Church to bring the renowned Montenegrin-descended evangelist Nick Vujicic of Australia—who was born with no arms or legs—to the area to promote handicapped access to churches in 2016.

Not that even the able-bodied attend regularly.

On an average Sunday, Surbatovich’s evangelical congregation of 25 people will represent more than 10 percent of churchgoers in Niksic, the nation’s second-largest city with an Orthodox population of 35,000.

Most haven’t even bothered to baptize their children, he said. And Thomas Bremer of the University of Muenster told Radio Free Europe that the Montenegrin Orthodox Church wouldn’t even have enough priests to populate the churches it wishes to occupy.

Though no clear list exists, there are 700 to 800 Serbian Orthodox churches in Montenegro, and 66 monasteries.

There is also money in play. One of the disputed properties lies along valuable Adriatic Sea coastline, ripe for touristic development.

Montenegro, which joined NATO in 2017, wished to join the EU and shelved the law. The version that passed last month met with overall EU approval, including the procedure to revert religious lands to the state as part of its cultural heritage.

Though Montenegrin officials agreed this would not affect the pre-existing rights of the religious community to use the property, legislators ignored the EU recommendation to state this clearly in the text of the law.

Surbatovich was part of the overall consultative process for the first draft law and recommended changes. His colleague Danijel Petkovski, director for Montenegro’s International Fellowship of Evangelical Students, said evangelicals would have been “collateral damage.”

But now, the casualty is Serbian Orthodox sanctity.

“They may not kick them out, but within a few years the government may say that other churches also applied to use the property,” said Petkovski.

“For the Orthodox, this is like a Roman soldier entering the Jerusalem temple—it will make it unclean.”

The founding priest of the Montenegrin Orthodox Church was defrocked by his Serbian body. Parliamentarians who voted for the law were anathematized. And Patriarch Kirill of the Russian Orthodox Church stated it was “crucially important” to stand with the Serbian church, as “no one should remain on the sideline from what is happening in world Orthodoxy.”

With Ukraine in the background, Russia sees the pro-Western government of Montenegro playing in church politics to lessen the influence of the Serbian Orthodox Church, which opposed national independence.

And a similar autocephalous bid was requested in 2018 by an Orthodox church in Macedonia, which split from the Serbian Orthodox Church in 1967.

Patriarch Bartholomew rejected both requests. They are different from Ukraine in that each national entity entered into agreement with the Serbian Patriarchate of its own accord, he toldPolitika. So only by their joint consensus can he issue a tomos.

Outside of regional politics, Petkovski said, the traditional church in Montenegro viewed itself as a protector of Serbian culture. Montenegrin authorities view it as a barrier to national identity, he believed. And a 2007 poll ranked the Serbian church as the most trusted institution in Montenegro.

Nonetheless, Petkovski is encouraged that the protests have been peaceful. Though its worst scars evaded Montenegro, the Balkan wars of the 1990s killed 130,000 people as some priests in the Serbian church blessed militant action.

“Now the church is not calling for war, but praying to God,” Petkovski said. “It makes some sort of revival, in the Orthodox sense.”

But not in the evangelical sense, as there is no preaching of the Word or repentance from sin, he said. Still, for the first time in decades, his Orthodox priest friends say that their churches are full.

And while there is a “theological renaissance” taking place throughout the Orthodox world, said Bradley Nassif, professor at North Park University in Chicago and an expert in Orthodox-evangelical dialogue, spiritual renewal has largely evaded the Serbs.

He recently visited Serbia in person to promote the Serbian translation of Three Views on Eastern Orthodoxy and Evangelicalism, to which he contributed.

“The current conflict between the Serbs and Montenegrins exposes the true spiritual condition of many—not all—Orthodox clergy and lay people,” Nassif said.

The Serbian ambition to maintain control of property reflects a primary desire for political, economic, and religious influence, he added, but only 3 percent of the people attend church on a regular basis.

“The most urgent need is for the Orthodox themselves to re-evangelize their own people with the gospel of Jesus Christ.”

He explained the religious freedom law both politically and spiritually, which he said was “liberal, modern, and equal” for all communities.

“Montenegro was the last theocracy in Europe, until the Serbian Orthodox Church emerged for exclusively Serbian interests,” now used to destabilize Montenegro, he said.

“This law stops the political use of religion which abuses that most delicate human feeling: faith in God.”

For similar reasons, Surbatovich says evangelical churches have been sitting out this debate. And though this new law may offer them greater access to government, Nadazdin cautions this is actually a threat.

“The church must be careful to never marry itself to a secular power,” he said.

“If such access gets too close to your heart, the influence can be hard to resist.”