The president kicks off 2020 outreach at a Miami church that includes staunch supporters and swing voters.
Kate Shellnutt|January 3, 2020 08:00 AM 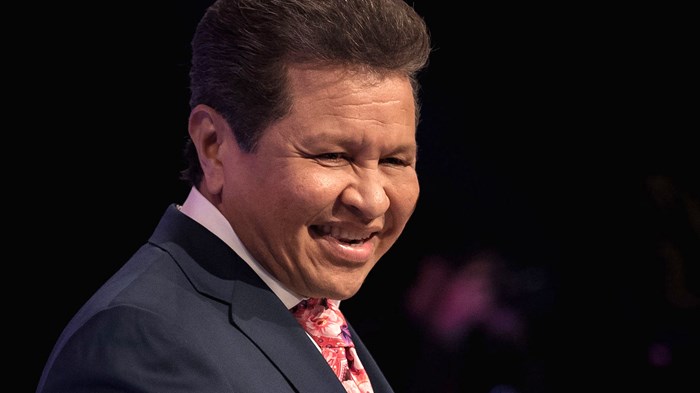 Pastor Guillermo Maldonado has visited the White House several times during Donald Trump’s presidency. Now, the president is coming to his church.

Maldonado leads what’s considered the biggest Spanish-speaking congregation in the country—El Rey Jesús, or King Jesus International Ministry—whose 7,000-seat sanctuary will be the location for today’s “Evangelicals for Trump” rally in Miami, a kickoff to Trump’s 2020 outreach to Christian leaders as well as the Hispanic faithful.

The 54-year-old Honduran American has joined fellow Pentecostal preachers such as spiritual-adviser-turned-faith-outreach-official Paula White-Cain at Trump’s gatherings with evangelical leaders, laying hands on him during a prayer session back in October and visiting most recently for a Christmas reception.

Maldonado serves as an apostle alongside his wife Ana who serves as a prophet at King Jesus, a 23-year-old global ministry that falls in line with the New Apostolic Reformation (NAR) movement. Like leaders at Bethel Church and the International House of Prayer, Maldonado focuses on declaring what he hears as God’s prophetic words.

Maldonado is not only a pastor to his congregation, which holds both Spanish and English services each week, but also a spiritual father to fellow ministers. Beyond the 10 King Jesus churches in the US, Maldonado’s network extends to hundreds of Apostolic churches in 50 countries, plus thousands more who watch him on Daystar and TBN.

A year ago, he claimed he had “activated 1.5 million people in the supernatural.” He describes the practical manifestations of the supernatural, saying that God’s word and his Spirit—released at the right time—transform people’s lives. He shares testimonies of struggling churches of 40 people that turned into booming megachurches of 40,000; secular businesses blessed with dozens of franchises and hundreds of thousands of dollars in profits; and even effective commands to hurricanes to avoid the Miami area.

He’s now one of 70 leaders who have joined the Evangelicals for Trump coalition to back the president in his re-election campaign. King Jesus released a statement explaining that the church has rented space for the event but is not involved in organizing it. Maldonado, the church said, will be appearing in his personal capacity.

Samuel Rodriguez, president of the National Hispanic Christian Leadership Conference called it “politically brilliant” for Trump to start the year with a major rally at a Latino megachurch in Florida.

Trump campaign communications director Tim Murtaugh said the evangelical rally at King Jesus had already been in the works prior to Christianity Today’s viral editorial challenging evangelical support for the president and calling for his removal from office. Trump Victory’s national press secretary, Kayleigh McEnany, told media the church was “a natural fit” since “Apostle Maldonado is a staunch supporter.”

Maldonado also “represents a growing segment of Christianity,” said Candy Gunther Brown, an Indiana University religious studies professor who researches Pentecostals and Charismatics. “Many of Maldonado's emphases—healing, deliverance, faith, prosperity, kingdom of heaven, and, yes, apostolic leadership and tongues—can be found in many, many churches in the US and in Latin America.”

The Miami-based minister—who was born in Honduras and came to faith in college in the US—was among the Hispanic pastors who attended a roundtable with the president last January. He has spoken up in favor of the administration’s border control policies. Ahead of today’s rally, Maldonado assured his church that undocumented congregants would be welcome to attend without fear of deportation: “Someone said, ‘But how can you bring Trump to church if there’s people who don’t have papers?’ I ask you: Do you think I would do something where I would endanger my people? I’m not that dumb.”

The Tampa Bay Times reported that Maldonado also shared from the pulpit “migration miracles” of people in their church including “a woman who had finally become a US citizen after years of waiting, a man who had been previously denied a visa through a family sponsor and received his green card, and a woman who said a change in her son’s immigration status that had put him at risk of deportation was resolved through divine intervention.”

A member of the executive committee for the Latino Coalition for Israel, Maldonado has also praised Trump for moving the US embassy from Tel Aviv to Jerusalem.

But he has mostly emphasized the biblical call to pray for government leaders, regardless of their policy positions. He said commitment to pray for those in power even extended to Fidel Castro in Cuba—though, like many of his congregants who suffered under communist governments in Cuba and Venezuela, he opposed his policies.

Politicians of both parties have made campaign stops at King Jesus services over the years, enough that the Washington Post in 2012 wrote that coming to Maldonado’s megachurch “is a requirement if you want to run for Congress in South Florida.” Maldonado said he takes this responsibility seriously. “What is my responsibility? To pray for them. And to vote,” the pastor said at the time. “Anybody can come here to the church, they asked, and I said okay.”

This fall, Maldonado opened a sermon by greeting his congregation and the viewers streaming the serviced online, saying, “I love this country, I love America, I love the president, I love everybody.” He added, “If you love the president—the Bible says if you don’t love your brother, you’re going to hell. You have to love him. You have to pray for him. Amen? Okay.”

Maldonado is close with the charismatic leader Cindy Jacobs, a fellow apostle who decades ago prophesied that his congregation in Miami would flourish, and now appears alongside her, Lou Engle, Che Ahn, James Goll, and dozens of others at her annual prophetic ministry conference. During last year’s event, Maldonado shared that God told him, “I have raised somebody in office to open the doors for my gospels” and “America, open your eyes. Do not miss the time of your visitation.”

Christians in the New Apostolic Reformation movement—a term which was popularized and described by missiologist Peter C. Wagner—want to see Christians rise to positions of influence across sectors of society. Some refer to the “seven mountains” of business, government, media, arts and entertainment, education, family, and religion. In a 2017 interview with CT, Brad Christerson, professor of sociology at Biola University and co-author of the Rise of Network Christianity, described how many Christians in this movement believe God “is appointing people into these high positions” in government, “he will use them to supernaturally make America or the world into the kingdom of God,” and at this time, “God is using Trump to bring in the kingdom.”

Similar attitudes come up in politics in Latin America, where evangelicals have grown in influence and members of the New Apostolic Reformation in particular have started running for office, according to Martin Ocaña, a pastor who belongs to Peru’s national evangelical council. One apostolic network in his home country, where multiple apostles and their wives (“prophets”) have run for office, states that “the church’s mission is to influence until you get to rule and reign on the earth (Rev. 5:9)” and “we are now in the kairos of God for a more glorious manifestation of the sons and daughters of God in all areas and institutions of human life.”

Christerson observed that American NAR leaders tend to back Christian politicians regardless of whether they are fellow Pentecostals, or in the case of Trump, “Some … describe Trump as a King Cyrus figure—he’s not one of us, but God is using him to defeat our enemies and restore our nation.” (But the US is also seeing leaders from within the movement seek office themselves; last fall, Bethel worship musician Sean Feucht announced he’d be running for US Congress in California.)

Plenty of Maldonado’s 600,000 Instagram followers applaud his work with the White House, liking photos of his visits and mentioning that they too are praying from the Trump administration. But King Jesus in Miami, the spiritual home to thousands from across Latin America, also contains “a lot of swing voters,” Carlos Curbelo, a Republican who represented the area in Congress from 2015 until 2019, told the Miami Herald.

CT previously reported how 41 percent of Hispanics with evangelical beliefs voted for Trump in 2016, according to data from the Billy Graham Center Institute at Wheaton College and LifeWay Research. “Most Latinos will tend to be socially conservative on issues like abortion and same-sex marriage but will tend to be social liberals on issues like education and immigration, so we’ve tended to be divided on how we spread the vote,” said Juan Martínez, former professor of Hispanic studies at Fuller Theological Seminary and now the vice president at Ashland Theological Seminary. “This isn’t new; it just stands out more because we’re a larger percentage of the voting block. Those of us who have voted have struggled with this for years because the Democrat/Republican way that this is broken out doesn’t fit us well.”

Rodriguez of the NHCLC, also one of Trump’s evangelical advisers, predicts more Republican voters in the upcoming election. “Latino evangelicals represent a constituency that is pro-life, supportive of religious liberty, and focused on biblical justice,” he told CT. “The unprecedented hard left turn by the Democratic Party, abandoning the Obama strategy of 2008, will prompt more Latino evangelicals to support President Trump in 2020.”