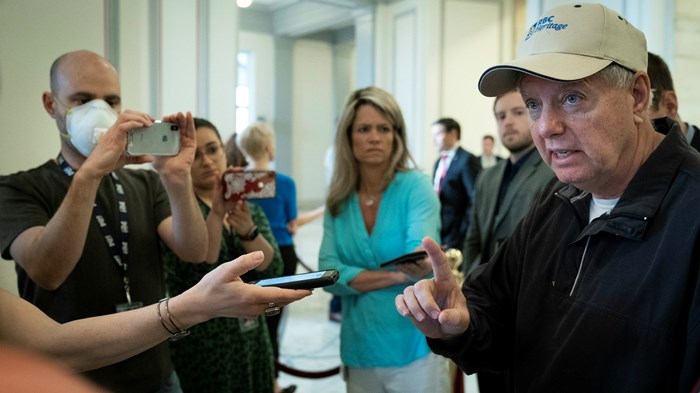 Image: Drew Angerer / Getty Images
Lawmakers and Trump administration officials are in negotiations over the coronavirus stimulus bill, which leaders say they hope to have passed by Monday.

As churches and faith-based nonprofits brace for a painful drop in contributions, Christians are lobbying for Congress to incentivize charitable giving in its response to the spread of COVID-19.

Lawmakers spent Saturday negotiating the $1 trillion-plus relief package. The current Coronavirus Aid, Relief, and Economic Security (CARES) Act, proposes offering stimulus checks, relief for small businesses, and some changes to charitable giving. The bill would allow taxpayers to claim a charitable deduction for up to $300 without itemizing.

But some from the faith community are speaking up to say that’s not enough to keep churches and other non-profits afloat as demand for social services spikes.

“This level of stimulus does not scratch the surface for what charities, nonprofits, and houses of worship need during this time of crisis,” wrote the Southern Baptist Convention’s public policy arm, the Ethics and Religious Liberty Commission, which is calling for a two-year universal deduction for charitable giving, with no cap.

The Center for Public Justice (CPJ) in Washington made a similar recommendation, saying the universal deduction should be effective immediately. (Many charities had been pushing for a change in the charitable deduction since before the coronavirus outbreak; because of tax reform enacted in 2018, fewer Americans get to claim their charitable contributions, thereby reducing giving.)

CPJ’s Rachel Anderson and Stanley Carlson-Thies also argued that since faith-based organizations are involved in caring for those put at risk by the pandemic, they should not be exempt from unemployment insurance or reimbursement for mandated leave.

“Religious communities have sprung into action, sustaining social ties in a time of social distance and caring for those most at risk of homelessness, food insecurity, and isolation,” they said. “These same religious communities and faith-based institutions will need support now and as the crisis persists.”

Deseret News’s Boyd Matheson, former chief of staff for US Senator Mike Lee, said in an op-ed published Saturday that Congress needs to support civil society as they take on unprecedented demand and constraints.

He evoked the New Testament, writing, “The best way to help Americans in need and strengthen the economy is really Samaritanly simple. The biblical account says the Good Samaritan first helped a stranger in need. Second, he donated his time by taking the wounded stranger to an organization — the inn. Then, when it was no longer possible for the Samaritan to sustain the first two gates of giving, he deployed the third; he offered a charitable donation. He even promised he would give again, if needed.”

Churches are seeing the fear and financial strain tighten purse strings already, particularly since congregants no longer have the opportunity to give at typical in-person services. The drop in tithing limits their ability to organize outreach in their communities, and in some cases can threaten the future of a congregation.

At Friendship Baptist Church in Baltimore, a mostly African American congregation of about 1,100, Alvin Gwynn Sr. bucked the cancellation trend by holding services last Sunday. But attendance was down by about 50 percent, and Gwynn said the day’s offering netted about $5,000 compared to a normal intake of about $15,000.

“It cuts into our ministry,” he said. “If this keeps up, we can’t fund all our outreach to help other people.”

There was a brighter outcome at the Church of the Resurrection, a large United Methodist Church congregation that operates out of five locations in the Kansas City area.

Cathy Bien, the church’s communications director, said about 25,700 people logged in to join online worship last Sunday after in-person services were canceled. That compared to normal Sunday participation of 14,000 worshippers -– 8,000 in person and 6,000 online.

The huge turnout didn’t translate into a larger than normal offering, although the church is still processing checks that were sent by some of the worshippers, Bien said. She expressed hope that financial support will remain robust as the church stresses the need to bolster food pantries and other community programs in the face of COVID-19.

At Trinity Presbyterian Church in Charlottesville, Virginia, giving was down modestly last weekend as the church cancelled in-person worship and made the service available online.

The pastor, Walter Kim, said some of his roughly 1,000 congregants have grown accustomed to online giving in recent years, but many worshippers still give in person at the services.

“We’ll be asking them to sign up (for online giving) or mail a check,” said Kim. He will be urging congregants to bolster the church’s “mercy fund” for use assisting hard-up members of the community as job losses multiply. (Editor’s note: Kim is also a board member for CT.)

In addition to his pastoral duties, Kim is president of the National Association of Evangelicals, which represents more than 45,000 evangelical churches. The NAE will be co-hosting a two-day digital summit next week featuring videos from church leaders advising other pastors nationwide how to respond creatively and effectively to the virus outbreak.

The co-host is the Humanitarian Disaster Institute at Wheaton College, which already has offered resources to churches in response to COVID-19.

“Some changes are going to be required,” Kim said. “The church is a very creative institution. In the end it will find ways of fulfilling its mission.”

Joe Wright, executive director of the Bivocational and Small Church Leadership Network in Nashville said many pastors in the network have been holding regular in-person services, while monitoring the spread of the virus.

“Once the coronavirus rises to the level where it starts hitting smaller groups, then we’ll see even the smaller groups back away and seek ways to gather, probably electronically,” he said.

When that happens, Wright said, financial giving will depend on the church, especially the age of the congregations.

“Some churches with older congregations do not give electronically so the transition to that will be a little bit harder,” he said.

Ron Klassen, executive director of Rural Home Missionary Association, said it’s too early to say how the rural churches he represents are being impacted.

“My sense is that in the past, people rise up and, if anything, the giving might increase,” he said. “People are going to give. They’ll take care of their church and their community.”