Platforms, apps, and networks once built as a supplement to in-person gatherings have become the primary point of connection for millions.
Kate Shellnutt|March 19, 2020 11:00 AM 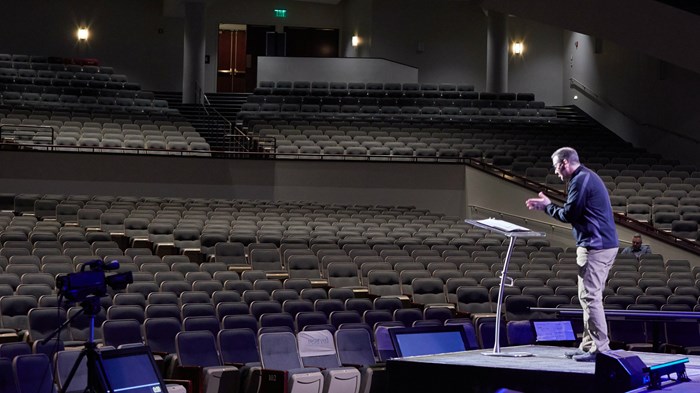 More Christians worshiped, prayed, and shared Scripture online in the past week than ever before, as COVID-19 precautions shut down in-person church gatherings across the US and around the globe.

Bobby Gruenewald would know. His team at Life.Church developed the popular YouVersion Bible app as well as the Church Online Platform, which was used to stream worship to more than 4.7 million devices last weekend, quadruple its typical reach. (Update: The weekend after this story was published, March 21-22, total attendance rose to 7 million.)

These technologies have existed for well over a decade, and about a quarter of Protestant churches in the US already livestream services in some format, according to LifeWay Research.

But what happened starting last weekend was unprecedented.

Churches across traditions took advantage of the technology and met over YouTube, Facebook Live, Zoom, and outlets like Church Online, which saw 8,800 new congregations join in the past seven days. It’s a free platform that adds church-specific features to a typical video steam, so congregants can participate in sermon discussions and leaders can connect with individuals who need prayer.

Gruenewald said when they built Church Online 14 years ago, they imagined it would help tech-savvy churches get their messages to a new crowd, allow services to go on in the aftermath of natural disasters like tornadoes and hurricanes, and provide a way for Christians to gather in places where their activities are restricted.

“But we didn’t anticipate a time where in our country nearly every church’s doors are closed. That was unthinkable,” Gruenewald said. “It’s like there’s an ark being built, and we didn’t know it would rain.”

Churches’ digital resources typically supplement in-person gatherings, providing access for those who are sick or traveling or, at some multisite churches, assembling those who prefer to worship online into an “online campus.” But now they’re a lifeline, whether for worship, tithing, small groups, or prayer.

More than 1.4 million prayers have been created since the Bible App launched a new prayer function in early March. Though the app doesn’t track the topic of prayers, it’s clear what users are reading: Philippians 4:6–7 (“Do not be anxious about anything …”) trended into the top five verses, while searches about anxiety, hope, and fear multiplied. Overall, last Sunday tied for the highest number of shares in a single day for the app, reaching a record set last Easter.

Topics related to the end of the world, disease, and fear have spiked on Bible Gateway, with searches for Psalm 91 (“Surely he will save you … from the deadly pestilence”) tripling and becoming the most-searched passage on the site. Searches on 2 Chronicles 7:14 increased ninefold from the week before: “If my people, who are called by my name, will humble themselves and pray and seek my face and turn from their wicked ways, then I will hear from heaven, and I will forgive their sin and will heal their land.”

Church Online is gearing up for another record-setting weekend and hopes to support many more congregations going forward.

“Obviously as followers of Jesus, we’re not going to sit in despair or fear, but there are naturally human emotions that come with the isolation,” said Gruenewald, who spent 14 days alone in quarantine after he and Life.Church senior pastor Craig Groeschel were possibly exposed to COVID-19 in Germany last month. Just as he was released, the rest of the country began its coronavirus crackdown, canceling personal plans and forcing his team to pivot to develop a suite of new resources, including a midweek devotional service launching at Life.Church and special prayers around coronavirus for the Bible App.

“We’ll just have to work really, really hard with the digital tools that we have and within the right safety protocols to figure out how we can have the right contact with people,” he said.

Now, in the West, thousands of churches are offering digital services for the first time, while others are expanding existing offerings. One congregation, Casa De Dios in Guatemala, saw attendance reach 141,000 on Sunday.

Megachurches in the US similarly reported staggering numbers. Joel Osteen’s Lakewood Church drew in 4.51 million viewers, more than when Kanye West visited last year. Greg Laurie’s Harvest Fellowship had over 230,000 devices tuned in to its Harvest at Home service on Sunday, and celebrated over 1,400 online commitments. After closing its locations in Seattle and Los Angeles, Churchome—led by Judah Smith—saw online church attendance double and a steady increase in accounts on its new app (promoted by Justin Bieber).

Zoom declined to provide specific usage figures but reported that the video conferencing system has seen a “large increase” in users amid the outbreak, starting in Asia and Europe.

Ministries who have long embraced the church’s digital dimensions also have been stepping up to offer resources to congregations that suddenly need them, from equipment and studio space for recording sermons to free website setups for facilitating online giving, since closed churches won’t have the chance to pass the plate.

Hundreds of churches have taken advantage of special COVID-19 digital giving pages built by LifeWay. The digital giving platform Pushpay is also promoting new resources, advising churches to keep giving prompts as a part of their digital messages and set up relief funds to support community members who suffer financially as a result of the coronavirus closures.

Church technology and social media gurus are trying to help pastors maximize their digital efforts, advising them to go beyond the video clips to incorporate greeters in the comments to welcome online attendees or add outlets for them to chat throughout the week.

Plus, churches that embrace online replacements to their in-person gatherings have an opportunity to model a response for the millions of congregants who join in.

“Set an example for your church of what it looks like to walk through this coronavirus scare in faith,” wrote Paul Maxwell, who works for the digital giving platform Tithe.ly. “They will be inspired by your continued church production work in the virtual space, and may perhaps even be prompted to switch to a safer virtual model in their own professional and social contexts.”