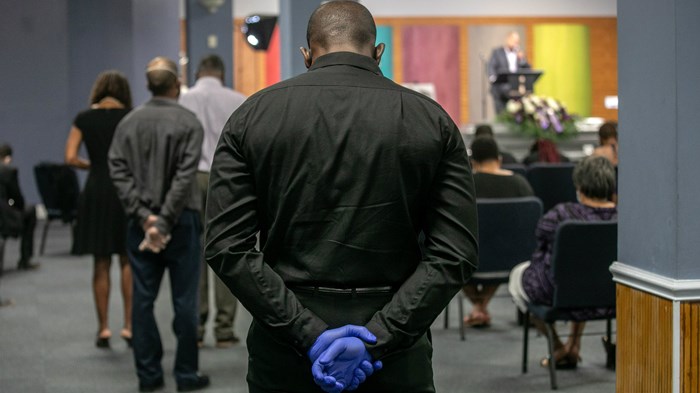 New research suggests that, at the beginning of the pandemic, Americans from lower-income or majority-minority neighborhoods were more likely to be infected with COVID-19 through religious gatherings such as churches than those living in higher-income or predominantly white neighborhoods.

Cell phone data was an early indicator that Sunday morning church attendance slowed significantly in the spring. According to a new model published in Nature, it also reveals the disparities in which segments of the population were able to stay at home and reduce exposure.

Researchers at Stanford University found that churches were among the top five sites for coronavirus transmission, alongside restaurants, gyms, cafes and snack bars, and hotels. According to an analysis of anonymous cell phone data, these places tended to have more visitors and longer visits. In all, the model calculates that visits to these sites accounted for 70 percent of transmitted cases during the first several weeks of the pandemic.

The study used mobility data from cell phone users in 10 large US metro areas throughout March and April. They calculated the transmission rate in various neighborhoods by overlaying US Census data with the density of infected individuals in those locations. (They compared it to the New York Times’ COVID-19 case tracker and found the model to be an accurate prediction.)

Even though black churches have generally been the most cautious about reopening, residents in black and Hispanic neighborhoods who met in person during this time carried a greater likelihood of transmission largely due to their higher mobility and more frequent visits to crowded places.

Since contact-tracing efforts weren’t widely available, the cell phone data has stood in to help researchers understand people’s movement around their cities. During the first months of the outbreak, visits to churches and other religious organizations dropped by an estimated 6.18 million in New York, an early hot spot. In Chicago, there were 3.27 million fewer visits; in San Francisco, 1.23 million fewer.

Among the major metro areas in the study, Philadelphia stands out with the starkest disparity. The model indicated that people living in neighborhoods of color faced an infection risk 20 times higher than people living in white neighborhoods, if all activities had fully reopened during the outbreak.

In Atlanta and Dallas, though, infection rates in nonwhite neighborhoods were shown to be near to equal that of whites, while seven other cities fell somewhere in between.

“Philly is the largest poor city in America. We’re dealing with a pandemic, but we’re also dealing with unemployment and racial issues, just to name a few,” said J. R. Briggs, a pastor who knows about a dozen people who have contracted the virus and one who died. “With cases on the rise again, people are feeling discouraged and trying not to lose hope.”

Philadelphia issued another “Safer at Home” order last week, though churches are not specifically shut down. For the most part, pastors have been left to discern how to operate safely amid mandates and orders from both state and local officials in Pennsylvania, said Briggs, who coaches pastors in Philadelphia and around the country through Kairos Partnerships.

Last spring, a leader with the Church of God in Christ, the largest African American Pentecostal denomination, told CT, “Our churches are primarily located in dense urban areas, which are many of the epicenters of this virus.” The denomination’s presiding bishop repeatedly advised churches to follow public health guidelines and refrain from reopening prematurely.

The Stanford researchers found that those living in higher-income neighborhoods were able to reduce their mobility—with remote work arrangements and food delivery—more than low-income residents, who are more likely to be essential workers.

The findings about racial disparities ring true for Elizabeth Rios, whose Passion2Plant network supports black and brown church planters. “Those in poorer neighborhoods have jobs that don’t provide work-from-home opportunities,” she said. “Some who have lost jobs are trying to take any job they can find to make ends meet.”

And even if churches can afford cleaning supplies, hand sanitizer, masks, or other personal protective equipment needed to reopen safely—precautions that weren’t taken into consideration in the Nature models—their congregants may be predisposed to infection due a higher rate of preexisting conditions in lower-income or racial minority groups.

“Consequently, reopening strategies can have a different impact on disadvantaged groups than on the population as a whole, and it’s important to take this into account,” wrote the research team, led by Serina Chang, Emma Pierson, and Pang Wei Koh.

But churches also want to be able to offer gospel witness and spiritual support to the groups hit hardest by the virus. “Practically, the church ought to be the biggest servant to the most vulnerable in creative ways, and we should be a safe space of deep belonging for the lonely and isolated,” said Carlos Rebollar, lead pastor at the recently planted church Sojourn East End in Houston.

Given the risk in their communities, pastors of color have been the most conservative about resuming in-person gatherings. This fall, 60 percent of African American pastors said their congregations did not meet in person, compared to 13 percent of pastors overall, per a LifeWay Research survey.

As another wave of the pandemic hits, the Stanford researchers caution that their model is based on data from the spring. It predicts risks for spaces that reopen in full without mask wearing and other precautions used at most churches these days.

“The risk to society of fully reopening a category is not equivalent to how risky it is for you, as an individual, to visit,” they wrote. Other studies have looked at the risk of visiting places like heath care facilities.

Since the beginning of the pandemic, Christians have faced scrutiny as some early global and US “superspreader” events were connected to churches. News media continue to cover Christians meeting in defiance of state orders, such as pastor John MacArthur’s Grace Community Church in California and Sean Feucht’s praise protests across the nation.

Rios worries that Christians are getting mixed messages about the risks of reopening but says they should know that following health guidelines does not insinuate a lack of faith.

“Doing the right thing communicates hope over despair of this season or disregard of people,” she said. “The church has always been the place to find hope in the darkest of moments.”