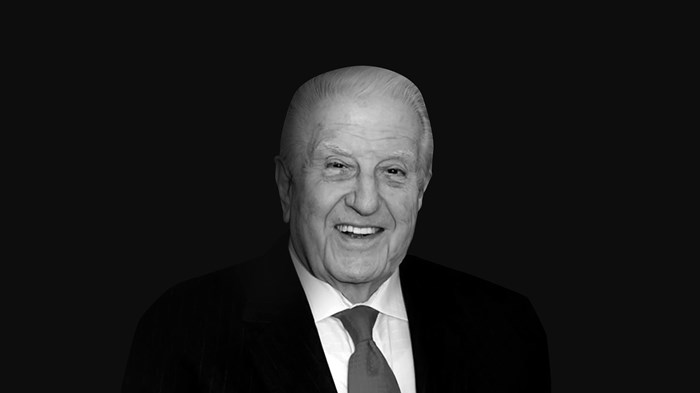 John Edmund Haggai, a preacher and revivalist who saw the need to equip Christians around the world to evangelize their own countries, died Wednesday at 96.

Known for challenging people to “attempt something so great for God, it’s doomed to failure unless God be in it,” Haggai founded Haggai Institute for Advanced Leadership, moved it to Singapore, and trained more than 120,000 evangelists from non-Western countries, including 1,200 from Indonesia, 400 from the Philippines, 500 from India, 400 from Nigeria, and 380 from Brazil. He argued this was the best new strategy for global missions after the end of Western colonialism.

One of his first students was K. P. Yohannan, who went on to found Gospel for Asia.

“Haggai was full of stories,” Yohannan recalled. “In them all, Christians were overcomers and giants—men and women who received a vision from God and refused to let go of it. Diligence to your calling was a virtue to be highly prized. Haggai was the first person who made me believe that nothing is impossible with God.”

Haggai was born in Louisville, Kentucky, in 1924. His father was a Syrian refugee who had fled Turkish forces in 1912 and was welcomed to the United States. The elder Haggai converted from Eastern Orthodox to evangelical Christianity, enrolled in Moody Bible Institute, and became a Southern Baptist pastor.

The younger Haggai was inspired to follow in his father’s footsteps: He accepted Jesus as his Lord and Savior at four years old and announced he felt a call to preach at six. A few years later, Haggai said he wanted to be a missionary to China.

Haggai went to Moody like his father and met Christine Barker from Bristol, Virginia, a soprano who sang professionally from the age of 13 and had her own weekly musical program on the radio. She had given up a scholarship at Julliard to attend Moody. Haggai fell in love, and the two got married the day after graduation in 1945.

While the young graduate still dreamed of being a missionary to China, a civil war broke out between nationalists and the Communists, and the Haggais decided to stay in the US. Haggai soon accepted a position pastoring a church in Lancaster, South Carolina. He grew it to about 1,000 members and won praise for record-high Sunday school attendance.

Haggai also started a radio ministry, with a 15-minute weekly program called Crusade for Christ. He got a second degree in history and philosophy at Furman University in Greenville, South Carolina, and started traveling with Youth for Christ.

He was a powerful and popular speaker on the evangelistic circuit. One ad claimed that though only a young man, he “has plumbed the depths of the Bible and emerged with usable answers to many of the problems of our time.” He condemned the moral decline of the era and urged people to turn to the Bible as a guide for life.

In one sermon, he preached that “a million hammers have banged away at the anvil of God’s Word,” and now “the hammers are broken but the anvil remains.”

Haggai did not directly challenge the racism and the segregation of the South, but he occasionally himself ran afoul of the racial codes. In one hotel, he was mistaken for a singer who was supposed to perform. In some parts of the country, ads for his evangelistic crusades spelled out his ethnicity ahead of time.

In 1950, the Haggais had their only son, John Haggai Jr. He suffered a traumatic brain injury at birth, caused by an intoxicated doctor. The couple refused to institutionalize their son, and Christine committed to caring for the boy full time. After Johnny died at 24, Haggai wrote that those his namesake never spoke more than two words at a time, he was convinced his son prayed powerful prayers, trapped inside his broken body.

A few months after Johnny’s birth, the family moved to Chattanooga, Tennessee, where Haggai took over as senior pastor at Woodland Park Baptist. His first sermon at the megachurch was titled: “What’s Wrong with Your Church.” He challenged the congregation to live out their faith, witness to their neighbors, and support global missions.

In 1956, Haggai moved to another megachurch in Louisville, Ninth and O Baptist Church. The Sunday school had more than 2,000 regular attenders. He baptized about 420 people his first year and grew the church’s mission class to nearly 1,000. Haggai was asked to speak at the pastor’s conference ahead of the Southern Baptist Convention that year, and decided to preach about what was wrong with preachers.

The sermon brought him national headlines. “BLAME ON PULPIT,” one said: “Ministers Who Substitute for Gospel Preaching are Scored at Baptist Convention.” Invitations to speak started rolling—more than 700 around the country—and Haggai decided to leave pastoral ministry and become a full-time itinerate evangelist.

After many years supporting mission work and encouraging missionaries, Haggai got his chance to proclaim the gospel abroad in 1964, when he was invited to preach in Lebanon. There, an interaction with Christians in Beirut changed the rest of his career in ministry. He heard some local Christian leaders complaining about missionaries.

“Frankly, it made me angry,” Haggai later recalled. “I knew that missionaries the world over had sacrificed greatly, many giving their lives. How could anyone question the methods of those willing to pay such a high price for their commitment?”

The local leaders told him that Westerners did not cooperate with local Christians and often barred them from leadership positions, even if they had more experience and education than the missionaries. They misunderstood local cultures, causing unnecessary offense, and seemed to the unconverted to represent colonial power rather than the cause of Christ.

“It was a significant moment for Dr. Haggai,” said Ebenezer Bittencourt, director of the Haggai Institute in Brazil. “On the plane ride home, he realized that the world was changing and that the strategy for missions and evangelism had to change too.”

He developed his first leadership training institute to “equip and inspire” national leaders in 1969, in Switzerland. The first students were from Indonesia, India, Pakistan, Korea, what was then called Formosa, and Lebanon.

Two years later, with a $500,000 gift and a $130,000 loan from Cecil Day, founder of Days Inn Hotels, Haggai moved the institute to Singapore. On Day’s advice, the board members were all Singaporean, and Haggai was the only teacher with a US passport. The ministry trained evangelists from 189 countries.

“The Haggai Leadership experience, it really changed the way I see the world,” said Josie Ching, a Christian in the Philippines. “I got it, that each of us is a missionary in our right and in the place that God placed us.”

The institute celebrated its 50th anniversary in 2019, with more than 600 leaders from more than 60 nations. The ministry committed to training 250,000 more leaders in the next decade.

Haggai was preceeded in death by his son, Johnny, who passed in 1975, and his wife, Christine, who passed in 2019. Haggai International is collecting tributes to his life and work from around the world and planning an online memorial service.

Editor’s note: This article is part of our 300+ CT Global translations.