Nonprofits are offering churches more ways to give during a season with fewer in-person gatherings.
Kate Shellnutt|November 17, 2020 01:09 PM 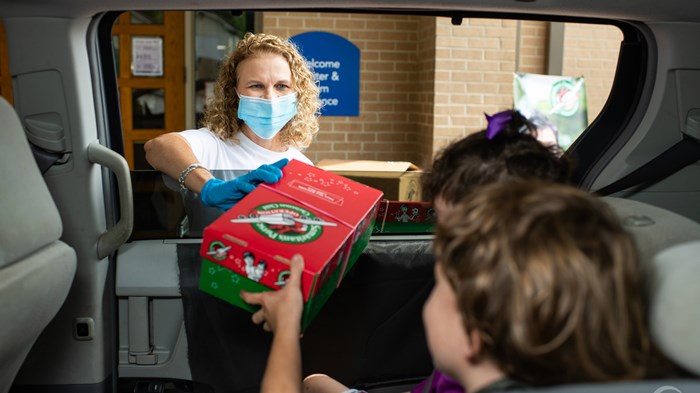 Just as Christians are reimagining what celebrating, worshiping, and shopping will look like this Christmas amid coronavirus restrictions, they may also have to change how they give.

As seasonal activities get downsized, canceled, or moved online, Americans will miss out on some of their traditional opportunities to contribute to charities that rely on presents or cash donated in person during the holidays.

Top Christmas charities like Operation Christmas Child, Prison Fellowship’s Angel Tree, and the Salvation Army’s Red Kettle campaign are adapting to provide socially distanced avenues to donate in person while expanding their online giving options. During a year when vulnerable populations have suffered economic downturns and the anxiety of the pandemic, this is not the time to let their outreach slip.

The Samaritan’s Purse project Operation Christmas Child, which distributes shoeboxes of gifts to needy children in 100 countries, typically relies on collections at churches, some of which aren’t gathering due to the coronavirus.

This week is national collection week for the red and green shoeboxes. While 4,000 drive-through, no-touch collection sites remain, Operation Christmas Child has seen a record number give online: 190,000 boxes were donated online this year, a more than seven-fold increase over 25,000 last year.

On the Operation Christmas Child website, donors can select the sex and age of their recipient, pick items to fill their shoebox, and pay $25 to cover the gifts and shipping. The operation partners with ministries overseas to distribute the boxes.

“For the children of the world, the need for boxes this year is greater than ever,” Samaritan’s Purse president Franklin Graham told CT. “With our partners in third-world countries, they are excited because so much of the ministry has been curtailed for them this year, and now this is the opportunity to get back to work again … seeing people get saved and children blessed.”

The pandemic has disrupted the giving patterns many nonprofits count on each year. According to an Evangelical Council of Financial Accountability (ECFA) survey, about a third of nonprofits in relief and development and international missions were pessimistic or uncertain about donations this fall, while a two-thirds majority were optimistic. Rescue missions were among the most confident, with 77 percent indicating a positive outlook.

“Overall, we’ve tracked an encouraging resiliency in Christ-centered nonprofits as they’ve pressed forward in mission, made a degree of financial adjustments, and seen God’s provision in fueling their ministries,” said ECFA president Michael Martin, noting that 68 percent of nonprofits said this year’s giving matched or exceeded 2019 so far.

With demand for shelter and meals up dramatically at Salvation Army centers nationwide, leaders fear it cannot rely on holiday foot traffic and spare change to cover it all—especially when stores are closing and many aren’t taking cash right now.

“It became apparent that we had no choice but to rethink our fundraising, specifically our annual Christmas campaign, because our commitment to help others will never be in doubt,” wrote national commander Kenneth G. Hodder. “We read in Philippians 4:19, ‘And my God will meet all your needs according to the riches of his glory in Christ Jesus.’”

In addition to masking up its remaining bell-ringers, the Christian church and charity has added digital donation options through Apple Pay, Google Pay, or text (“KETTLE” to 91999), and Alexa users can donate over their Amazon device. The Salvation Army also moved its fundraising season up to September this year in hopes of offsetting the fundraising challenge.

Similar to the Operation Christmas Child shoeboxes, Prison Fellowship has been flexible with its annual Angel Tree program, which last year involved 8,000 church partners sponsoring Christmas presents for 300,000 children with a parent in prison.

While incarceration cuts across demographics, many of these families have faced economic challenges in 2020 on top of COVID-19 policies keeping them from seeing their loved in prison, said Charles Rock, the program’s national director.

Participating churches typically reach out to the families—many times, children are staying with a grandmother or another relative—to hear more about what they want for Christmas and how the church can serve them. “Angel Tree is about relationship and connections,” said Rock. “It’s a really face-to-face personal ministry.”

But leaders knew back when the pandemic hit months ago that this year’s Angel Tree programs would have to be more innovative to keep families safe. Some churches are holding drive-through gift collections or have planned to deliver presents to families with socially distant drop-offs and Christmas caroling.

The ministry also launched a virtual version of its Angel Tree for churches that won’t be gathering in person and can’t display a tree for donors to pick out tags for each child. Through the online option, they can still choose which child to sponsor, but instead of buying and wrapping gifts, they’ll pay to cover gift packages for them including Walmart gift cards. Prison Fellowship expects around 50,000 to 60,000 kids to be served through the virtual Angel Tree this year.

But the adapted giving options still depend on people being willing to donate at Christmas. The national economic outlook has gotten darker as the US faces another wave of cases going into the holidays.

Half of pastors say the economy has hurt their congregation, and about a quarter have seen giving drop by more than 10 percent compared to last year, according to a LifeWay Research survey released last week.

But Southern Baptists are still setting a goal for a record-setting $175 million for its annual Lottie Moon Christmas Offering, which supports missionaries around the globe. Last year’s offering, which came in at $159.5 million, helped offset lost income due to the pandemic.

“Throughout our 175-year history, these sacrificial givers have looked beyond present hardship with hope and continued or even expanded their faithful giving in the toughest times,” said Chris Kennedy, the chief advancement office for the Southern Baptist Convention’s International Mission Board. “We fully believe they will maintain this generosity in our present circumstances.”