In spiritual memoirs, son of prominent Christian family wrote about finding the fullness of his childhood faith in the Catholic church.
Daniel Silliman|October 19, 2020 09:00 AM 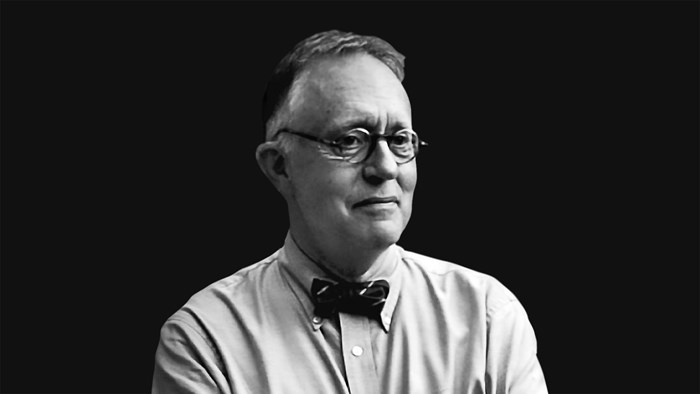 Howard marked out a path to Rome in his spiritual memoirs, notably Christ the Tiger, Evangelical Is Not Enough, Lead, Kindly Light, and On Being Catholic. He wrote with grace and gentle wit about his journey from evangelical son to bow-tied Anglican professor and then to Catholic convert, received into what he came to see as the one true church.

An unknown number of educated young evangelicals followed Howard into Catholicism, and more found their own spiritual longings articulated in his prose. Howard’s love for liturgy and a concern for orderliness and unity drew him to the church, even as he continued to appreciate and celebrate aspects of his childhood faith.

Howard was born into a leading evangelical family in Philadelphia in 1935. His parents had served as missionaries to Catholic Belgium before returning to the United States in the 1920s so his father Philip E. Howard Jr. could run the Sunday School Times. The weekly newspaper was the largest in the country for self-identified fundamentalists, and the elder Howard succeeded his uncle Charles Gallaudet Trumbull as editor, who had himself succeeded his father, Henry Clay Trumbull.

“Our group held to what it saw as Biblical Christianity and protested the mass apostasy of the age,” Howard wrote.

The family was deeply commited to missions and the six children were raised to be missionaries. Discipline was called GMT: Good Missionary Training. Howard’s older sister Elisabeth became a missionary to Ecuador, where her husband Jim Elliot died trying to evangelize the Waorani people. Howard’s brother David headed the World Evangelical Alliance for a decade.

Howard recalled his childhood as civilized and cozy and framed by strict religious education. His parents believed in punctuality and required the children to sing a hymn every morning after breakfast, followed by a Scripture reading and the Lord’s Prayer. They prayed again at night.

Howard said that as a child, he inherited an energetic piety, an earnestness about holy things, and the sense that he was being directly addressed by the Lord. He also thought faith was mostly a list of prohibitions meant to keep Christians pure and separate from “the world.” He lived in fear he would succumb to the temptations of the index of forbidden activities, notably “sex, alcohol, tobacco, bridge, the foxtrot, the races, and the movies.”

(“What might be written in superscript over the entire evangelical list of taboos,” Howard later wrote, “is the word cleanliness.”)

His sense of the orderliness of his religious tradition was thrown into crisis when Howard went to Wheaton College and was met by what he saw as the chaos of the varieties of evangelicalism. Howard questioned what he’d previously thought was certain—and came to doubt the power of propositions and orthodoxies to hold his faith together.

His first response was an evangelical one. Howard wrote a critique of dogma and systematization, arguing that Jesus is always greater than our theology. The book, Christ the Tiger, made him a minor evangelical celebrity, though nowhere near as famous as his sister Elizabeth, who published Through Gates of Splendor when Thomas was 22.

Howard joined the Episcopal church and became an expert in British literature, writing his doctoral dissertation on the novels of Charles Williams. He also became one of the early experts on C. S. Lewis and a specialist in T. S. Eliot’s religious poetry. He took a position teaching English at Gordon College and was known as a tweedy professor who loved all things Oxford and attracted a loyal retinue of students.

He returned to religious memoir as he neared 50, with the publication of Evangelical Is Not Enough. Howard wrote the book as a defense of liturgy and church traditions, including written prayers, the church calendar, the sacramental understanding of Communion, and the veneration of the Blessed Virgin Mary.

He argued that evangelicals were orthodox but had shorn themselves from the ancient tradition that ensures orthodoxy.

“We would have been more at home in the company of apostles, fathers, doctors, confessors and ancient traditions of catholic orthodoxy than among modern churchmen,” Howard wrote. “But there is something peculiar in this way of talking about evangelicalism. Our imagination did not run to creeds, fathers, doctors, tradition, or catholic orthodoxy. When it came to anchoring our faith, we cited the New Testament and nothing else.”

Howard decided to anchor his faith in the Catholic church in 1985. He resigned from Gordon two days later. Christianity Today published a three-part report on his conversion, including interviews with his sister Elisabeth, brother David, and close friend J. I. Packer, as well as Howard himself.

At the same time, Howard argued that he was more evangelical because of his conversion, not less. The Catholic church was the fullest and final form of the faith, he said, not another denomination or just an expression for a preference for a particular worship style.

“I will never be anything but an evangelical,” he said. “As a Catholic, I can lay claim to the ancient connotation of the word ‘evangelical’—namely, a man of the gospel, referring to the gospel, the evangelical councils, and so on. If, however, by evangelical we mean the 18th- and 19th-century movements in the Church of England, or the Free Church movement, or if we’re speaking specifically of the American revivalist phenomenon, then I might find myself outside the circle that these people might like to draw.”

The Catholics who were influenced by Howard regularly pointed to evangelical aspects of his character that made him, in their eyes, a good Catholic. His faith continued to be formed by his deep knowledge of Scripture, his sense of a direct relationship with God, and his missionary spirit.

“That evangelical world prized the missionaries,” wrote Dwight Longenecker, a Catholic priest who was also raised evangelical. “With that missionary spirit is a great sense of adventure. You can set out and do something beautiful for God. God will provide. Do not be afraid! … That’s the spirit that led him to follow his heart to become first an Anglican, then a Catholic.”

After Gordon, Howard moved to St. John’s Seminary in Boston and taught there for 14 years. He was a faithful lay Catholic for the remainder of his life, and though he never achieved the stature of other notable converts like John Henry Newman and Richard Neuhaus, he served as a mentor to many former evangelicals. He wrote a line-by-line commentary on Eliot’s poem Four Quartets and continued to document his spiritual journey with titles like If Your Mind Wanders at Mass.

“We need the tradition springing from the ancient wellsprings of the race to come to our assistance and furnish us with words and movements that will give adequate shape to what it all means,” Howard wrote.

When a human body ceases to breathe and live … nothing will do but ritual and ceremony, that is, words and movements, which, by virtue of themselves springing from the heart of the race, as it were, and of having been tested and dignified by ancient usage, have taken on the weight and solemnity that answer to the occasion, as opposed to our own helter-skelter attempts to respond to what has happened.

Howard is survived by his wife, Lovelace, and their two children, Gallaudet and Charles.