Is the Nagorno-Karabakh conflict a Christian-Muslim clash, or simply politics?
Jayson Casper|October 6, 2020 11:22 AM
Français 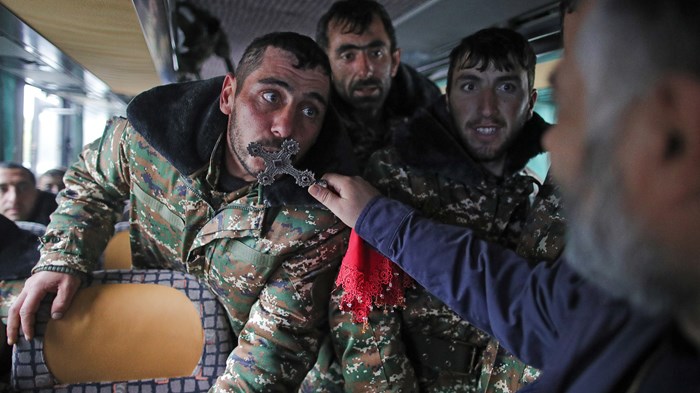 Image: Sergei Bobylev / Getty Images
A priest blesses Armenian volunteers and mobilized military personnel ahead of their deployment to the Nagorno-Karabakh front line on October 6.

Fierce fighting has broken out in the Caucasus Mountains between the Caspian and Black Seas, pitting Christian Armenians versus Muslim Azeris.

But is it right to employ their religious labels?

“Early Sunday morning [Sept. 27], I received a phone call from our representative in the capital city [Stepanakert],” said Harout Nercessian, the Armenia representative for the Armenian Missionary Association of America (AMAA).

“He said they are bombing Stepanakert. It is a war.”

One week later, the fighting continues. At stake is control over the Armenian-majority enclave of Nagorno-Karabakh, home to 170,000 people in a Delaware-sized mountainous region within Azerbaijan.

More than 200 people have reportedly died, though Azerbaijan has not released its number of casualties.

Administered by ethnic Armenians ever since a ceasefire was declared in 1994, locals call the region the Republic of Artsakh. Military skirmishes have not been unusual. There have been more than 300 incidents since 2015, according to the International Crisis Group.

This escalation is the most serious since 2016, with Azerbaijani forces attacking multiple positions along the 120-mile “line of contact.”

But the shelling of civilian cities represents a worrisome development.

As does the role of Turkey—and the Syrian militants it allegedly recruited—which has pledged full support for Azerbaijan.

Russia, France, and the United States—partners in the “Minsk Group” that has overseen negotiations between the two nations since 1992—have called for an immediate ceasefire.

But Turkey has encouraged Azerbaijan President Ilham Aliyev’s refusal, making a ceasefire conditional on a total withdrawal of all Armenian forces in order to restore the Caspian nation’s territorial integrity.

Complicating matters further has been the disputed deployment of Syrian militants. Denied by Azerbaijan and Turkey, several media outlets have reported their recruitment from Turkish-held areas, and their deployment—even deaths—along the line of contact.

This legitimizes Armenian efforts to cleanse Azerbaijan of “terrorists,” said a Nagorno-Karabakh official, even outside the disputed region.

“The Turkish state, which continues to deny the past,” said Armenian Prime Minister Nikol Pashinyan, “is once again venturing down a genocidal path.”

The rhetoric of Turkish President Recep Erdogan does not help. He labeled Armenia “the biggest threat to peace” in the region. In the past, he has called Armenians and other Christians in Turkey “leftovers of the sword,” referring to those who survived the genocide—a term he rejects.

Azerbaijanis, though majority Shiite Muslim by religion, are the world’s second-largest Turkic ethnic group after the majority Sunni Turks in Turkey. The groups characterize their relationship as “two states, one nation.”

The latest escalation has Armenians on edge.

“We understand this is an existential issue, not just a war,” said Hovhannes Hovsepian, pastor of the Evangelical Church of Armenia in Yerevan, Armenia’s capital.

“We never do anything to escalate the situation, or take the land of our neighbors. We are for peace—but sometimes you have to fight for it.”

The conflict goes back over 30 years—or maybe 100.

According to international consensus, Nagorno-Karabakh is Azerbaijani territory. UN resolutions have called on all “occupying forces” to withdraw.

In 1987, Armenians in Nagorno-Karabakh petitioned the USSR to add the region to the Armenian Soviet Republic. While consolidating the Caucasus in the 1920s, Stalin placed it under Azerbaijani control, placating Turkey.

Both before and after independence in 1991, Armenians and Azeris engaged in demographic battles. Over 30,000 people were killed, and a million displaced. The two nations swapped about 250,000 people as minority groups were expelled or fled to their ethnic- and religious-majority nations.

Thousands of minority Azeris left Nagorno-Karabakh. Its Armenian population declared independence in 1992, while Armenia occupies the land in between to connect with its own territory.

“All wars have an evil side,” said Paul Haidostian, president of the evangelical Armenian Haigazian University in Beirut, Lebanon.

“But spiritually, as important as legal boundaries are for the world order, they are only one standard. Self-determination, dignity, and the 1,700-year Christian testimony of a land are also very important.”

In formerly Armenian-held land, Azerbaijan has destroyed sixth-century khachkars, ornately carved headstones from a Christian graveyard, according to reports. Muslim cultural heritage was also destroyed in the conflict, though some mosques were controversially rebuilt by Armenians.

Though Azerbaijan denies the khachkar destruction, Haidostian fears also for the heritage of ancient churches and monasteries in Nagorno-Karabakh—and even a massacre, if Azeris regain control.

Meanwhile, he said the Armenian diaspora in the Levant is united in support—and concern.

“Armenians feel this is a continuation of the annihilating policies of pan-Turkism,” Haidostian said.

“Every inch is to be protected.”

But the overlap of religion, ethnicity, and politics makes some uncomfortable.

“The Armenians have learned they get Western support by making this conflict about Christians and Muslims,” said Johnnie Moore, a member of the US Commission on International Religious Freedom who has personally traveled frequently to Azerbaijan with a Jewish rabbi.

“Armenia is allied with Russia and Iran. This is not as simple as people are making it.”

Moore, president of the Congress of Christian Leaders, said he has stressed with his local contacts the need for an immediate ceasefire and negotiated settlement before the situation spirals out of control.

And politically, Azerbaijan represents the essential link for trade and energy between Europe and Asia, Moore said, bypassing Russia and Iran. A brief military flare-up this summer took place not along the “line of contact,” but 190 miles away in Armenia’s north, nearest the oil and gas pipelines.

Some analysts say that Russia—which sells weapons to both sides—is allowing this escalation to linger in order to pressure Armenia’s liberalizing government. Others say Turkey is playing in Russia’s backyard, as a message to Moscow to yield in Syria.

Azerbaijan, meanwhile, has seen its regional power grow since acquiescing to the 1994 Minsk Group settlement that left Armenians in control over Nagorno-Karabakh. Its oil and gas revenues led to a 20-fold increase in military spending between 2004 and 2014, which is two times Armenia’s entire state budget.

Many of the Shiite nation’s weapons are imported from Israel, including the “kamikaze” drones that have brought high-tech warfare to the conflict. Armenia has withdrawn its ambassador from Tel Aviv in protest.

Amid the complicated geopolitical realities, should evangelicals simply support the Christians?

The pipeline is a minor issue, he said. Armenia must be allied with Russia as it is the regional power broker. And in the early 1990s, with borders closed by Christian Georgia and Sunni Turkey, it was Shiite Iran that supplied Armenia with needed fuel.

“Politics is about national interests and calculations, not moral or spiritual principles,” he said.

“But if the church in America will not support the Christian nation, however nominal, who will they support?”

No one, said Moore. As this is a conflict over land—not religion—it is best to stay neutral and urge both sides to negotiate.

Azerbaijan is willing, he believes.

“Christians shouldn’t instinctually support Armenia just because it is a majority-Christian country,” he said. Doing so could strengthen Iran, while Azerbaijan is allied with Israel.

“This conflict needs to be turned down, and not given oxygen by religious passions.”

There is much of that in Lebanon, with its sizable Armenian minority, said Martin Accad, chief academic officer at the Arab Baptist Theological Seminary in Beirut. His social media has been flooded with statements of support.

Accad said he has not studied the issue sufficiently to weigh between the two nations, though he notes with concern the Syrian militants reportedly developed by Turkey.

But he advises a different measure of judgment.

“We are called to support the just cause, not a common religious or cultural belonging,” he said. “Otherwise it is just tribal sectarianism.

“Still, I can only imagine the psychological impact upon Armenians, given their history [of genocide] a century ago.”

Armenia was the first nation to accept Christianity, in A.D. 301. While only 1 percent evangelical today, 93 percent of its population of 3 million belong to the Armenian Orthodox Church.

The AMAA, established in 1918 to assist genocide survivors in the Ottoman Empire, today operates in 24 countries. Its largest missionary outreach is in Armenia, where it began work following a 1988 earthquake that killed 60,000 people.

But the evangelical movement began far earlier, when an 1860s revival spread through Anatolia to reach even into the Nagorno-Karabakh mountains. Today the region has one Armenian Evangelical church and three Christian education centers, with 22 churches in Armenia proper.

“Our main mission is to reach the people and spread the gospel,” Hovsepian said. His church in Yerevan serves over 200 families.

Relations of late are good with the Orthodox “mother church,” with whom they cooperate in the Bible Society. But while the nation has experienced some revival along with a renewed focus on Christian education, there is still a lack of emphasis on the Scriptures.

So while the younger Hovsepian waits for a phone call drafting him into the army, Nercessian scrambles to answer the phone calls reaching out for assistance. Whether a political or a religious conflict, it is hitting a Christian nation.

“We are a small enclave of spiritual light in a dark region,” said the AMAA missionary. “We were there, we are there, and we will be there still.”

Correction: An Anatolian revival began in the 1860s, not the 1920s as this article initially stated.