Coronavirus claims life of Malawi leader known as the “Billy Graham of Africa.”
Jeremy Weber|January 20, 2021 02:40 AM 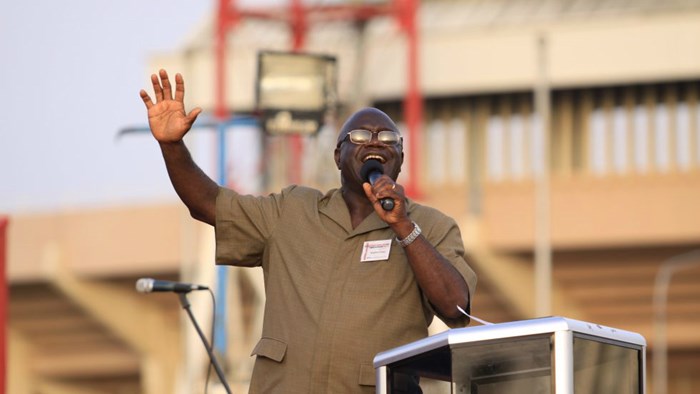 Stephen Lungu, a beloved African evangelist and retired leader of African Enterprise (AE), passed away Monday morning after being hospitalized with COVID-19 complications in Malawi. He was 78.

“We all prayed. However, it has pleased the Lord to rest him,” Stephen Mbogo, who succeeded Lungu as AE’s international CEO in 2014, told board and team members “with great sadness” in a January 18 bulletin.

He cited Psalm 116:15: “Precious in the sight of the Lord is the death of his faithful servants.”

Mbogo noted that few colleagues and supporters would be able to attend the funeral, due to public health restrictions to combat the coronavirus. More than 300 people joined a private Facebook group to watch Lungu’s burial.

Pre-pandemic, many more would have come to honor the man often referred to as “the Billy Graham of Africa.”

“To be sure, there will be thousands and thousands of people in heaven because of Stephen Lungu,” stated Michael Cassidy, honorary chairman of the Lausanne Movement for World Evangelization, who founded AE in 1961 while a student at Fuller Seminary.

“I have known many preachers over the years in African Enterprise, and beyond it, but I don’t think I have ever known a more passionate and endlessly energetic preacher of the gospel than Stephen,” stated the South African evangelist. “None of us could ever match his energy or his day and night sharing of the gospel, whether from public platforms or in shops and restaurants.”

Lungu grew up abandoned and abused at age seven on the streets of Salisbury, Rhodesia (pre-independence Harare, Zimbabwe), and became leader of The Black Shadows gang. As AE noted in its tribute:

Steve hated God for what had happened to him and he hated white people who had ‘everything’ while Blacks starved. Aged 18 when the Rhodesia/Zimbabwe liberation struggle began, he was ready to use his gang to fight for freedom. Little did Steve know that in the midst of this time of national revolution, there would come an inner revolution in his life.

In his well-known testimony, Stephen recounts an evening where, in his late teens, he took his gang to throw petrol bombs into an evangelistic tent meeting in the capital city of Harare. As they awaited the appointed time to do this, the words of the preacher penetrated Stephen’s heart and he ended up staggering forward to give his life to Christ instead.

Lungu was discipled by Patrick Johnstone, missionary author of the Operation World prayer guide, and became an evangelist. He first served with Dorothea Mission, then as AE’s team leader in Malawi for decades before succeeding Cassidy as the ministry’s international leader from 2007 to 2013.

Lungu proclaimed the gospel to crowds around the world, including a notable gathering in Ethiopia.

“A year after the 1991 fall of Colonel Mengistu in Ethiopia, under whose reign Christians were persecuted, churches with AE organised a rally in Addis Ababa in which thousands turned up,” Ben Campbell, CEO of AE Australia, toldEternity News. “As a result of Lungu’s sermon and ‘altar call,’ 10,000 people came forward to accept Christ, with 900 event administrators kept busy all day processing the decision cards.”

“A giant has fallen among us,” said Francis Mkandawire, general secretary of the Evangelical Alliance of Malawi.

“The Christian history of Malawi will never be told without mentioning the name of Baba Stephen Lungu, as he was fondly called. Stephen was more than a preacher to many of us in Malawi; he was a father,” said Mkandawire. “Stephen remains one of the few men who continued to mentor the emerging generation of preachers without seeing them as competition.”

“If there was a contemporary African evangelist and global leader I knew who through the powerful witness of his own life story was ‘so eager to preach the gospel, who was not ashamed of the gospel, who believed in the gospel as that brings salvation to everyone,’ it was our dear brother,” said Nana Yaw Offei Awuku, Lausanne’s previous regional director for English- and Portuguese-speaking Africa (succeeded by Mbogo) who was mentored by Lungu, referring to Romans 1:15–16.

“Out of the abundance of the love of Christ that captured his heart from the jungles, Stephen laughed loudly and loved lavishly all across cultures,” Offei Awuku, who now directs Lausanne’s generational initiative, told CT. “As a true witness of God's grace, Stephen saw hope in situations against hope.”

“I will always remember Stephen Lungu’s passion and energy to preach a Christ-centered message everywhere he was invited,” Emmanuel Kwizera, Lausanne’s Catalyst for Proclamation Evangelism and AE’s international missions director, told CT. “Stephen was very energetic to preach evangelistic messages regardless of the size of the audience.

“Baba Stephen, you have inspired thousands of emerging evangelists through your passion and zeal of evangelization. After Billy Graham, Stephen Lungu … I totally believe that the next chapter belongs to us.”

Lausanne and AE had planned to convene 1,500 evangelists from 54 African countries last month in Nairobi, but due to the pandemic had to reschedule the landmark gathering for December 2021.

Michael Oh, executive director and CEO of the Lausanne Movement, said Lungu was a strategic leader of the Mission Africa initiative after Lausanne’s third congress, held in Cape Town in 2010.

“[He] embodied the description of the early disciples in Acts 4:13 so well, not only in the commonness of his ‘I’m a nobody’ background but especially in the recognition of all who knew him of his boldness in his witness and the undeniable fact that he had been with Jesus,” Oh told CT. “I am eager to see how the next generation of African leaders impacted by his mentoring will step into roles of global influence for the gospel.”

Note: This obituary will be updated.