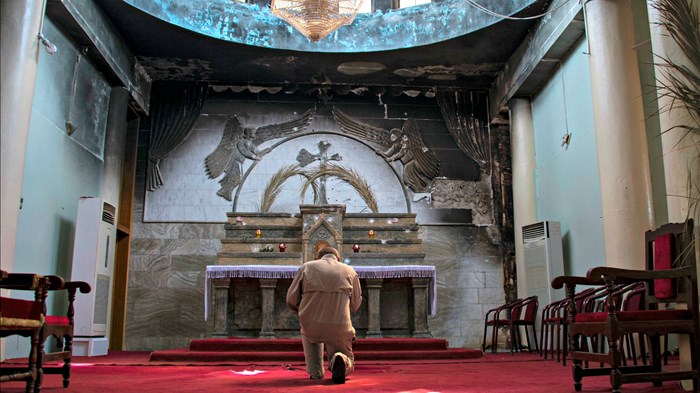 Image: Fadel Senna / AFP / Getty Images
An Iraqi Christian prays in a church in Qaraqosh, a city in the Nineveh Plains near Mosul, in May 2017.

If Pope Francis can avoid the complications of COVID-19 travel and get to Iraq in March, he will hear a lot about stolen property. Muqtada al-Sadr, a leading Shiite politician fiercely opposed to the US military presence, has told Christians he will do something about it.

The issue is not new.

As Iraq’s pre-Gulf War Christian population of 1.25 million dwindled to about 250,000 today, opportunistic non-Christians laid claim to their unoccupied homes and lands. The city of Mosul, next to the traditionally Christian Nineveh Plains—where Pope Francis is scheduled to visit— located 220 miles north of Baghdad, provides telling examples of the problem.

In 2010, in the waning days of official US occupation, Ashur Eskrya’s father decided to sell his family home. Years of chaos had depleted the once 60,000-strong Christian population of Iraq’s second-largest city, representing 10 percent of its total. Property values were plummeting. Especially in hindsight, Eskrya felt fortunate to get 25 percent of its market value.

Four years later, his neighbor got nothing.

ISIS invaded Mosul, putting its Christian population to flight. In 2015, the International Organization for Migration (IOM) surveyed 240 individuals displaced by the fighting throughout Iraq. Nearly 9 in 10 (89%) had their homes confiscated.

A 2014 study estimated that ISIS made more money from selling stolen real estate than it did from oil revenue.

After the liberation of Mosul, some Christians returned, including Eskrya’s neighbor. While 42 percent had lost their property documentation altogether, according to IOM, the neighbor was able to enter a lengthy legal process and eventually regain ownership of his home.

But uncomfortable with the security situation, he returned to Erbil, 55 miles east of Mosul in Iraqi Kurdistan, where thousands of displaced Christians still reside.

He lives there today with his children, which is more than a third family can say.

This neighbor benefited from Mosul’s earlier oil boom, and lived in a home valued at $1.2 million in one of the plush city districts. But in 2006, his daughter was kidnapped and killed. In 2012, another daughter tried to emigrate through Syria, and was killed there.

The parents eventually moved to Australia—with the deed to their home. But last year, they were stunned to receive news from neighbors about new renovations. A company was redesigning the home, and presented a deed of ownership.

The case is now being adjudicated in court.

“There are many cases like these,” said Eskrya, president of Assyrian Aid Society–Iraq. “False papers are sold by those connected to influential figures in the justice ministry, who oversee the real estate market.”

Even prior to ISIS, the IOM study noted at least 600 confirmed cases of property seizure in Mosul, mostly from Christian owners residing in the diaspora. Justice Ministry issues began as early as 2006. The official Iraq Property Claim Commission has only been able to enforce 8 percent of its final rulings.

Both the church and the government have tried to rectify things, Eskrya said.

As a safeguard for Christian property, in 2010 a regulation was established requiring sales to be signed by either a church representative or Christian member of parliament.

And in 2017, after the defeat of ISIS, the government created a commission with official church representation that was able to resolve some cases.

“The government is very busy with the elections, the problem of security and militias, as well as the pandemic and the economy,” Raphael Sako, patriarch of the Chaldean Catholic Church based in Baghdad, told CT.

“For them, this is something marginal, and we understand that.”

Recognized as the second-most influential religious figure in Iraq through a study conducted by the US Institute of Peace, Sako consistently meets with national leaders to urge the application of citizenship and rule of law.

Last year, he canceled Christmas to object to the killing of nonsectarian protesters demonstrating against corruption. But this past Christmas, the government honored his longstanding petition, making the holiday a permanent national celebration.

Sadr, the Shiite cleric, sent a representative to offer congratulations, who presented Sako with a new initiative.

Head of the largest political alliance with 16 percent of the parliament’s seats, Sadr also commands the allegiance of many Shiite militia groups. Following the US killing of Iranian general Qassem Suleimani, he led hundreds of thousands of demonstrators to peacefully call for Iraq to expel the American military.

Sadr’s envoy provided Sako with details of how Christians can submit their ownership documents electronically, pledging to achieve justice for their claims. He emphasized this includes properties involving his aligned militias.

“This is the job of the government, not Sadr or a political party,” Sako said, while welcoming the initiative. “But it is a good sign of solidarity.”

“Sadr alone is not enough, it has to be adopted by parliament and all the parties,” he said. “But we are happy with anyone who tries to help, and I hope that in the end it will show Christians that they still have a place in Iraq.”

Prior to Christmas, Bashar Warda lamented the frustrating lack of progress.

“There is no redress for those who have lost properties, homes, and businesses,” stated the Chaldean Catholic archbishop of Erbil.

“[Many] Christians have nothing to show for their lives’ work, in places where their families have lived, maybe, for thousands of years.”

Given Sadr’s connection to the militias, his initiative has been met with some skepticism. And the US State Department’s International Religious Freedom Report noted another member of parliament who actively facilitated the relocation of Iraqi Sunnis and Shiites into Christian areas, through aligned militias.

But as early as 2016, Sadr was speaking out on behalf of Christian properties.

It may be that he can make a difference.

“This committee shows he is serious, and gives a message to the other militias,” Eskrya said. “And while it has raised awareness of the issue, it is still a sort of gang system, and people suffer if they don’t have good connections.”

As a politician, Sadr has been wily. Often alternating his alliances and political stances, he first supported the nonsectarian protests against corruption, then sent his supporters to attack them. While this action contributed to the eventual petering out of the movement, the demonstrations still forced the resignation of the prime minister and early parliamentary elections.

Both Eskrya and Sako suspected the initiative may be part of Sadr’s effort to position himself as a neutral figure, eyeing next year’s vote.

Sako told CT his lawyer is currently working with the government on about 1,250 cases of confiscated property. Only 50 have been solved so far, though other private initiatives have reported some success.

Several of these files were shared with Sadr.

“They will try,” said Sako. “But we are expecting deeds, and not only words.”

Meanwhile, the patriarch awaits the visit of Pope Francis.

The pontiff has now put his trip to Iraq in doubt, wary of COVID-19 transmission among the expected large crowds. But last week, the Vatican issued an official logo and motto for the visit: “You are All Brothers,” taken from Matthew 23.

“Pope Francis will encourage Christians to persevere, to hope, and to trust their neighbors,” said Sako. “But he will also speak with political and religious authorities about harmonious coexistence.

“They must take care of these Christian issues—as they should for all citizens.”