The annual event is asking participants to “stay home” for the first time since Roe v. Wade.
Kate Shellnutt|January 15, 2021 03:29 PM 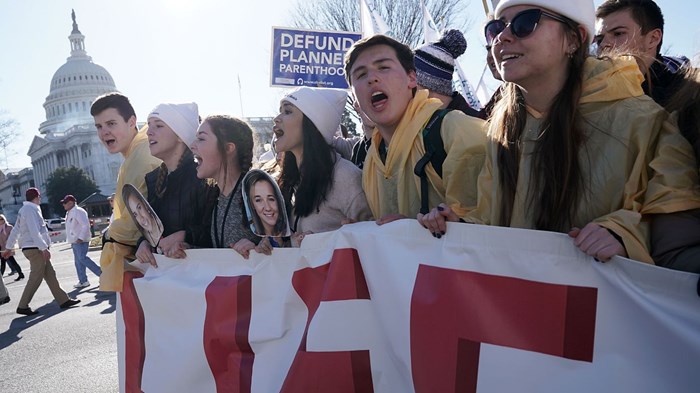 The National March for Life, the biggest pro-life rally in the country, has asked hundreds of thousands of supporters to stay home for the January 29 event, citing the pandemic and security concerns around the Capitol.

It’s the first January since the 1973 Roe v. Wade decision that pro-lifers won’t be gathering in DC to march to the Supreme Court to signal their opposition to abortion. In 2016, the march went on despite DC shutting down before a blizzard that brought nearly two feet of snow.

March for Life organizers shared the change in plans on Friday, inviting participants to a virtual event instead. The National Park Service had announced that the National Mall will be closed through at least January 21, the day after the inauguration, and DC is also under a state of emergency until then.

“The protection of all of those who participate in the annual March, as well as the many law enforcement personnel and others who work tirelessly each year to ensure a safe and peaceful event, is a top priority of the March for Life,” said March for Life president Jeanne Mancini.

While Catholics traditionally took the lead in organizing and attending the rally, the Protestant cohort has grown over the years, including the addition of a corresponding Evangelicals for Life conference five years ago. This year’s speaker lineup included prominent evangelical leaders Jim Daly, Focus on the Family president, and J. D. Greear, the first Southern Baptist president to address the event.

Organizers plan to have a small group of Christian leaders still march in-person to represent the larger group that typically descends on DC for the march, Mancini’s announcement said. As of Friday, Daly was still planning on attending the event in person, according to a Focus on the Family spokesperson. Tim Tebow is scheduled to offer a keynote at a virtual gala following the march.

Attendance was already expected to be down at the event due to the coronavirus. Organizers had planned to require face masks, display signs about social distancing, and urge those with symptoms not to come.

Some state and local marches—including in Arkansas, Hawaii, and Oregon—recently opted to cancel or postpone this year’s in-person gatherings due to “political unrest and the continuing COVID-19 pandemic.”